Spoilers: Herein the biggest twist in The Manchurian Candidate is revealed 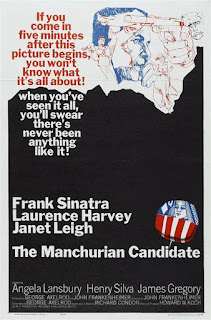 Korean War hero Raymond Shaw (Laurence Harvey) is cold, uncommunicative, reserved and difficult. So why, when asked, does everyone in his platoon say “Raymond Shaw is the kindest, bravest, warmest, most wonderful human being I’ve ever known in my life”? Welcome to the world of sinister brainwashing and mind-control. Welcome to The Manchurian Candidate.

Shaw returns from the war in Korea as a Medal of Honour winner. He saved his entire platoon – with the exception of two casualties – under heavy fire and is America’s blue-eyed-boy, already being hijacked by his ambitious mother Eleanor (Angela Lansbury) as a prop for the Presidential campaign of her second husband, her McCarthy-like puppet Senator John Iselin (James Gregory). But if things are fine and dandy, why does Shaw’s commanding officer Major Marco (Frank Sinatra) keep having a recurring nightmare of a hypnotised Shaw calmly murdering those two casualties in front of an audience of Russian and Chinese officers? Can Shaw be all he seems – or is he the new secret weapon in a deadly Cold War?

A film born at the heart of the paranoia of the sixties – it premiered shortly after the Cuban Missile and would be followed a year later by the assassination of JFK by the Shaw-esque Lee Harvey Oswald – The Manchurian Candidate captures the mood of its time in a way few other films have done. On top of which, it’s a brilliant, edge-of-your-seat ride, crammed with complex psychology and chillingly cold-hearted violence, directed with a more than a splash of cinema verité and plenty of panache by John Frankenheimer at the top-of-his-game. Touches of satire on politics and the media, are mixed with a terrifying fantasia on the powers of mind control. There is no other film that drips with as much sweat as this one (just look at some of those faces!) or plays more brilliantly into our own fevered nightmares of how we can be turned against ourselves.

The action in the film is dealt with all the expertise of a card sharp. The opening scene already tips us the wink about the lies in the memories of our heroes: not only do the soldiers clearly despise Shaw, as he plucks them out of a seedy bar in Korea, but we later see them bundled up by Commie soldiers into waiting helicopters. So, we’ve already got a pretty good idea why Sinatra’s Major Marco is as twitchy and sweaty as he is – and we’re immediately suspicious of just how Shaw managed to get his hands on the Medal of Honour (and why, perhaps, he doesn’t seem that happy about it – as if he already subconsciously knows he doesn’t deserve it).

The truth is revealed to us in an extended sequence that’s a tour-de-force or imaginative visual technique, that Frankenheimer doesn’t get enough credit for. Marco’s dream starts in a genteel hotel in America’s South, with a polite middle-class lady giving a talk about flowers on stage, surrounded by the platoon. The camera moves from the stage in a smoothly uninterrupted 360 turn looking at the audience of similarly middle-class, middle-age belles, before returning to the stage where the hotel backdrop has been replaced by huge banners of Stalin and Mao and our genteel lady has turned into a sinisterly jovial Chinese scientist. 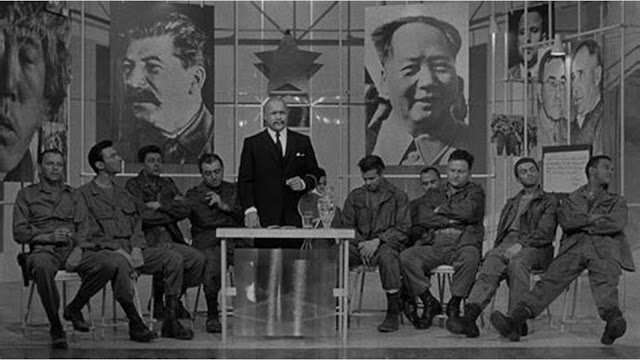 During the sequence that follows, the camera shifts constantly from the subjective (Marco’s false memory of the hotel and ladies) and the objective (a surgical observatory pit with watching Communist apparatchiks), while never interrupting the chilling scientific explanation from Khigh Dhiegh’s (brilliant in every way) scientist. During this inspired barrage of false and true memories, spliced with alarming moments of violence, we witness just how far Shaw’s brainwashing programming has gone as, with complete politeness, he goes about shooting one soldier in the head and quietly strangling another. No wonder Marco – and the other soldiers who all share versions of the same nightmare – wakes up screaming every morning.

And why did they pick Shaw? Well obviously, his mother-fixation already makes him more than susceptible to external control (under hypnosis he describes Marco as his best friend – something that, Dr Lo points out, speaks volumes for his inclination to prostrate himself to authority). Played with an austere distance by Laurence Harvey – the film expertly uses Harvey’s prickly air of patrician woodenness – Shaw is desperately weak-willed and a natural follower, who has never escaped his mother’s influence. He’s already a lonely man, nursing heart-break, loathing the brashness around him with an elitist hauteur, but lacking the force of character to do anything about it. No wonder he’s ready to be reprogrammed.

And of course, there is no controller he is more likely to follow than his mother. Angela Lansbury excels in her finest, most iconic screen role, as Shaw’s ambitious, deadly, controlling and manipulative mother. Is there a finest reveal, than her sudden invitation at a fancy-dress party for Shaw to “pass the time by playing a little Solitaire”? The film skilfully suggests that it is power rather than ideology that motivates Eleanor – even before the reveal she’s clearly the brains in the marriage with her dull husband, and a forceful, overbearing presence to her son. It’s revealed she’s already wrecked poor Shaw’s life – forcing him to jilt his true love Jocelyn (Leslie Parish), because marriage to the daughter of a political rival ain’t part of the plan. Maybe as well she’s motivated by the unsettling air of incest between the two of them. 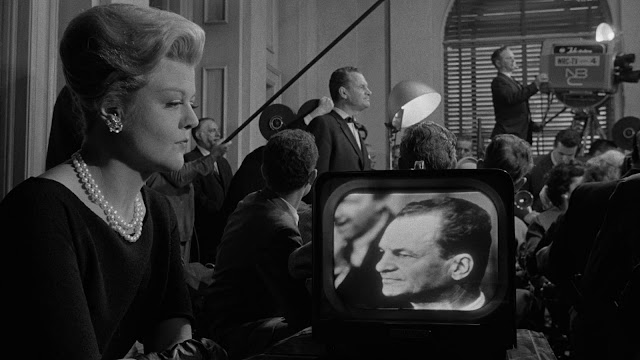 No wonder Marco starts to feel sorry for him. Sinatra is very good in this film, striking a perfect balance between twitchy unease and a growing fatherly concern for Shaw. Notoriously a one-take actor (a key scene where Sinatra appears slightly out-of-focus – an effect that suggests we are seeing him from the screwed up Shaw’s perspective – was in fact because Sinatra was most effective in the first take, but the camera was incorrectly set-up), Frankenheimer uses his presence extremely well. He has a brutal fight scene that uses every inch of his energy, while he’s not afraid to add a touch of vulnerability into his burgeoning relationship with Janet Leigh’s stranger on a train (despite an initial scene that suggests all sorts of intriguing possibilities, this is a rather thankless part for Leigh, which she still performs expertly). Like Harvey, his face is frequently studied dripping with sweat.

It’s all shot with a brilliantly immediacy. A press conference – where Iselin (the McCarthy satire is hilariously wicked) rants about Commies in the State Department – is shot with such observatory skill, it feels alarmingly real. Moments of lightness – the slightly dreamy flashbacks of Shaw and Jocelyn running playfully together near the sea – are immediately punctured by terrifying moments of unsensational suddenness, none more so than when a programmed Shaw assassinates Jocelyn and her father (the bullet passing through a carton of milk in his hand, which pours out across the floor). It culminates in a race-against time that’s played out with a hair-raising tension.

The Manchurian Candidate combines skilful acting with real cinematic force and invention from Frankenheimer. It creeps into the darkest corners of our mind and invites our nightmares to come out to play. Dark, at times even blackly comic, it’s possibly the finest and most influential conspiracy thriller ever made.