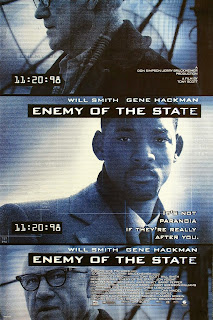 A congressman (a cameoing Jason Robards) is murdered for refusing to support intrusive new counterterrorism legislation championed by NSA director Thomas Reynolds (Jon Voight). Unfortunately, someone caught the killing on camera. When the NSA come hunting, he plants the recording on an unwitting lawyer friend, Robert Clayton Dean (Will Smith). Dean has no idea he has evidence that could blow the conspiracy – and is nonplussed when they set about destroying his life. The only person who can help is mysterious surveillance expert Brill (Gene Hackman), who has spent decades living off the grid. Can the clear Dean’s name and stop the bad apples in the NSA?

Enemy of the State is a fun chase movie, that enjoys the technical possibilities of the surveillance state, packaged with the fast-pace, bright colour-filtered style of Tony Scott (this is one of his best films). There is more than enough wit and enjoyment about it – not to mention watching a host of very good actors, many of them unknowns at the time, bring a lot of sparkle to the film (you’ve got to give kudos to the casting director). Everything of course gets tied up in a neat, pretty bow but it’s a damn lovely bow so that’s fine.

In its detailed look at the power of the surveillance state, Enemy of the State was, in a way, ahead of its time. The ability for the intelligence agencies here to look into literally everything in your life is pretty unsettling, from bank details to computer accounts. Every camera is an eye and satellites are tasked at will to watch anything. In fact, it’s quite something to remember that the state is only more powerful today – the internet and mobile phones would making tracking Dean even easier than the bugs they secrete about his person, which causes him to flee our baddies stripped to his undies. (Also, if only Reynolds had waited a few years, congress would wave through legislation such as he is requesting here, without batting an eyelid).

The film also dares to shade a little bit of naughtiness into Will Smith’s character. Sure, he’s a crusading labour lawyer (we’ve got to know he’s on the right side!) but he’s also an adulterer with trust problems in his marriage. Smith’s still at his charming best here, and his frazzled desperation as he struggles to understand why on earth the NSA is destroying his life is well-handled. Regina King gets a thankless role as Dean’s shrill wife, whose trust in her husband oscillates according to the requirements of the script, rather than any internal character logic.

Enemy of the State sometimes teeters on the edge of making a point about the dangers of the surveillance state. How easy could it be to abuse this power? Unfortunately it puts most of these arguments into the mouth of Regina King’s holier-than-thou wife, which rather undermines them. It’s also made abundantly clear that we’re witnessing rogue agents. This allows the film to focus more on the cool things surveillance can do, rather than clearer moral statements about whether that’s right or not, other than it being a dangerous tool in the hands of the wrong men.

Scott’s film is more of an entertainment than a treatise though (and thank God for that). It also has a nice little touch of 1970s’ conspiracy thriller to it, something the film leans into with the casting of Gene Hackman in a role reminiscent of Harry Caul in The Conversation. Sure, I can’t remember Caul driving a car while it was on fire or blowing up a building, but Hackman still gives the film some class and a touch of old-school espionage and cynicism. Truth-be-told, other than profession, Caul and Brill have very little in common (Brill is far more confrontational and confident, and much less likely to rip his apartment apart) but it’s still a nice call-back. I also rather enjoy Gabriel Byrne’s smart, playful little cameo as ‘fake’ Brill (hardly a spoiler as you can’t move without knowing Hackman is in the picture).

Scott’s high-energy fun culminates in a smart little trap laid by Dean for all his enemies, that plays nicely off the fact that the NSA agents and the Mafia are definitely paranoid and stubborn enough to not realise they are all talking at cross-purposes. The end of the film sees everything back to normal (it’s unclear how, or if, Dean got his job back considering his unceremonious firing), but I wouldn’t worry about it. It would be nice if it had said more, but as a rollercoaster ride it’s short, sharp and sweet.