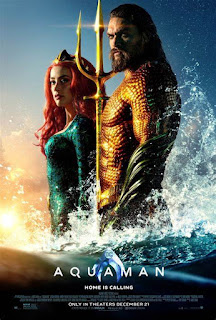 After helping the rest of the Justice League save the world Arthur Curry aka Aquaman (Jason Momoa) is quite the celebrity. Curry is the son of lighthouse keeper Thomas (Temuera Morrison) and Atlantian Queen Atlanna (Nicole Kidman), who fled her unloved husband and his underwater kingdom but was recaptured when Arthur was young. Her other son Orm (Patrick Wilson) is now King of Atlantis, planning to lead the forces of the sea in a war against those on land. Can Arthur and Orm’s unwilling betrothed Mera (Amber Heard) combine to prevent a war? And will Arthur become a worthy hero?

Aquaman makes a valiant effort to embrace perhaps the silliest set-up for a comic book novel yet. Based around a massive, technologically advanced underwater kingdom that has (inexplicably) remained silent and secret for thousands of years, who inhabitants all seem to have superhuman strength and magical skills (guess it must be all that water pressure), the film at times is hard to take seriously. But it sort of gets away with it, as Wan leans into the tongue-in-cheek campness of all this (and I’m amazed how camp these Atlantians are) and asks us not to take anything we see that seriously, but just to sit back and enjoy the ride.

And the film is basically just a big ride, as we travel from place-to-place and watch Aquaman hit things in various under-water and above ground locations, while keeping up a bit of rapid-fire banter that will flower (but of course!) into an opposites-attract romance with Mera. One thing Wan does very well is to find a way to present the various fights in a style I’ve not seen before. The showpiece one-on-ones take place in a series of incredibly smooth one-shots, which twist and glide around our heroes while they despatch countless foes and, in one impressive show-piece, in and out and across buildings during a fight in an Italian cliff-side town. The ending may be your typical CGI smackdown, but Wan’s presents the fights in a way that actually looks different and excites a bit of awe.

Where the film is less successful is in its slightly tired coming-of-age/proving-his-worth/resolving-his-loss storyline, which offers few surprises. Try as I might, I can’t find Jason Momoa a charming enough actor to effectively make me invest in his character. Compare him to Dwayne Johnson, who is always willing to laugh at himself and is the very embodiment of charming self-awareness. Momoa takes himself very seriously – he always needs to be the coolest guy in the room – and his air of cocky self-importance sometimes jars in a film as dopey as this one.

This also means the film fails to sell a real plot arc for Aquaman himself. Its nominally about a character learning to acknowledge his mistakes, vulnerability and inability to go-it-alone. This doesn’t always feel earned and sometimes emotionally confused. One of Aquaman’s earliest acts is to let the ruthless father of a hijacker (a scowlingly charismatic Yahya Abdul-Mateen II) drown. Later he expresses regret for doing this as, by making an enemy, he endangered Mera. Not regret because it was wrong to let the man die, but a sociopathic concern for his loved ones rather than someone else’s. The character’s growth never really convinces – he still seems like the same cocky maverick at the end than he was at the beginning, rather than someone who has matured into a real leader.

But aside from these doubts, this is a big silly pantomime pretty much told with the right balance between seriousness and tongue-in-cheek. Amber Heard mixes heroism with a dopey, flower-eating sweetness as Mera. Willem Dafoe constantly looks like he’s about to snigger as a wetsuit glad Grand Vizier. There is something rather lovable about a film so eclectic in its cast that Julie Andrews (of all people) voices a sea monster and Dolph Lundgren tackles King Nereus like it’s his shot at Macbeth.

Bangs, booms and few jokes carry us through a deeply silly but enjoyable film. There is a great deal of visual imagination for the sea kingdoms, a mix of Greek inspired nonsense and space-ship bombast. Wan pretty much throws the kitchen sink at the screen, and while it’s definitely rather too long it’s also bubbling with just as much tongue-in-cheek fun that you roll with it. Nothing here reinvents the wheel – and the plot often feels like a rather clumsy after-thought – but it’s still an entertaining wheel.