Spoilers: The incredibly grim and depressing ending of The Mission is discussed in detail. 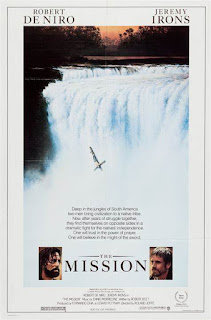 When the world is run by men, how much of a voice does God have? Roland Joffé’s film explores colonial politics and religious duty in Spanish and Portuguese controlled South America. Needless to say, God doesn’t get that much of a vote when questions of land ownership, slavery and money are in play – and no noble stand from Jesuit priests is going to make a jot of difference. Joffé’s beautifully made and moving epic might be slightly self-important, but it won the Palme d’Or. With powerful imagery and sequences but some under-explored themes and characters, its one of those films that probably would have benefited from being at least an hour longer.

In the Paraguayan jungle in the 1750s, Jesuit priest Father Gabriel (Jeremy Irons) successfully converts a Guarani community at his mission. Problem is to the Spanish and Portuguese empires the Guarani are fit only for exploitation and slavery. Mercenary slaver Rodrigo Mendoza (Robert de Niro) is one of them – but his world collapses after he murders his brother (Aidan Quinn) in a dispute over the woman (Cherie Lunghi) they both love. Mendoza makes his penance with the Jesuits, and the forgiveness he receives from the Guarani changes his life, leading to his conversion. But when a treaty – with the reluctant agreement of papal legate Cardinal Altamirano (Ray McAnally) – calls for an end to the mission, Gabriel and Mendoza resolve to fight: one with prayers the other with the weapons he has sworn off. Can they help the Guarani defend themselves from colonialism?

I don’t think its too much of a spoiler to say, no they can’t. The Mission may occasionally muddle itself by trying to say a lot in a short run-time, but on one thing it’s clear: the world is what men have made it, and they’ve made it a pretty dreadful place. The final quarter of the film is entirely given over to the spirited fight to protect the mission, as Mendoza and the other priests take up arms to help these people defend their homes. Joffé doesn’t gloss over the hideous cost of this, with a staggeringly high body count. The Europeans don’t differentiate between combatants and non-combatants, and the killed (and everyone is killed) fall with a sickening finality.

Watching the senseless destruction of this entire community for no purpose other than stripping the Guarani people of anything of value and shipping it back to Europe, you can only agree with Cardinal Altamirano that perhaps it would have been better for all concerned if ships had never crossed the Atlantic. When the dreams of bringing Christian civilisation end with Father Gabriel leading a march of peaceful converts into a hail of bullets, something has gone badly amiss in the world. Hammering home how helpless decency is, Mendoza is fatally wounded (and the village finally doomed) when he is distracted from destroying the bridge into the village, by running to safe a wounded child. No good deed goes unpunished in The Mission.

All of this is, by the way, immensely moving. It’s a tribute to Joffé’s quiet, coldly realistic eye for violence among the natural world that the final half hour is a hard watch. The European invaders may be faceless, scruffy monsters, but even they are briefly halted by the sound of prayer from the village (before they burn it down and kill everyone). The Mission is a profoundly beautiful film, which strains hard for spiritual meaning, and this final sequence is almost impossibly tragic to watch. Just as he had done in The Killing Fields, Joffé’s ability to report without sensationalism on real life tragedy, amongst scenery of great beauty, makes for powerful viewing. 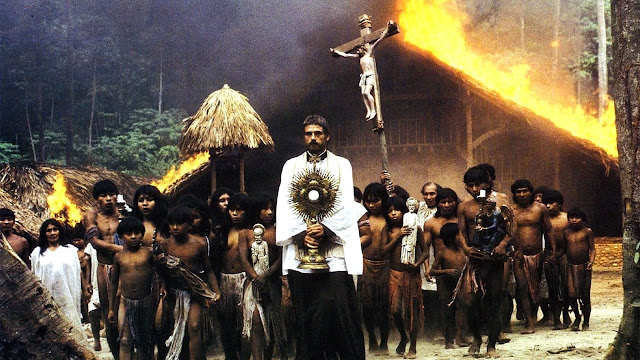 There is so much right about The Mission, it feels harsh criticising it. The film was shot entirely on location (at times the cast show clear signs of the jungle-tummy that spread like wildfire through the cast and crew) and Chris Menges’ (Oscar-winning) cinematography captures the exotic beauty of the jungle, with a powerful visual sense of the spiritual and the sublime. It’s an effect built on immeasurably by Ennio Morricone’s extraordinary score (one of the greatest ever recorded), every single note perfectly chosen to communicate the holy serenity of the Jesuits and the dark flaws of mankind.

Its in exploring those flaws that the film feels a tad rushed. I dearly wish this was an hour longer, if for no other reason that it could bring greater focus to the balance between faith and realpolitik in greater depth. Although the Cardinal gets a few moments to reflect on this, and explicitly question the self-appointed right the Europeans have given themselves as masters of the world, the film never quite manages to dive into these. (McAnally however is excellent as this tortured and ashamed man). Too often these ideas are boiled down into “worldly men bad, priests good”.

The role of the Missionaries themselves also goes unquestioned – these are, after all, people who have crossed the seas with the same sort of imperialist missions as anyone else, finding the indigenous tribes and aiming to make them (no matter how decent their motives) as much like the Europeans as they can. Instead there are presented as purely good and holy. Just think what another hour could have done for expanding the insight into the role of the Church here.

There is a few too many blunt statements of intentions and plot information, rather then real insight. You come out of it still with only a most basic idea of why Gabriel and Mendoza make the decisions they do – or what they hope the outcomes might be. More of a dive into the characters could have given more context to their holy intentions.

In the end the film’s main aim is pushing a message of peace. It’s the message Mendoza must learn. The film’s other most successful sequence covers his extraordinary penance, dragging a huge bundle of armour and weapons up a mountain to the mission. De Niro sells the anguish as beautifully as he does Mendoza’s shamed gratitude when he is greeted warmly by the very people he had enslaved. Its moments like this where The Mission achieves its aim of grappling with something close to how spirituality can move and change us – which often gets bogged down elsewhere in ticking off plot.

The message of peace is embodied by Irons’ profound and generous performance as Gabriel, a man who believes the world should be simpler than it is. I just wish the film had given itself more room to delve into its themes. In trying to cover imperialism, religion, spirituality and native rights, all in two hours (the Guarani draw a short story, with not one of them really being given a character) its too much. A richer, more textured film would make for a richer overall experience. It’s a film of great beauty in score and photography, often moving, but doesn’t make its message much more than give peace a chance.