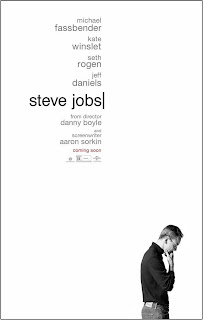 The art of movie biography shouldn’t be slavishly covering every second of the subject’s life. It should be capturing their essence. Steve Jobs does exactly that, a superb distillation of its subject’s life and personality through focusing on the preparation for three vital project launches: the Apple Macintosh in 1984, the NeXT Computer in 1988 and the iMac in 1998, each playing out in real time. The contrasting (and continuing) clashes and tensions at each event – personal and professional – tells us more about the man and his impact than a cradle-to-grave biopic ever could.

It also helps that Steve Jobs has an electric script from Aaron Sorkin. Sorkin approached the project not like a film, but as a classic three-Act play. Steve Jobs is an explosion where all the special effects are the words, held together by pulsating ideas and a sense of rhythm musicians would envy. This is Sorkin at his absolute best, a script with zip and jokes but also a profound understanding of exactly the sort of tunnel-visioned visionary perfectionism Jobs encapsulated, all wrapped up with a beautifully judged emotional through-line. Only Sorkin can make just actors delivering dialogue as dynamic and edge-of-the-seat as a car chase.

And (like The Social Network) his intensely intellectual style, and sense for the frustration of the super-intelligent at the rest of us for not keeping up, is perfect for this tale of the creation of the future of computing. Sorkin uses product launches as a window into how fresh idea can be accepted (or not) by the world. The battles over them, with the focus on small details that communicate the big picture and the difficulties of making others understand the visionary core that makes something work is crucial – and brilliantly delivered here. That’s perfect for Sorkin, who is gifted at making big-picture passionate thinkers sound as brilliant as they are.

But what makes Steve Jobs perhaps his most compelling script, is that he adds an emotional undertone to it. Jobs was a visionary, who understood better than the customer what they really wanted. But he was also a flawed individual. Sorkin’s script makes clear that, like his computers, he was a closed system. Just as the Macs were designed to only work with their own software and not interface with others (Jobs’ gospel, the exclusivity of the product being what makes it special), so Jobs himself built his own conception of the world and refused to let anything outside that influence it, or allow any external factors to change his mind. Decide he was loyal to someone, and nothing they do will shakes that. Decide another has betrayed him, and the system locks them out.

Central to this is Jobs’ relationship with his unacknowledged daughter. From the 5-year-old he reluctantly spends time with, to the young girl he starts to form a carefully emotionally managed bond with to the 19-year old who finally tells him how much she resents his closed-system management of their relationship. Sorkin’s script brilliantly balances an insight into why Jobs might have acted like this (bound up in issues with his birth parents) and the emotional impact it has on the daughter (the hugs not returned, the words not said). Jobs isn’t a bad man - although the script doesn't shy away from his selfishness, or the appalling things he said about Lisa's mother in the press - or a straight-forward terrible dad. He’s just not quite capable (or willing) of giving the emotional commitment needs. It’s written tenderly with a great deal of empathy for both father and daughter.

This emotion is further bought out by Boyle’s dynamic humanism at the helm. It’s a reminder of what a great theatre director Boyle is: this film is basically one of the most dynamic plays you’ll ever see, fast cuts and graphics intermixed with extended one-shot dialogue scenes that allow his actors to flourish. Boyle employs on-screen graphics and montage to move us between the product launches, but isn’t afraid to let his camera serve the dialogue, with the exchanges brilliantly cut to the rhythm of the dialogue.

He also sets out a space for the actors to deliver uniformly superb performances. Front and centre is Michael Fassbender’s transformational performance. He communicates Jobs’ brilliance and his ruthless determination to never compromise. It’s a performance of messianic intensity, but also extremely grounded and real – and, like Sorkin, he understands the heart of the film is the father-daughter relationship. Fassbender carefully hides Jobs’ emotional need, just as he understands the dynamism that wouldn’t allow a hint of vulnerability and arrogance that judges everyone as second-best to himself. He’s a tough, difficult, uncompromising man – but also an egalitarian one, (eventually) willing to acknowledge his flaws, the biggest being his fear of emotion.

Equally brilliant is Kate Winslet as Joanna Hoffman, Jobs’ long-time confidante and ‘work-wife’, manager of each of the launches and a combination of mentor, conscience, counsellor and parent. Jeff Daniels is excellent as the businessman who goes from mentor to unforgiven rival. Seth Rogan gives his finest dramatic performance as Steve Wozniak, here a decent man and computing genius, who lacked Jobs’ ability to “play the orchestra” and shape events to his will.

It’s all wrapped up in a gripping film that feels like a fusion of theatre and film. If it has a problem, it’s that many will find its focus on the nuts-and-bolts of Apple hard to follow (and I confess, the script makes me understand the drama without understanding the product). But its strength is in understanding visionaries, their ability to shape ideas that wouldn’t occur to the rest of us – and the selfishness, and the damage that causes, that often goes hand-in-hand with that. With scintillating acting, skilful direction and, above all, a superb script, Steve Jobs is sharp and engrossing drama.