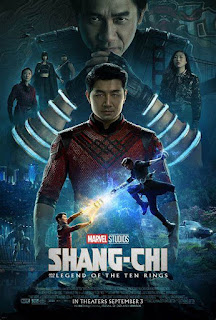 Thousands of years ago Xu Wenwu (Tony Leung) discovered ten rings which gave him immortality and power. Sadly, he used these powers for evil – until in 1996 he falls in love with Ying Li (Fala Chen), the powerful guardian of a mystical village he has searched hundreds of years for. They have two children – but after she dies, Wenwu returns to darkness and trains his son Shang-Chi to become an assassin. Aged 14, Shang-Chi flees: ten years later, Shaun (Simu Liu) works as a hotel valet with his best friend Katy (Awkwafina), both accomplished students with no aims in life.

All that changes when his father’s heavies attack them in San Francisco, stealing the mysterious pendant Ying Li gave to her son. She also gave a pendant to his sister Xu Xialing (Meng’er Zhang) – so Shang-Chi and Katy head to Macau to find her. But Xu resents Shang-Chi for abandoning her and has trained herself into the martial super-fighter her father would never allow her to become.

Shang-Chi and the Legend of the Two Rings is a curiously mixed bag. First the good: it’s a huge amount of fun. There are some cracking gags and some of the fight scenes have to be seen to be believed. In particular, an early fight scene on a San Francisco bus is an absolute belter. A whirligig of movement, flicks, kicks and punches in, on and around a bendy-bus, using bars, doors, windows and bells to imaginative effect. Hugely exciting, its something the rest of the film struggles to live up to – although a vertigo inducing scaffolding bound fight in Macau comes close.

The film is also built around engaging characters. Shang-Chi is charmingly played by Simu Liu as a very reluctant hero, an extremely polite, decent guy with a wistful wish to just mess around and not grow up, but determined to do the right thing when pushed. He’s very well matched with Awkwafina, extremely funny but also heartfelt as his best friend, great with the one-liners but handling the serious content very well. The film dances rather neatly along a line of not-quite-deciding if these old friends are a potential romantic couple as well, which actually makes for a rather sweet dynamic.

Unfortunately, where the film is a bit weaker is in making it clear exactly what the character arc, or goal, for Shang-Chi is. While this is partly the intent of the film – he has, after all, effectively been drifting through life for a decade – the lack of a really compelling story line or a powerful sense of motivation from Shang-Chi slightly weakens the story. We never really quite get a grip on him as a character, other than knowing he’s a decent guy, out of his depth.

That’s partly because the film invests so much depth into his father, played superbly by Tony Leung making his English-language debut. Wenwu is conflicted, traumatised and motivated by a desire to bring his family together, unable to see that children’s upbringing has made them confused and vulnerable rather than strong. In every scene, I always understand what Wenwu wants and where he is going in a way I don’t with the hero – and this somehow feels the wrong-way round. Effectively, Wenwu is the protagonist of the movie, and Shang-Chi never quite steps up to take his place.

Instead, Shang-Chi has a fairly conventional “Daddy’s issues” plot line – can he overcome his fear and respect for his wicked father? I’d point out that his sister – well played by Meng’er Zhang – has exactly the same issue, but the film isn’t interested in her solving them, focusing instead on the father and son confrontation. Essentially, thematically, not a lot in Shang-Chi and the Legend of the Ten Rings is actually that new – it’s a fairly familiar coming-of-age Superhero origins story, with the loss of a parent and a clash with the surviving parent thrown into the mix.

Not that there is anything too wrong with that when it’s done well. Most of the film is done well, with jokes and fine set-pieces. Ben Kingsley enjoys himself hugely reprising his deluded actor from Iron Man 3. The film quite effectively builds in a Chinese aesthetic – large chunks of the dialogue is in Mandarin – and riffs charmingly off Chinese myths and legends and kung-fu inspirations. The Ten Rings themselves are barely explained at all, but an end-of-credits scene shows this was intentional.

Its weakest section is of course when we get to the final confrontation. This is a CGI over-loaded smack-down between two huge special effects – and carries significantly less impact than the emotional clash between father and son the film has been building towards. A braver film would have left it there without the CGI monsters – but the Marvel films have always been convinced that spectacle is what people want, and I guess they’ve not got much wrong so far.

Shang-Chi and the Legend of the Ten Rings introduces a charming hero, but by the end of the film I still wasn’t quite sure who he was or what he wanted from life. Maybe that doesn’t matter since sequels are inevitable, but there is something amiss when the villain makes such a dominant impression that he takes over the film, as Tony Leung does here. Fun, but a little too long and a little lacking in focus.