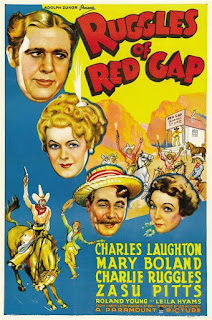 Ruggles (Charles Laughton) is the perfect gentleman’s gentleman. So how will he react when his gentleman, the Earl of Burnstead (Roland Young), loses him at cards to nouve riche American Westerner Egbert Floud (Charles Ruggles) and his social-climbing wife Effie (Mary Boland)? Wodehousian antics meet societal culture-clashes, in Leo McCarey’s witty and rather sweet comedy from Charles Laughton’s annus mirabilis (Ruggles, Bligh and Javert all in the same year!) that’s a celebration of American egalitarianism and the well-hidden warm cordiality of the polite British.

Directed with a fine sense of comedic timing by Leo McCarey, Ruggles of Red Gap is refreshingly heart-warming and a celebration of the rewards of decency. For all his initial reserve – and Jeevesian distaste for his new employer’s brashness and love of chequered suits – Ruggles emerges as a decent man, liberated by the classless openness of America. In fact, the idea of all men being equal opens Ruggles eyes for the first time to the idea of making his own decisions (after all he doesn’t question being told he will be moving from Paris to Washington State) and being seen as something other than just an extension of his employer.

Ruggles makes this point with some excellently delivered set-pieces. Most of these revolve around the enjoyable cultural clash between Ruggles and his new employer, the relaxed Egbert, who can’t imagine not calling Ruggles by a host of invented names (from “Bill” to “The Colonel” – the latter causing no end of trouble later) or inviting this staid servant to sit down and have a beer. Egbert’s obliviousness to the careful social rules that Ruggles has lived his entire life by works, because there is not a jot of meanness or correction to it. Egbert genuinely doesn’t understand the fine points of class difference and sees no reason not to treat Ruggles like a friend rather than a servant.

It makes for some terrific moments of comic business. Ruggles and Egbert conduct a running battle where Egbert’s natural politeness and Ruggles’ duteous deference leads to them constantly insisting the other walks first through doorways. Their first day together sees Egbert and a friend taking Ruggles to a Parisian bar and getting him roundly pissed (probably for the first time in his life). Later Egbert’s insistence on introducing him when they arrive in Red Gap as his friend “the Colonel”, combined with Ruggles patrician manners leads to him being mistaken as a genuine aristocrat by the snobbier element of Red Gap society.

Regular Americans may be overly boisterous – you can’t miss the increasingly irritated reactions by Parisians at Egbert’s reunion on the streets of Paris with an old friend, which escalates from embraces, to loud whoops to riding each other like horses – but generally they mean well (good natured fun is poked at the American’s hopelessness with foreign languages – “je voodrais ham un eggs”). In Red Gap, the patrons of a saloon greet Ruggles as one of their own. In turn Ruggles – and even the Earl of Burnstead – are charming and respond far more warmly to their decency than the snobbery of the hoi polli.

If there are unsympathetic characters in the film, it’s the snobs of the American elite, desperate to grab a bit of that old world glamour. Egbert’s snobby brother-in-law Charles sticks out as dyed-in-the-wool snob, concerned mostly with position and being seen with the right people. Effie (hilariously played by Mary Boland) is interested in Ruggles largely as a status symbol, and spends her entire time crafting Egbert into her idea of a gentleman. By contrasts the actual upper status chap, the Earl (delightfully under played with a hilarious uber-poshness by Roland Young) is relatively decent, humble and far prefers the fun-loving social crowd of Red Gap the stuffed shirts.

The film was a very personal one for Laughton, deep into his decision to take up American citizenship. Ruggles’ (and Laughton’s) love for American society is captured in the scene where he recites the Gettysburg Address to the rapt patrons of the saloon (none of whom could remember a single word of it when asked beforehand). In previews, the audience sniggered at Laughton’s emotional rendition (he couldn’t get through it without weeping) – so McCarey re-cut so we only see Laughton from behind and instead focuses on the faces of his audience: suddenly the scene carries real emotional force.

Laughton’s performance is an odd mix. Some moments – such as the Gettysburg address – he nails. His interplay with the other actors is highly effective, but many of his reaction shots often feel overplayed. He over eggs the pudding with the comic eyebrows and, like the scenes when he plays drunk, he sometimes seems to be trying too hard to be funny. But his ability to offer several different versions of shock and surprise is pretty faultless and he captures beautifully Ruggles growing sense of independence and delight at there being more opportunities in life than he ever imagined.

The rest of the cast bounce off each other with all the ease of a relaxed repertory company. Charles Ruggles (who knew Ruggles was such a common name!) is brilliant as Egbert, loud, brash but overwhelmingly kind and decent. His comic timing is exquisite and his chemistry with Mary Boland (one patient the other long suffering) is a constant delight. The comic playing of the cast, with assured – if at times visually disjointed – direction by Leo McCarey helps craft this into a delightfully heart-warming comedy of manners with just the right touch of slap-stick. At the end of which you’ll be as willing to jack it all in and set up a grill in Red Gap as Ruggles is.