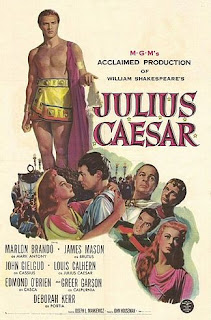 Hollywood has always been in awe of Shakespeare. For large chunks of Hollywood’s Golden Age, it was felt the Bard’s mighty words could only be performed in a certain way by certain actors and that it somehow besmirched the Bard to put him on celluloid. It’s partly why there are few truly radical productions of Shakespeare on screen. By 1953 Orson Welles had directed inventive, challenging productions of Macbeth and Othello that reworked Shakespeare for cinematic effect, but these had been met by horror by some critics (‘how dare he change things!’). Julius Caesar fit the mould in many ways for how Hollywood felt Shakespeare should be done – traditionally, respectfully and by a cast of trained theatre actors. Then they threw in a curve ball by casting Brando as Mark Antony.

It’s hard now to really understand the hesitancy (and outright snobbery) from many about the very idea of Brando doing Shakespeare. This was the mumbling Stanislavsky-trained star of Streetcar, the earthy, T-shirt wearing slab of muscle that yelled “Stella!” – who on Earth did he think he was? Shakespeare is for plummy accents, focused on poetry. Brando took a huge risk taking this role on. But, today, his performance feels fresh, vivid and in many places strikingly modern.

Brando bought a more relaxed, natural style – and, yes he also affected a slightly plummy Brit accent – and bought a emotional realism to the most exhibitionist of Shakespeare’s great roles. (Let’s not forget, most of Antony’s part is a massive public speech). Brando creates an Antony who is passionate, loyal, committed – but also cunning, manipulative and very aware of the effect he is attempting to generate in that famous speech. He delivers the speech with aplomb, but concentrated as much on the emotion of what he was saying as the poetry of how he said it. It makes for an excellent marriage between two different styles of theatre, and Brando’s powerhouse delivery (Oscar nominated) carries real energy and dynamism.

It sits within a very traditional production, carefully shepparded to the screen by Joseph L Mankiewicz. Mankiewicz was a two-time Oscar winner for Best Director – but his reputation was largely formed on his mastery with dialogue and actors, rather than any visual sensibility. Julius Caesar is intelligently and faithfully bought to the screen – albeit with little cinematic flourish – shot with a moody black-and-white (designed to ape newsreal footage and add further dramatic urgency to the action) on sets that were leftover at the studio from Quo Vadis. (Some of the busts are hilariously out of place – pretty sure Brutus has a bust of the Emperor Hadrian in his home, quite something seeing as he died 160 years before Hadrian was born.)

Mankiewicz by and large lets the play speak for itself.  What Shakespeare wrote, he largely says, and there is little in the way of message in a play that has been reversioned to almost any oppressive regime you can imagine. A few flourishes diverge from the text. He radically simplifies Acts 4 and 5 of the play (particularly the Battle of Philippi and the consecutive suicides of Brutus and Cassius), reducing these down to little more than half an hour. Wisely he focuses on the more dramatic Acts 1-3. The scheming is tense and moody, the assassination swift and brutal. The crowd scenes in Rome bustle with an immediacy and vibrancy – the camera often sits among the plebians during the speeches, encouraging us to share their feelings and reactions to the speeches. Antony is made a calculating and cunning figure – consciously waiting for certain reactions: he even, in one directorial flourish, enters bearing Caesar’s corpse during Brutus oration.

Mankiewicz’s main strength is in working with actors. Although Brando claimed the plaudits, the play is actually centred around Brutus, the intellectual of good intentions drawn into a conspiracy for the best intentions who finds principles and coups make for impossible bedfellows. The film’s finest performance is from the simply superb Mason, who was born to play tortured decent patricians like this and creates a Brutus stuffed with doubt, pride, arrogance, uncertainty and a little touch of fear. His patrician voice is perfect for this “most honourable of all the Romans”, and he sets about murder as the deeply unpleasant task it is, guided by his assumption that he-knows-best. The little moments are brilliantly done: from his petrified nerves at the assassination to his pious sermons on morality to Cassius to his tenderness and care for his wife and servants. It’s a wonderful performance.

To complement him, Mankiewicz recruited one of the greatest Shakespearean actors living as Cassius. Gielgud hadn’t done a film for over ten years (he always felt the cinema to be a minor art), and Julius Caesar was the only opportunity he had to capture one of his great Shakespearean performances on film until Prospero’s Books nearly 40 years later. It’s fascinating to watch a film where the old school (in Gielgud) and new school of acting (in Brando), both bring their own approaches to Shakespeare. This is Gielgud’s finest Shakespearean performance on camera – he must surely have learned more about acting on camera from Mason and Brando – the first time his style moved away from ‘singing the verse’ towards something more emotional, his Cassius a bitter, manipulative man who starts the film holding all the cards and ends up with none of them.

Watching these three powerhouse performers work is a treat – and also to see their styles merging and playing off each other. Mason is the perfect fusion of the realism of Brando and theatricality of Gielgud. Brando learned huge amounts from Gielgud, frequently consulting him on delivery. Gielgud surely took as much from Brando on adding greater emotion and realism into his screen performances, shirking the declamatory style that often makes him grand but unconnectable. The other actors around them offer versions of these styles: O’Brien stands out best as a shrewd and cunning Casca, Calhern tries a little too hard to be grand as Caesar, Kerr and Garson are a bit too theatrical in thankless parts as “the wives”.

Julius Caesar as a whole though is a lean, pacey and intelligent staging of the play, directed unobtrusively but professionally, very well acted by the cast. While Mankiewicz does nothing radical here – look at Orson Welles Othello and there you’ll see how the language of cinema can add a whole new perspective to Shakespeare, in a way this film never does. But while not radical, it focuses on story and character really well. The set-piece moments – the speeches, the murder, the plotting – are staged with urgency, energy and drama. Mainstream Hollywood still wasn’t ready for radical reworking of Shakespeare (this got lots of Oscar noms, Welles Othello was a flop), still seeing him as someone best cast in marble – but with Julius Caesar Hollywood took baby steps towards suggesting there could be a different future.