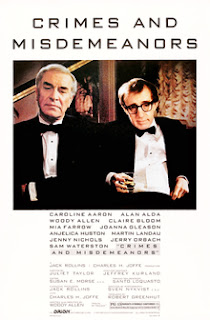 Successful ophthalmologist Judah Rosenthal (Martin Landau) has it all: respect, fortune, a loving family…and a mistress. That mistress, Dolores (Anjelica Huston), won’t play ball and disappear but actually wants Judah to deliver on his half promises of leaving his wife. Should Judah confess all, as his rabbi friend Ben (Sam Waterston) suggests? Or should he follow the advice of his gangster brother Jack (Jerry Orbach) and remove Dolores permanently? Meanwhile, documentary film-maker Cliff (Woody Allen) has been hired by his brother-in-law, pompously successful TV producer Lester (Alan Alda), to shoot a film celebrating Lester’s life. During the shooting, Cliff can barely hide his irritation – or his growing attraction to Halley (Mia Farrow), the associate producer both he and Lester are romancing. Who will she end up with?

Dostoyevsky – could you live with a murder? – gets the Woody Allen treatment in one of Allen’s most highly respected, but troubling films. To be honest, I didn’t much care for Crimes and Misdemeanors. I have moral qualms about it – and, I will hasten to add, these qualms have nothing to do with the lack of punishment for Judah. Crimes and Misdemeanors hides its blatant cynicism and loathing for people, underneath some fine acting and good jokes. But its possibly one of Allen’s most unlikeable works, where his sympathies seem hideously astray.

It wants to be an exploration of the guilt that follows a crime. But to be honest, aside from some expert furrowing of brow and distressed line deliveries from Landau, I’m not sure Woody has much to say about guilt. Furthermore, I think he is inviting us to sympathise with Judah not because he feels bad (and even then, so what?), but for various extenuating circumstances. Namely, he’s a good man (he has all but funded a new hospital wing by himself) with a loving family and is a dedicated doctor. Furthermore, his mistress is presented almost exclusively as a demanding and difficult floozy (Anjelica Huston in an unflattering part – although at least she gets more to do than Claire Bloom in the thankless part of Judah’s wife, an almost non-existent role).

Frankly, the film suggests Judah’s motives are more complex than just removing a self-caused problem and since he feels shock (sorrow for Dolores or the crime seems noticeable absent, and it feels like Allen mistakes the one for the other) and is a nice guy, we should think again about our knee-jerk reactions of right and wrong. Problem is, Judah is not a nice guy – he’s shallow, self-pitying and self-justifying – and watching a character with, it turns out, no real morals go through a moral quandary doesn’t make for engaging viewing.

Judah’s moral reaction to the murder is insubstantial. Essentially guilt makes him wonder where there is in fact a God after all – before deciding that, on balance, the probability is that the universe will not punish him. Other than that, I’m not sure Allen has much more to add to the discussions of right and wrong. Dostoyevsky made hundreds of pages of conscious and guilt shattering a man’s equilibrium. Allen can’t manage more than about ten minutes of screen time, let alone 90 minutes.

Perhaps that’s why Crimes and Misdemeanors is padded out with a second, almost as long, unconnected secondary plot. It’s a one-sided rivalry between Allen’s film-maker and Alda’s pompous producer, with Mia Farrow as an artistic waif who serves as the prize for this unspoken competition. (This is perhaps one of the worst Allen films for female characters: we have two cold, personality-free wives for the main characters, a shrill mistress, a bland artistic waif and Woody’s character has a sister who is tied to a bed and defecated on. How did the same guy write Hannah and Her Sisters?)

Again, Allen’s sympathies lie with the idealistic, uncompromising Cliff, even more so because his interest in making films people don’t want to see makes him, in Allen’s eyes, noble. Compare and contrast with the film’s loathing for Lester – hilariously played by Alan Alda as a neat self-parody. Lester is everything Cliff isn’t, but secretly wants to be (though I’m not sure Allen realises this): successful, well-regarded, admired, rich and gets all the girls. No wonder the film hates him – even though, to be honest, he doesn’t seem the bad. After all, the sort of drive and ambition that Lester has is exactly what makes a man successful.

It wouldn’t matter so much if Cliff wasn’t remarkably similar to him, but considerably less charming. Just like Lester, Cliff is a self-important bore, cuddling his lack of success as proof of his genuineness. Cliff has no problem with effectively creepily stalking Halley (despite being married – fine though as Allen thinks she’s a bitch). Cliff’s passive aggressive assertions that Halley deserves someone like him rather than someone like Lester aren’t romantic, they’re creepy. (Needless to say, Halley ends up with Lester, to Cliff’s shock, horror and disappointment – while his wife plans to leave him).

Now I get it, there are people reading this who will think “well yes you just don’t like it because you want a simple ending where the baddies are punished – well life isn’t like that”. That’s not the case: I’m fine with films where murderers escape scot-free: but I generally want the film to know they are bad people. Crimes and Misdemeanors doesn’t. And it doesn’t really have anything of interest to say. It’s one of Allen’s films where his cynicism about humanity is exposed too heavily. You long for a bit more critical insight into Cliff, or for a more acute exposing of Judah’s self-interested excuses. You get neither, instead Allen ending on the note that the universe is dark and indifferent and only love can change things. There’s lots of the first two and precious little of the third here.