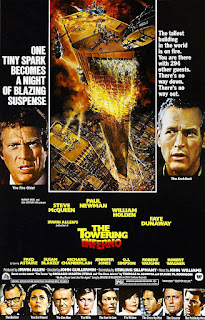 Architect Doug Roberts (Paul Newman) flies into San Francisco for the grand opening of The Glass Tower, the newly constructed tallest building in the world which he has designed for developer James Duncan (William Holden). A celebration with the rich and famous is planned – too bad Duncan’s rogueish son-in-law Roger Simmons (Richard Chamberlain, smarming like his life depends on it) has saved a few dollars by stuffing the building with sub-standard wiring. Surely the world’s largest building can’t catch fire? You bet it could – and only heroic Fire Chief Michael O’Halloran (Steve McQueen) has the expertise to put it out.

The Towering Inferno was the peak of the “all-star disaster” genre. It was bought to the screen by Producer (and “Master of Disaster”) Irwin Allen, and pretty much ticks all the boxes you expect from the genre. A star at every turn! A huge running time! Constant denials that anything could go wrong (of the “This building can’t burn down!” variety)! Kids in peril! Death-defying stunts! A brave pet! An elder statesman of Hollywood risking life and limb! A scoundrel we can boo! A tear-jerking death! The Towering Inferno pretty much has it all, and it plays every single beat with the sort of po-faced seriousness that was already starting to look a bit silly by 1974.

Films like this work because audiences – as we’ve seen time and time again – never lose their taste for watching things get trashed. In the 1970s every studio wanted its own mega-budget disaster film. The Towering Inferno’s real uniqueness is the story behind its making – two studios had competing “Skyscraper on Fire!” projects but, instead of competing, pooled their resources to make one mega hit. So, Warner Brothers The Tower and 20th Century Fox’s The Glass Inferno became this.

Irwin Allen was handed the keys – because no-one did it better – and each studio contributed a star. McQueen and Newman spent almost as much time negotiating equal terms as acting in the movie. Both were paid 10% of the gross and agreed they would have exactly the same number of lines (many of Newman’s final scenes sees him perform stunts wordlessly, as he burned through his allotted lines during the 40 minutes he spends on screen before McQueen turns up). The billing was negotiated carefully: their names would appear on screen together with Newman slightly higher, but McQueen’s name to the left (both could therefore claim they were “first billed”).

Their interest in the film pretty much ended there. Newman was famously disparaging of what he called “a piece of shit” and the only time he did something purely for the money. He coasts through on those blue eyes and twinkly grin. Eager that his character be absolved of responsibility (he has designed a tower that will claim 200 lives!) Newman’s architect is continuously absolved of any responsibility by the rest of the cast and leads on saving lives. McQueen grabbed the better role as the all-action fire-chief, riding in after 45 minutes (thus wisely missing out the tedious build-up of the soapy plot lines), takes charge and does nothing but manly action, but he also looks like someone going through the motions.

But then they know the things that will be remembered are the set-pieces. As flames stretch up the building, our star names dodging explosions, climbing up shattered staircases, dodging collapsing ceilings and taking on vertigo-inducing heights, it’s hard not to be excited. As in all disaster films, the disaster takes a strong moral stance. Of all the characters who die only one ‘doesn’t deserve it’. Aside from that, the actors playing philanderers, swindlers and bastards inevitably bite the dust, while the upstanding and noble pretty much see their way to the end.

The disaster sequences are impressive – and the fire-effects are really well done. Allen directed the ‘action sequences’ – aka the only bits of the film you really remember – while Guillermin handled ‘the acting’ (the dull, soapy, badly written bits you forget). The cardboard characters (no wonder they catch fire so easily!) could have had their personalities scribbled on the back of a stamp, and are pretty much dependent on the charms of the actors playing them. Fred Astaire’s gentle conman (the sweetest grifter you’ll ever meet) is a ludicrous character, but works because of Astaire’s twinkle-toed charm (Astaire grabbed a wave of affectionate awards nominations). Jennifer Jones plays off him rather well in the film’s ‘heroic elder statesman of Hollywood’ role, as a woman who puts herself at huge risk to save two kids (and their deaf mum) from immolation.

But pretty much all the character-based stuff in Towering Inferno is ludicrously silly, with some strikingly bored actors (Faye Dunaway looks like she wants to be anywhere else) but it hardly matters as we are there to watch the world burn. Which it does to spectacular effect, and the reassuringly, camp predictability of the film’s events is endearing – and raises a few good-natured laughs (you have to laugh at something like this, even though it wants to take itself so seriously). The Towering Inferno was the largest of all the disaster flicks of the 1970s. Allen shoehorns in a few points about fire safety in tall buildings for the ‘serious bits’, but his heart is in consigning most of the second tier of his all-star cast to dramatic, firey deaths. Overlong, very silly but rather sweet.