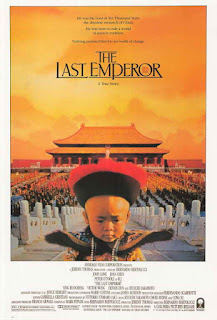 In 1908 a toddler, Puyi, became the last Emperor of China – but in 1912, revolution made China  a Republic and he was reduced to only being Emperor of The Forbidden City, a place he has never left since 1908 and will not leave until 1924 when he is expelled from the city. As an adult Puyi (John Lone) remains a puppet, becoming Emperor the Japanese puppet state of Manchukuo, where he is again largely confined to his palace, his Empress Wanrong (Joan Chen) becoming an opium addict. After World War II, Puyi is imprisoned for ten years by the Maoist government, being re-educated into becoming an ordinary citizen of China.

Bertolucci’s film explores the life of this slight historical figure. I say slight, as Puyi is always and forever a puppet, buffeted by history. He owes whatever prominence he has to a quirk of fate, but never truly learns who he is or his purpose, only slowly realising his power is an illusion. It’s the main flaw of The Last Emperor – otherwise a sumptuous epic – that it such a grand film about such a shallow person. Puyi is not particularly interesting or fascinating, and the film largely fails to turn him into an intriguing enigma. The Last Emperor – which hoovered up 9 Oscars, including Best Picture – is brilliantly made, frequently fascinating and breath-taking, but also strangely lifeless.

Bertolucci and producer Jeremy Thomas spent years raising the money and negotiating with the Chinese government to have unrestricted access to the Forbidden City. It’s that which really makes the film effective. The first half of the film is set exclusively in The Forbidden City (flash forwards see the adult Puyi in post-war captivity, being questioned by his guards). The scale is stunning and it’s shot by Vittoro Storaro with a breath-taking opulence and fascinating eye for Chinese culture. Storaro also carefully distinguishes with colours each section of Puyi’s life, from the reds and golds of his childhood to the washed-out greens of his adulthood. The impact of this on screen remains impressive today – and Chinese co-operation produced almost 19,000 extras to populate it.

These early sections are the film’s strongest. Bertolucci was fascinated with complex coming-of-age tales, balanced with leftish politics. The film is fascinated with the power/non-power of this child. He leads a strange dance of being a puppet and figurehead, who can still order his servants to obey his every whim. It’s an upbringing that would pervert any child – and Bertolucci shows it creates a man who lacking any sense of emotional awareness and maturity; not cruel as such, but unable to fully understand what it is to be human because he has never known anyone who is an equal.

His ‘power’ expresses itself in petulance, selfishness and sometimes acts of cruelty – and he becomes a man drifting through life, aware that he should feel more of a connection with people, but lacking the emotional self-awareness forming connections with people requires. It’s not helped by Puyi’s weak personality. Growing up effectively imprisoned – but all-powerful – in a single city means he constantly gravitates towards similar situations, be that a puppet ruler signing whatever he is told to in Manchukuo or expecting his servants to continue to dress him in prison (how is prison different really from the rest of his life?)

Bertolucci films this with an acute emotional understanding that counterpoints the wonderfully luscious scale of the film. All those expansive costumes, gorgeous filming and awe-inspiring location shooting helps us to understand the smallness and meekness of Puyi and his stunted emotional world. Only the arrival of an English tutor – played with an expressive playfulness by Peter O’Toole – shakes up this world and offers Puyi the chance of some sort of personality development. Sadly, his influence is all too short – and Puyi seems to take mostly the wrong lessons from it, of English exceptionalism and 'doing your duty' that convince him he's got a duty to try and maintain his position.

It’s after Puyi leaves that the film weakens. Perhaps knowing the Forbidden City sequences were the finest – and most gorgeous – parts of the film, most of Puyi’s life after is shunted into the final hour. This makes for rushed scenes and a number of “tell not show” moments, where characters bluntly (and swiftly) fill in various political and social events. Puyi’s reasons for becoming Emperor of Manchukuo are only briefly sketched, but not as briefly of the characters of his new Japanese masters (Ryuichi Sakamoto – also the Oscar-winning composer – and Maggie Han, a seductive collaborator) as scenes race by as the film rushes towards its conclusion.

Perhaps also not surprisingly for an old Marxist (and with that need to secure the Chinese co-operation) the Maoist government gets a fairly easy ride, with the main representative of Maoist authority being a genial, supportive governor and the re-education camp being treated as a genuine programme of self-improvement rather than indoctrination. But then you can also say it’s a sign of the film’s relative even-handedness – and it does touch on the Cultural Revolution (and its random denunciations) late, albeit with a gentle eye.

It’s a shame the second half of the film doesn’t hold up as well as the first half (a longer Director’s Cut fixes some of these problems), but the first half is intriguing, dynamically made and full of emotional insight. John Lone does a fine job in a rather thanklessly bland role as Puyi and Joan Chen moves from austere to depressed as his wife, but to be honest few other members of the cast make an impact (it’s one of the few modern Best Picture winners with no acting nominations).

Bertolucci’s film is superbly made, beautiful to look at, intriguing – and you can see its influence on Farewell My Concubine among others (Chen Kaige has a small role in the film, as does Zhang Yimou) – but it suffers slightly from being about such a non-person. You wonder how it might have worked better if it had kept a tighter focus – or skimmed over more of Puyi’s life rather than hurriedly trying to cover the whole lot – but what we end up with mixes the rushed with the extraordinary.