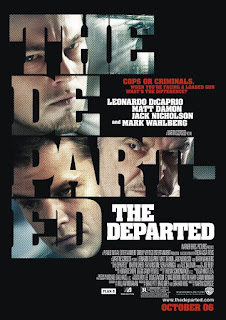 It’s one of those historical oddities that Scorsese finally won his Oscar for his lightest (comparatively speaking) most out-right entertaining film. I’ll confess I’ve never been a huge fan of The Departed. It won Best Picture in a year without a clear front runner, with the Academy feeling an overwhelming sense that Scorsese was ‘due a win’. The Departed is certainly entertaining, but as a great big, violent cartoon which feels like a different universe from the director’s real gangster masterpieces, such as Goodfellas, Mean Streets and Casino. The Departed also can’t hold a candle to Raging Bull, Taxi Driver and The Aviator (I know that last one is controversial). Still it may be just a bit of fun, but at least it is fun.

Boston is a city where the Irish community is split, between cops and robbers. Crime lord Frank Costello (Jack Nicholson) gets a man on the inside by pushing his protégé Colin Sullivan (Matt Damon) to train as a police officer so he can get tips from the inside. Simultaneously, Captain Queenan (Martin Sheen) recruits officer trainee Billy Costigan (Leonardo DiCaprio), an honest young man with a dodgy family, to go under cover in Costello’s gang. Both moles feed information on their ‘side’ to the other – but the stakes heighten as they both become aware of the others existence and race to unmask the other’s identity.

Based on a Hong Kong action film, Infernal Affairs (which has the same plot, but tells the story in about half the time). The Departed takes the basic template and ratchets almost everything up to an even more frenzied pitch. Scorsese throws in fast-cutting visual flair, makes effective use of montage and lays The Rolling Stones over the soundtrack (he really does love Gimme Shelter doesn’t he?). It’s hard to tell, watching The Departed, how much Scorsese’s tongue was in his cheek. This could very easily be a parody piss-take of Casino, with its bright-lights, extreme violence, effing and jeffing and toxic masculinity.

What is clear is that The Departed has all the logic of a playground game. Nothing ever feels particularly real, all emotions and personalities are dialled up to eleven. Big name actors have fun with big, chewable dialogue fully of sweary one-liners. There is barely any sense of a wider world, The Departed really being a chamber piece involving a few key characters, played out in a graphic novel style. In real life both Costigan and Sullivan would have been uncovered in seconds (it makes Line of Duty look like a fly-on-the-wall documentary). If it has links to any Scorsese film, it’s probably Cape Fear, which was a similar heightened pastiche (of Hitchcock). Don’t get me wrong, there is a lot of fun in watching Scorsese essentially take himself off, and it’s nice to see him having fun, but the film’s constant resorting to foul-mouthed, cartoonish action means depths are missed. 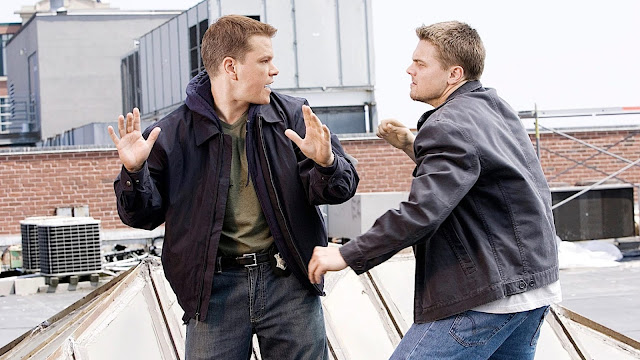 For starters, the film touches on but never really dives into the complex divided loyalties Costigan and Sullivan feel for their sides. After years (at least I think its years, there is very little sense of timeline in the film) pretending to serve one master while actually serving another, you’d expect an exploration of loyalty being increasingly torn between these two masters. It’s not a sense that comes across in the film. Instead, both of them feel fear of their false master and resentment to the true master. Both want to retire – seemingly to the same (lawful) side. The film spends time on the psychological impact of the constant stress of living a lie – but its analysis of this is skin-deep, trauma exhibiting as a bubbling, unpredictable temper (especially with DiCaprio’s Costigan) rather than really giving us an understanding of the psychological trauma. All the final shots in the world of a rat crawling across a railing in front of the court house, doesn’t translate into insight.

The film also misses the mark in exploring the dangerous masculinity of this world. The intense male attitudes here – with the macho posturing and the constant use of sexual and homophobic slurs – are obviously part and parcel of this world. But you feel a smarter film would have unpacked this more, rather than using it for punchlines and chuckles. There’s only really one woman here – a female psychiatrist who (obviously) becomes involved with both men – and you feel more could have been made of how the destructive bloodshed of this film is at least partly powered by overgrown schoolboys on both sides burning the world down to prove their manliness.

But this film is designed as an entertainment, not the sort of insightful character study Scorsese has delivered in the past. And with its primary colour pallet and shots – like a character falling from a building, and low-angle Dutch angle shots of characters checking phones – that seem inspired by graphic novels, it’s clear that we are not meant to take things too seriously here.

That carries across to the performances, many of which are Grand Guignal in their excess. None more so than Jack Nicholson in a performance of such flamboyant “Jack-ness” that it will either delight you or make you wonder whether Scorsese gave him any limits at all. The cast is roughly split between the OTT and the method. Mark Wahlberg follows Nicholson’s lead as a foul-mouthed, permanently angry cop, with rigid morals (he was Oscar-nominated and gets most of the film’s funniest lines) while Baldwin showboats amusingly on the chewy dialogue. At the other end, Sheen brings a fatherly warmth to Queenan while Winstone mumbles a lot as Costello’s number two. 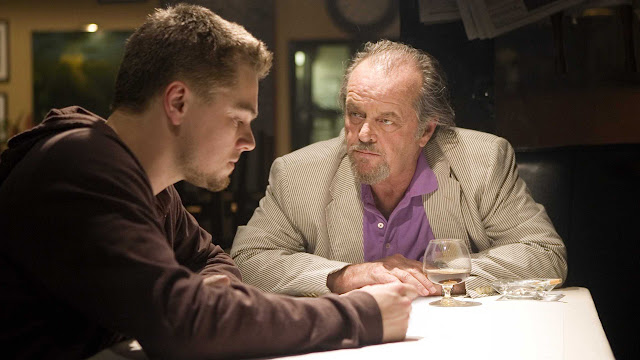 In the leads, DiCaprio brings an edgy, firecracker intensity to Costigan, a man who seems constantly on the edge of a nervous breakdown. Damon, by contrast, underplays rather effectively as the seemingly straight-laced Sullivan, letting the Boston accent roll around his tongue and riffing effectively off his “boy next door” looks. Vera Farmiga does decent work as the woman caught in the middle – even if she’s not 1% convincing as a trained trauma psychologist.

That doesn’t matter though in the heightened, cartoony posturing, blazing gun battles and operatic shouting that makes up the crazy world of The Departed. Scorsese lifting the Oscar for this is rather like David Hockney winning the Turner Prize for a doodle. I enjoyed it a lot more this time around, but it’s still a big, crude, graphic novel, something that looks and sounds clever., but is only a B-movie imitation of Scorsese’s finest work. The Departed is frothy but misses the mark when it aims for true thematic or character exploration.