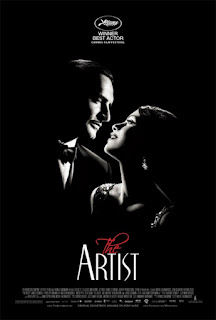 In 1920s Hollywood George Valentin (Jean Dujardin) is King of the Silver Screen. Why would he want anything to change? Surely these ‘Talkies’ are just a passing fad, right? Ooops. Before he knows what has happened, Valentin has gone from top of the world to the very bottom, left behind (like so many real-life silent stars) by change. Meanwhile, Peppy Miller (Bérénice Bejo), the young extra from his glory days whom Valentin briefly mentored, become a star of the Talkies. But Peppy still loves Valentin – and maybe he loves her – even while Hollywood pulls them apart.

Plot-wise, The Artist is pretty conventional. What really makes it stand out is that it’s a silent film about silent film. Perhaps that’s why the whole world went gaga for it (gifting it five Oscars, including wins for Hazanavicius, Dujardin and the Big One) – it was a genuine burst of nostalgia-tinged novelty. Everything old is eventually new again: I remember the novelty myself – sitting in a cinema and suddenly, after the music stops, hearing nothing but silence. Match that with the undeniable charm and energy the story is told with and, boom, you had a hit.

Does The Artist survive repeated viewings? Just about – though it looks increasingly like a slight film, that raises warm feelings but makes little lasting impact (I was surprised how much of it I had forgotten). Hazanvicius’ study of silent cinema has clearly been thorough, and this is undeniably a wonderful love letter to Hollywood’s history. Every technical detail is carefully reproduced, and the pastiche Fairbanks-style adventure stories Valentin stars in is spot on. The actors fully embrace the slightly exaggerated mannerisms of silent acting, telegraphing emotions with urgency.

Hazanvicius uses sound, when it comes, brilliantly. The opening of the film is bathed in music as we watch the premiere of one of Valentin’s films – only for all the sound to drop out the second the film-within-a-film ends. (We even see a “Silence behind the screen” sign before it does). We only hear everyday sounds twice – once in a hilariously haunting dream of Valentin’s where objects make noise but he cannot – and at the end of the film as Valentin finally finds a place in Talking Hollywood. Other than that, it’s scores, speaking cards (some of them witty, like Valentin’s wife’s question “Why do you refuse to talk?”) and all the style of silent cinema.

It’s a sweet and gentle film. There is no trace of the ruthless business Hollywood is, and not a trace of the darkness that touched many of this era. There is never any prospect of Valentin turning into, say, Sunset Boulevard’s Norma Desmond or any of the other washed-up waxworks in her house of broken dreams. Valentin loses everything, but remains a generous and decent guy, firing the loyal chauffer he hasn’t paid in a year (and giving him his car for free!) because otherwise he’ll never leave him. And of course, his dog loves him, so he must be a great guy. (The dog by the way was the break-out star, this charming, brave canine even getting a campaign for best supporting actor).

The film centres a love story between Valentin and Peppy. The two of them have an instant connection – but Valentin is the star, with Peppy the ingenue. This bond can survive nearly everything, even while Valentin resents her success. Hazanavicius manages to make this very sweet, even though Peppy is sometimes tediously saintly in her devotion. Valentin may have mixed feelings about his protégé – but in a housefire, the only thing he saves is footage of the two of them messing around in outtakes from one of his old films.

The film seems unbothered as well by the fact that Valentin is married. The wife (a thankless role for Penelope Ann Miller) doesn’t get a name, let alone any sense of a personality other than (it seems) being some sort of shrew.

You could also see Peppy, if you wanted to be uncharitable, as a bit of a stalker. She buys up (by proxy) all of Valentin’s goods when he goes broke, practically abducts him from the hospital after he is caught in a fire, hires his staff. Tip your head to one side and you can see her boiling a few bunnies. The Artist though sees her as more of a “Guardian Angel” (as per the title of one of Peppy’s movies) – and you can argue that there is something old-fashioned (not always in a good way) about a film where the female lead defines her success only by how it can help the man she loves.

The tinge of creepy to the Valentin-Peppy relationship isn’t helped by using a huge chunk of the Bernard Herrmann Vertigo score to underscore the film’s conclusion, not to mention the left-field melodrama of Peppy racing across town to prevent Valentin from committing suicide (motivated it seems by realising Peppy is his Guardian Angel). It’s an odd mis-step – and the sequence not only feels radically different from the rest of the film, it also seems to heavy for such a light confection.

But, negatives aside, it’s a decent little film. Jean Dujardin is the epitome of charm and old-school Hollywood wit as Valentin – it’s a master-class in physicality and he oozes matinee idol cool, and a certain boyishness. Bejo is very good as the well-meaning, kindly Peppy. The film is a puff of air, and once you get over the novelty, you’ll be amazed how little there is to it. But it’s told with such energy, charm and nostalgic wit (and ends with a lovely dance routine) as well as affectionate nods to old-school Hollywood, you won’t mind too much, even if you’re surprised it won as many awards as it did.