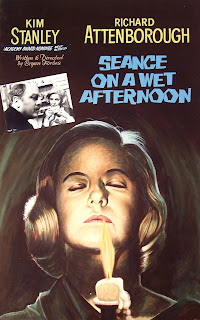 Myra (Kim Stanley) and Billy (Richard Attenborough) Savage are a middle-aged couple held together by shared grief for a lost child. Myra works as a medium with the spirit of their son, Arthur, as a spirit guide. But grief has had a damaging impact on them both – and Myra believes her work can bring some life back to their lost son. Keen to gain more recognition – and therefore for their son – she urges Billy to kidnap the daughter of a rich couple, so that she can “discover” the child through her spirit guide. However, events soon spiral increasingly out of control.

Bryan Forbes writes and directs (and produces, with Attenborough) this unsettling and often tense film, which shares DNA with ghost stories (but contains no terrors) and psychological dramas. It’s also a superbly acted chamber-piece, an acute psychological study of two deeply traumatised individuals who have responded very differently to personal tragedy and found themselves locked into cycles of behaviour that are becoming increasingly destructive.

Forbes shoots the film with a fly-on-the-wall intensity, giving the exterior scenes a cinéma verité style, concealed cameras capturing unwitting crowds walking blithely through a kidnap drama. There is a kitchen-sink realism here, and elements of psychological hammer horror, with the viewer never quite sure how far this couple will be willing to go. The eerie score by John Barry, mixes in with hauntingly dominant sound designs (especially of dripping water in the film’s opening moments) to create an oppressive, claustrophobic atmosphere that leaves you not in the least surprised that the psyche of its two lead characters have been so badly damaged.

That sense of disturbance fits perfectly with the lack of planning around the couple’s entire operation. Despite sparks of ingenuity (many of them dependent on Billy’s bland forget-ability and bank-managerish blending into the crowd), once the child has been kidnapped, they have no idea of the next step or how (or even, it seems, if they want to) exploit the situation. It becomes increasingly clear that the plan is not a grand design, but a final desperate attempt to find meaning in their own lives and (certainly in Myra’s case) to provide some sort of connection to their lost son.

That lost son hangs over the whole film, his pointedly not-real ghostly presence having contributed hugely to Myra’s mental disintegration – and also having crushed the life out of Billy. Myra has clearly never recovered from the shock and grief – more facts of which are revealed as the film plays out, culminating in a scintillating scene of emotional confrontation between the two – and Billy, in a desperate attempt to comfort his wife, has instead become the chief enabler of her fantasies.

It makes for an elegant two-hander of stirring emotion – and requires two actors at the peak of their game. As Myra, the little-known Kim Stanley is a sensation. A Broadway star (the “female Brando”) but with only one film credit prior to this (and only three more after this), Stanley brings a brilliant method technique but also a freshness and theatricality matching perfectly the film’s theatrical roots and heightened sense of reality. Stanley delivers an immersive performance that walks a fine tight-rope between calculation, delusion and psychological collapse. It’s a show-piece role, but Stanley largely avoids overplaying, instead exploring the deep emotional scars in the character with a sensitivity that makes Myra someone to pity as recoil from.

Opposite her, Attenborough delivers one of his finest performances as the complex, conflicted Billy. Seeming at first just a brow-beaten husband, it becomes clear Billy has in fact taken on a great emotional responsibility for protecting and comforting Myra, a dedication that has (step-by-step) led to him catering to her every misguided demand. It’s a generous, very subtle performance, of a fundamentally good man who performs misdeeds because he believes it is for the greater good, confusing love for his wife with refusing to make her confront reality.

These two excellent performers perform a complex dance where our perception of the power dynamics in the relationship constantly shift. At first Myra appears to hold all the aces, brow-beating the meek Billy and lecturing him on everything from the spirit world to classical music. However, it slowly becomes clear – as does Myra’s lack of grasp of reality – that Billy is the quieter but stronger character, whose dedication and strength has kept the couple going.

Séance on a Wet Afternoon is at its best when exploring the relationship between these two and provides two fine actors magnificent opportunities which their seize with relish. Its pace flags a bit over the two hours – a tighter 90 minute run time would probably have helped it – and while it’s lack of drive in the plot does reflect the confused ambling scheme at its heart, it does mean the film can drift. But this is a fine psychological study, well-made and superbly performed.