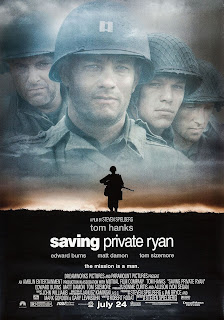 There are few films you can categorically point to as changing cinema. Saving Private Ryan is one of those films. Before it, there had never been a war film like it: afterwards there would not be war film uninfluenced by it. Spielberg turned the Second World War from the picturesque setting for an all-star epic, into something immediate, ground-level and utterly, terrifyingly all-consuming. The “boots on the ground” vision of war, that didn’t shirk once from capturing the horrific cost and terror of war and had no suggestion of adventure. Hollywood would look at war differently ever more.

From landing at Omaha beach on D-Day, the film follows a single week in the lives of Captain John Miller (Tom Hanks) and a platoon of soldiers, sent on a ‘public relations’ mission. Three brothers have all been killed in action, with their mother receiving notification of their deaths all on the same day. The top brass decide she has suffered enough and that her last remaining son James (Matt Damon) should be bought home. Problem is, he’s a member of the 101st Parachute Airborne – and no one is quite sure where he’s been dropped. Miller and his men are to find Ryan and bring him home – despite the resentment of his men that their lives at being put at risk to save one man.

Any discussion of Saving Private Ryan begins with that Omaha beach sequence.  It’s hard to even begin to understand the impact this sequence had on audiences in 1998. Quite simply, we’d never seen anything like it. Expectations before its release was that Spielberg was producing a crowd-pleasing, Dirty Dozen style men-on-a-mission film. No one expected a savage, brutally realistic vision of what warfare actually meant, with its brutal, swift and random death.

The sequence starts with Spielberg panning across the faces of soldiers in the landing craft Miller and his company are riding to the beach. He lingers on these faces – only for them to be promptly ripped to pieces by machine-gun fire the second the doors open. Omaha beach is a savage nightmare, the closest thing you can image to hell on earth. Machine gun bullets rip down relentlessly on the pinned down soldiers – and the camera throws us right in there with them. 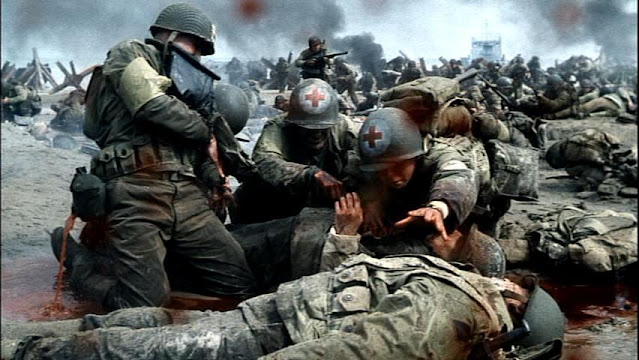 With drained out colours, hand-held camerawork (some of it operated by Spielberg himself), mud, blood and sand spraying up into the lens, it’s all-consuming. The film’s sound design is awe-inspiringly good, every single sound (the splatter of sand, the thud of bullets ripping through flesh, the snap of rifles) builds into a shatteringly immersive crescendo with no respite. Spielberg doesn’t shy away from the horror. Bodies are mutilated by bullets. Heads are caved in. A soldiers walks the beach, carrying his own severed arm. Medics treat soldiers drowning in their own blood, crying for their mothers. Bullets claim the brave and scared alike.

You watch and you can’t believe anyone emerged from this alive. The cost of getting off the beach is seismic. The visceral horror doesn’t let up over the first 25 minutes as Miller’s company – suffering huge losses – struggles from landing craft, to beach, to storming the German defences. Our ear drums are assaulted by bullet sound effects, and every single step shows us some new horror. There are no long-shots, no cut aways and the only peace we get is when we share with Miller his tinnitus from narrow-escape explosions. The brutality is even-handed – after the massacre on the beach, the US soldiers show no mercy to the Germans (two of whom are gunned down surrendering and begging for mercy), officers urging their men to “let ‘em burn” as on-fire Germans fall from incinerated machine gun banks.

It’s extraordinary – and sets the tone. Combat is immediate, visceral, terrifying, brutal and always carries a heavy cost. The human body is infinitely fragile and every death – high or low – is met with fear, loneliness and regret. Veterans had to leave the cinema during screenings to compose themselves, and viewers were stunned into silence. You could watch Saving Private Ryan and feel you never even began to understand what war was until then – and that even with this taste you can still never understand it. It’s a brutal zero-sum game with only losers.

Any film would struggle to follow that: but Saving Private Ryan does a fabulous job of maintaining the dramatic force of its opening sequence before its book-end final battle, as the remains of the platoon join Ryan’s unit in a seemingly-hopeless defence of a vital bridge in a bombed out town (another grim, gripping and stunning slice of war with the added kick to the guts of watching people we have spent the entire film with being blown away and ripped apart by bullets).

Spielberg’s film explores what makes the cost of this worth it. It’s a film about the power of sacrifice: the sacrifices the men make to find Ryan, but on a larger scale the sacrifices this whole generation made for those that were to come. When Miller urges Ryan to “earn this”, he’s speaking to us all. Men like him died to give us the chance to make the world a better place. The sacrifices of this platoon for one man is all part of the same price this entire generation made for the ones that were to come.

And one of the things sacrificed is the rules of humanity. Prisoners are shot, unarmed men are killed – if you play this game, you play to win. Thrown into Omaha, the audience understand this – meaning we feel as little patience with translator Upham (a fine performance of out-of-his-depth-fear from Jeremy Davies), who whines about right-and-wrong, as his colleagues, who understand living-and-dying is the only issue out here anyone cares about. 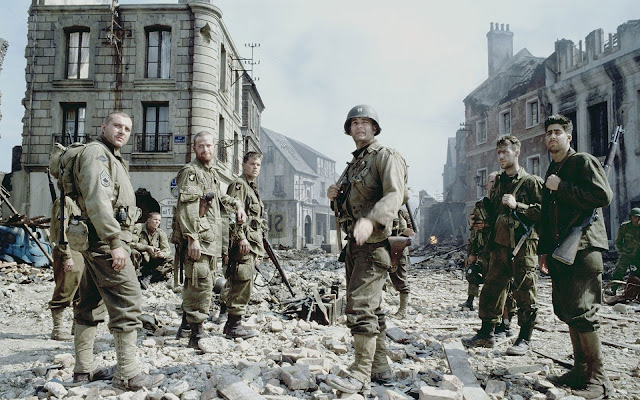 Understanding this depends on relating to the soldiers – and the cast has been hand-picked for that. None more so than Tom Hanks, channelling his relatability into a home-spun, ordinary man forced into extraordinary and brutal situations that have left a shattering mark on him. With an intermittent tremor in his hand, Hanks embodies the stoic sacrifice of a generation. It’s a landmark performance. There are many fine performances in the film, Tom Sizemore (battling drug addiction and a promise of instant dismissal if he relapsed) perhaps the stand-out as his hardened sergeant.

If Saving Private Ryan has a fault, it’s that it falls into Spielberg’s sentimentality trap. Sometimes the man can’t help himself. The film is bookended by an old man visiting war graves – someone we discover at the film’s end is Ryan himself. As if somehow still not trusting us to get the message about sacrifice and horror the film has so effectively communicated, old-man-Ryan explicitly tell us, tearily asking his wife if he has led a “good life”. It’s a hammer-home the film doesn’t need and dents its final impact. (I’d also say the film has endless empathy for US Joes, but sees all the Germans as a ruthless swarm fighting an evil cause, although many of them were also as scared).

But these are quibbles in a film that does so much right – and which reinvented an entire genre. It’s one of Spielberg’s masterpieces, a stunning display of directorial skill and immersive film-making, and its impact never seems to lessen. It gets as close as any film can to showing us war – and yet it is still a million miles further away than most of us (thankfully) will ever have to get.