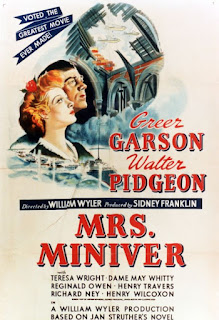 Mrs Miniver was made when history was in flux: conceived at the height of the Blitz, shot and then parts re-shot either side of Pearl Harbor and released in 1942 after America had entered the war. A patriotic flag-waver, designed to build American sympathy for a Britain standing alone, it was a huge hit, won Best Picture and had a profound impact on Allied morale (Churchill called it more help to the War effort than a flotilla of battleships). It still carries an inspiring, cockle-warming charm and a hefty emotional punch, made even more affecting by the stoic determination (rather than hand-wringing emotion) every setback is met with.

In a small village just outside London, lives the Miniver family. Kay Miniver (Greer Garson) cares for her family in a large country house. She has three children with architect husband Clem (Walter Pidgeon). Their life is contented – and then war breaks out. Oldest son Vin (Richard Ney) joins the RAF – after falling in love with Carol (Teresa Wright), niece of the local grandee Lady Beldon (May Whitty). Clem joins the ships travelling to Dunkirk. Kay holds the domestic fort, protecting her family from air raids, facing down a German pilot and helping shepherd her small village through the trauma of air raids to something approaching a normal life.

Mrs Miniver is all about that stoic, British stiff-upper-lip attitude, of doing your duty uncomplainingly and quietly. As they said “Britain Can Take It”, and the film is a celebration of the nobility of perseverance. It’s designed to inspire and it does: it’s melodrama played with a low-key reserve, which is genuine and heart-felt. There is a reason Goebbels (and he would know) called this a “refined powerful propagandistic [tool]” – it makes you completely emphasise and relate to its characters. We share their moments of joy just as much as the profound tragedy of their losses.

And there is a lot of loss in Mrs Miniver – way more than you might expect, with the film’s final act throwing at least two painful gut punches you don’t expect. Tragedy touches all of us and war carries away the innocent and undeserving with as much eagerness as it does the militaristic. There seems to be no reason or justice to it – but instead the difficult acceptance of fate and the necessity of being part of a struggle larger than ourselves.

In a powerful speech that concludes the film, the vicar stands in the bombed-out ruins of his local church. It mirrors a scene near the beginning, as he regretfully but with quiet reserve announces the outbreak of war. Now he gives a rousing speech that this is war of all the people, against the tyranny that threatens us, where the dead our mourned but not forgotten. It’s a powerful speech (brilliantly delivered by Henry Wilcoxon), of the painful necessity of duty at the time of war that still stirs (it was distributed nationally by Roosevelt’s insistence).

The stoic, good-natured, supportive community, who protect each other and desperately try to maintain hope and nobility when death could strike at any time, contrasts firmly with the only German we see. A wounded pilot who gains entrance to Kay’s home at gunpoint. Kay calmly disarms him, feeds him and tends to his wounds (after all he is the same age as Vin) – he responds with a vicious speech of violent hate, bragging at the deaths the Luftwaffe have inflicted on Europe. It’s the only time her reserve really breaks, as she slaps him – and even for a moment seems to consider dispatching him. Her delayed shock is clear later when she casually smokes one of Clem’s cigarettes – a mixture of restrained shock, relief, horror and confusion across her face. It’s the closest direct danger comes – and the closest she comes to openly expressing rage and anger at the hand the world has dealt her.

The film revolves around Greer Garson’s (Oscar-winning) performance. Though it’s easy to see Kay as a sort of saint, that’s underestimating the huge burden Garson had: she effectively embodies an entire Homefront of scared people doing their duty. It’s a performance of stiff-upper-lipped warmth, her desperation, fear and protective nature clear in every beat. You can see it in her mix of distracted fear and pride when Vin announces he has joined the RAF, and the front of “everything will be alright” she puts on for the children during an air raid that tears her house apart.

Of course, that disaster is met with a “I always wanted to redo that dining room” fortitude by her husband, Clem. Pidgeon and Garson forged a partnership that would run through several movies here, and spark off each other wonderfully. Pidgeon gives a solid grounding to Garson, while she helps find warmth and humanity in an otherwise distant actor (Pidgeon lacks Peck’s – who he resembles in many ways – ability to convey warmth under reserved dignity). Pidgeon’s stirring sense of duty excels, not least during the Dunkirk sequence.

That sequence is very well executed, a small series of boats gradually growing in size until they fill the Thames. When duty calls, people respond with gusto and pride. Alongside this, normal life continues as much as possible: not even the war will stop the flower show. This remains a heart-warming centre piece – pinched for an episode of Downton Abbey – as Lady Beldon overrules the sycophantic judges and gives the prize to the deserving winner, local station manager Mr Ballard (Henry Travers, sweet but receiving a generous Oscar nomination).

The acting is pretty much spot on. Teresa Wright (Oscar winning) is endearingly genuine and vibrant as Vin’s wife to be (and Lady Beldon’s niece) Carol. May Whitty, channelling those grande-old-dames-with-hearts-of-gold, gets every beat right, from comedy to tragedy, Wilcoxon is marvellous. It’s all so heartfelt and earnest you can overlook the fact most of the (largely American and Canadian) cast go for cod-Brit accents or cliched working class vowels – just as you do the fact that neither the towns or countryside in the film looks particularly British (an opening sequence in London looks plain wrong in every sense).

And you can’t fail be stirred by its celebration of quiet determination and unshowy self-sacrifice. You can certainly argue that it’s not a work of art, like other films nominated that year for Best Picture. But, none of them would have (or continue to have) the emotional impact this has. Sure, it feeds off an American nostalgia for English-country-village life – but it does so with a noble cause. Well-acted, very well directed, it still inspires and continues to provoke pride today.