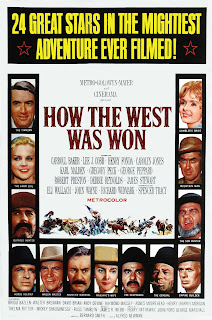 How the West Was Won was the Avengers: Endgame of its day: every star of the biggest box-office genre in America coming together for one epic adventure that would stretch over generations. Stewart! Fonda! Peck! Wayne! Together for the first time (only of course they are not, none of them appearing the in same scene). Even more than that, How the West Was Won would be filmed in Cinerama, a three-screen shooting method producing a panoramic image. All this would make How the West Was Won the biggest, grandest, largest film ever made. It was a massive box-office success, nominated for eight Oscars (including Best Picture) and wowed audiences.

Plot wise though, it’s basically a series of short films cobbled together into a single film. The stories are basically self-contained, although some actors cross over (especially George Peppard and Debbie Reynolds). The first episode The Rivers covers the migration west, down the river, of the Prescott family, taking on river pirates and allying with James Stewart (looking at least twenty years too old as a young drifter). The Plains sees Debbie Reynolds, daughter of the Prescott family, migrate further West and eventually marry gambler Gregory Peck. The Civil War see Stewart’s son George Peppard caught up in the war. In The Railroad, Peppard reluctantly runs security for ruthless railway builder Richard Widmark. Finally, in The Outlaws an older Peppard attempts to retire, but not before one final shoot out with old enemy Eli Wallach during an attempted train heist.

All these short stories – each about 30-45 minutes in length – are entertaining. So entertaining that you won’t mind at the end that you have no idea how the west was actually won (I assume it’s something to do with progress and the law) or that the characters are basically actors riffing off their own personas rather than fully realised individuals. Despite the attempt to build the story around one  family (the Prescott-Rawlings), the stories are so disconnected and the characters so lightly sketched, with such huge time jumps, each story might as well be about completely new characters.

Not that there is anything particularly wrong with that. But it boils down to the key issue with How the West Was Won, a very flabbily constructed film that lacks any real sense of guiding narrative or vision behind it. It’s a series of set pieces, which are all about scale – the river rapids, the battles of the Civil War, the final train-set shoot out – in which some loosely defined characters live their lives. There are some decent performances – Debbie Reynolds does a very good job anchoring a couple of stories (plus we get to see her do some song-and-dance routines), while Peck (a smooth operator) and Fonda (a gruff woodsman) have the best parts among the stars. Others, like Wayne, pop up for but a few seconds.

They needed all these stars to fill the frame. How the West Was Won’s main problem is also its principle reason to exist. It was designed to showcase the wideness of Cinerama, one of only two films to use the technique. Designed to be projected into curved screens, the technique essentially used one massive camera to produce an image so large it needed three synchronised projectors to screen it. This led to an impossible wide frame to fill, with two clear joins in the middle. The challenge of shooting this was not an enjoyable one for the directors.

To cover the visible joins, nearly every scene in the film sees an object placed one-third and two-thirds of the way through the image (usually a tree or a post). The actors stand carefully on their marks in their assigned third of the image. Close ups involved flying the massive camera almost into the faces of the actors (and even then it only produced an image from the waist up). Awkward compositions abound – either with actors standing rock still in front of huge scenery, or actors standing in carefully assigned rows, standing on marks they never move from.

The sweeping shots of the American west look impressive, but in a National Geographic way – it’s simply fitting as much of the imagery of the countryside in as possible. It was a hugely difficult job for the directors. It was not helped by two of them being competent journeymen and all three of them having done their best work in 4:3. Quite frankly I don’t think any of them have a clue about how to fill a frame this mighty. Instead, the film for all its grandeur is frequently visually conservative and unimaginative to look at. It’s got huge landscapes, but no real inspiration.

How the West Was Won is an enjoyable curiosity. It is very rarely, if ever, seen as it was intended on a Cinerama screen (the version I watched on a large television, still showed the slight fish-eye effect at points of a curved image flattened). Telling five short stories, each of them entertaining enough, it keeps the interest. It has a lusciously beautiful (famous) score by Alfred Newman that captures the spirit of the West. But, for all its grandness, it’s a strangely small experience.