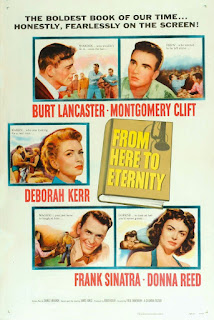 Dominating the 1953 Oscars, From Here to Eternity is exactly the sort of sweeping, highly-professional studio epic Hollywood at its best produced in its Golden Years. Everything turned out pretty much right, with iconic imagery and characters, and skilled production and acting turning a soapy story into something quite profound. From Here to Eternity is entertainment-as-art, a sharply intelligent film that sails along smoothly. It feels like a generational progression from Casablanca – it may not quite hit those heights, but it deserves to be in the same conversation.

It’s 1941 at Pearl Harbour and three soldiers discover going their own way, rather than conforming to rules and expectations, causes no end of trouble. Private Prewitt (Montgomery Clift) is repeatedly hazed by his comrades (with the support of his CO) for refusing to join the boxing team. A champion boxer, Prewitt retired after accidentally blinding an opponent and nothing will persuade him to go back. His only comfort is with local social club ‘hostess’ Lorene (Donna Reed). First Sergeant Warden (Burt Lancaster) is persuaded to try for officer – because otherwise he risks prison for his love affair with the CO’s unloved wife Karen (Deborah Kerr). Private Maggio (Frank Sinatra), Prewitt’s only friend, is a loyal wild-card who can’t stick to the rules and is targeted by brutal stockade sergeant “Fatso” Judson (Ernest Borgnine).

From Here to Eternity sounds like a great big soap, a sort of 1980s glossy TV mini-series made before its time (it was later remade exactly as that). It’s got that in its DNA, but is made with such luscious, professional, old-school Hollywood excellence it becomes something special. Superb craftsmen work in every position to produce a classic melodrama with touches of romance, thriller, war drama and tragedy. With excellent performances across the board (Sinatra and Reed both won Oscars, while Lancaster, Clift and Kerr were all nominated), FHtE tells emotive, empathetic stories about genuine characters trapped in situations beyond their control.

The film is a masterclass in adaptation. The original novel – a popular tome of its day – tells a story crammed full of sex, STDs, homosexuality, bad language and violence across its 800+ pages. No wonder it was a hit – and no wonder, under the Production Code, it was thought impossible to adapt it into a film. Screenwriter Daniel Taradash carefully reworked and ‘hinted’ at several things that could not be explicitly said (for example, no one calls Lorene a prostitute, but you’d have to be pretty dense not to realise she is doing more than pouring drinks in that bar). Restraint, as it often did, demanded invention and bought out the best (and subtle work) in people. The film’s requirement to focus on dialogue and character rather than controversy hugely works to its benefit. 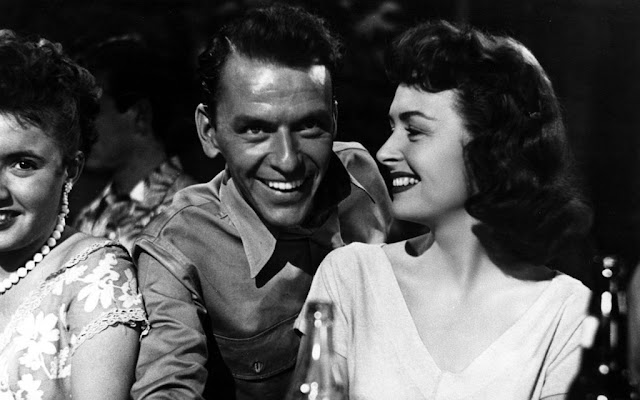 Zinnemann was the perfect director for the material. Drawing wonderful performances from the actors, he also keep the film intimate, drawing us closer to the characters over scale, despite the temptations of the film’s location shooting in Hawaii (Zinnemann pushed strongly against shooting in technicolour and widescreen). The film also fits perfectly with one of Zinnemann’s key pre-occupations: the struggle of principled men (most strikingly Prewitt) in a society that demands them to say or do something against those principles. Just as the townspeople in High Noon wanted Marshal to run and the Tudor court wanted More to swear allegiance, so our characters buck against conforming with the roles they are expected to play.

You can see why the military – after supporting the project – were less happy when they saw the film. The individual is championed at the cost of the machine. Prewitt’s principles are praised, while his regiment is hopelessly corrupted by his incompetent and careerist commander. The hazing is endemic, and supported from above – and no one even notices or cares that Fatso is also abusing his position to brutalize Maggio. The CO is so useless – as well as ruining his wife’s life, rendering her infertile and cheating on her all over town – that the company is effectively run by First Sergeant Warden, the only NCO with the courage of his principles. Under pressure from their army sponsors, the film does see the chain of command cashier the CO (a scene Zinnemann hated) – but the sympathy is with the individual rather than the system.

From Here to Eternity is also a highly effective romance. Its most famous image will always be the clinch between Lancaster and Kerr, kissing and embracing while the turf washes up around them. But the film is also realistic – its why it remains so effective. Warden and Karen are made as miserable by their growing love as they are happy (they even comment on this). Relationships are never an easy ride, and demand constant dedication. Lorene and Prewitt’s relationship is far from rose-tinted, with the two of them constantly forced apart by their own mistakes and choices.

It’s melodrama told with emotional intelligence and realism – and Zinnemann gets great performances from great actors. Lancaster brings immense strength and purpose to Warden, but also a concealed vulnerability and decency. Kerr – revitalising her career after a string of “good wives” – brilliantly conveys Karen’s desperation and misery, along with her wary hope her life could change. That moment on the beach, the surf washing around them as they make-out is a rare moment of relaxed happiness. Other than that, its one tough conversation after another - stolen moments in bars or cars, where the two of them confront the difficulty of their situation, but also their need for each other. That's old school romance for you - unavoidable, but never-endingly difficult and even a little painful.

Sinatra (in the role that changed his career – and the debate around how he got the role inspired that horse’s head in The Godfather) brings charm, cheek and tragedy to Maggio. How did Maggio end up in this man's army? He's quietly fun loving, but bucks the rules like almost no other character in the film. Sure he's an upstanding guy - the only one who sticks by Prewit and defends him - but he can't follow a simple order. Mostly because he's not really disciplined enough. Plus he makes enemies - worst of all Borgnine's bruising sergeant. He'd be so much happier running a bar for soldiers than he ever is being a soldier himself. 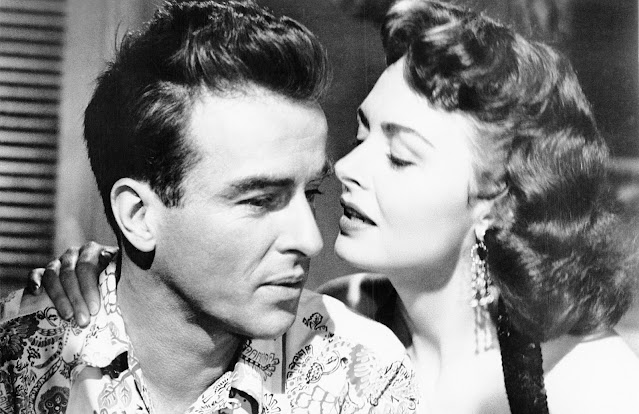 This makes him very different from Clift's Prewit. Clift gives one of his finest performances as this fully-realised tragic hero. Prewit is a man of principle who, for the best reasons, makes choices that have a terrible impact on him. He'll stand by his decision not to box, even though it opens up a bucket load of unpleasantness for him and Maggio. If that leaves him with one friend and no supporters, so be it. He may not look like a boxer (the studio wanted a more muscular lead), but he is every inch the emotionally conflicted, guilt-plagued and confused GI, stubborn but profoundly sincere, with the strength of character to stand alone, but the vulnerability to need affection from Lorene (and respond like a lovesick kid when he thinks she has spurned him). It’s a complex, mature and excellent performance.

All these events are eventually dwarfed by the outbreak of war. If there is one thing that Zinnemann will accept is bigger than the individual, it's world war. The film quietly counts down to the attack on Pearl Harbor (without the characters realising it), sneaking us peaks at calendars and reports to let us know how close we are to the fateful day. When it comes, it reveals the characters of the people we've been following. Warden takes command in a way his CO never could. Prewit, hiding out with Lorene (Reed by the way is marvellous, her investing Lorene with a real world-weary sadness), decides its his mission to return from AWOL, despite the dangers this will cause him. The attack is grippingly but simply filmed.

From Here to Eternity is a complex film, made with real professional skill, and a rewarding character study. Zinnemann gets the tone right at almost every single point and draws out brilliant performances from a very strong cast. As an example of Hollywood Studio film making, it’s hard to beat.