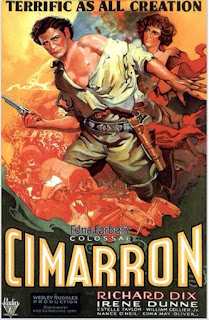 The only reason Cimarron doesn’t regularly top polls of the worst Best Picture winners ever made, must surely be because so few people have seen it since 1931. Believe me you are not missing anything. A ponderous, pompous, puff of a movie, Cimarron might have tricked people into thinking it looked radical, daring and inventive at the time – but it’s fooling no-one today.

Over 40 years in Oklahoma, from the Land Rush of 1889, the town of Osage grows from tents and mud hats to a thriving modern 1920s city. Part of the story of the town are the lives of two of its founders, Yancey Cravat (Richard Dix) and his wife Sabra (Irene Dunne). Yancey is a noble, man’s man with wanderlust, who rides into Osage, guns down the bullies and campaigns for the rights of the poor and down-trodden via his newspaper. Sabra picks up the pieces when he wanders off (often years or decades at a time) raising the children, running the newspaper and eventually becoming a congresswoman.

It should be a sprawling epic, but Cimarron is a dull fart of a film that runs out of any narrative drive after its opening hour (which largely focuses on 1889-1893) and collapses into a series of disconnected, uninteresting scenes, very dully filmed, that sees our characters obtain increasing amounts of old age make-up while shedding what little personalities they had to begin with.

Ruggles shoots the film with such tepid flatness, you might as well be in the theatre. Most of the scenes sees the camera set in a static position (to capture the sound – the sound mix on the film, by the way, is appalling making most of the dialogue extremely hard to hear) with scenes taking place in medium shot allowing us to see the sets and follow the actors walking in and out. You might as well be sitting in the theatre – although, if you were, it would be harder to leave.

It’s not helped by the generally terrible acting, pretty much across the board. Irene Dunne just about emerges with some dignity by underplaying and even showcases a surprising amount of feminine independence – even if her character is an insufferable prig, demonstrating flashes of racism as and when the plot requires. But you can at least see why she continued to have a career – just as you can see why this was Richard Dix’s highest profile sound film. Dix doesn’t know whether to go for a declamatory theatrical style or to telegraph every emotion with poses, silent movie style. So, he does both. The result is a ludicrous collection of poses and grandstanding, that his wild eyes, dyed hair and middle-distance starring stance doesn’t help with. It’s a dreadful performance.

It’s fitting it sits in a film as bad as this one. The only moment of invention the film manages is its opening sequence, restaging the Oklahoma Land Rush. This set piece uses an army of carts and horses to restage the entire land grab from start to finish, the camera capturing these waves of prospectors charging into Oklahoma to grab the best bits. Nothing else in the film beats it, not even the gun fight that occurs part way through. Instead, the film degenerates into long, vague scenes, usually centring around a self-important speech of self-righteous bluster from Dix.

Nothing looks more dated in the film than its depiction of anyone not white and Christian. Now I will cut the film a little bit of slack here. It’s clearly trying to make a plea for greater toleration. Dix’s character passionately campaigns for the rights of Native Americans (or “the red men” as he puts it). He treats his black servant Isaiah with love and affection. He defends the Jewish prospectors. This film is trying to push an agenda more advanced than its time. It gets points for that.

It loses them all though for how these characters are presented. The Jewish characters are smiling, wizened Shylocks. The Native Americans are exotics, forever “How”-ing and happily accepting their status as second-class citizens. Worst of all, Yancey’s servant Isaiah is one of the most shockingly racist caricatures put on film. You think Gone with the Wind is bad? Watch this. Isaiah is stupid, muddle-headed, speaks in a clumsy patois, ridiculously fawning, delighted to be a servant and treats the white men like Gods. The film encourages us to chuckle at him, while patting his head with a smiling paternalism. All the tragic death scenes in the world can’t wash the bad taste out of the mouth. Back then it was fairly forward-thinking – today its jaw dropping.

The main problem is the film is a dull, drifting, dawdling mess that goes nowhere and asks us to root for two characters who are both, in their ways, self-important prigs, convinced they are right about everything. It builds to nothing at all, other than mirroring the sort of relentless march of time you’ll experience while watching it. It’s patronising, uninteresting and outstays its welcome. I can’t even work out why it’s called Cimarron (the name of Yancey and Sabra’s son). Is it because it’s a film asking us to think about the future? It can’t be because Cimarron is important – in ten minutes he ages from about 12 to 40. But then the fact the title refers to an empty non-character is somehow fitting for a film that really should be put down at the earliest opportunity.