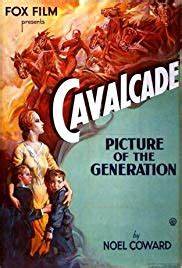 Before Upstairs, Downstairs and Downton Abbey there was Cavalcade. Winning the Best Picture of 1933 (beating out more highly regarded films today – and King Kong wasn’t even nominated!), Cavalcade shows a romantic weakness for dramas about the struggles of the British Upper classes and their servants is nothing new. Based on Noel Coward’s play, it’s a grand, soapy drama that’s been done better since (not least by those two shows) but makes an entertaining genre template.

Carefully ticking off historical events between 1899 and 1933, the film follows the Marryot family – father Robert (Clive Brook), mother Jane (Diana Wynyard) and their two sons Joe (Frank Lawton) and John (Edward Marryot) – and their servants turned pub owners the Bridges – Albert (Herbert Mundin), Ellen (Una O’Connor) and their daughter Fanny (Ursula Jean). From the Boer War via the death of Queen Victoria, the first flight across the Channel, two characters taking an unfortunate honeymoon trip on the Titanic to the First World War, we see how events affect both families (invariably with tragic consequences) as Britain slowly changes.

You can look at Cavalcade and find it hilariously old-fashioned. The accents are so sharply clipped they could be cut-glass, while the working-class characters speak with “evenin’ guv’ner” ‘umbleness. In preparation for the film, the Studio flew a camera team over to film the London production (then hired several of the actors to repeat their roles, including O’Connor) and the film sometimes feels like a slightly stuffy stage production bought to the screen.

This is most noticeable in Diana Wynyard’s performance. She clearly has no idea to act for the camera – and Lloyd didn’t correct her. ‘Asides’ see her frequently turn towards the camera and stare into the middle distance. For the innumerable times she is called onto to weep, she throws herself to the floor dramatically. With her declamatory style, she’s constantly playing to an imaginary back row. It sticks out particularly badly when watching the far more experienced Brook relatively underplay each scene without physically telegraphing every emotion. Surprisingly Wynyard landed an Oscar nomination – but soon left Hollywood and returned to the stage.

The rest of the cast are split between the two approaches, all while balancing the stiff-upper-lipped demands of the script, with its “I must go the war/Don’t go darling/I must they won’t start without me” exchanges (to paraphrase Eddie Izzard). The younger actors – John Warburton and Margaret Lindsay as the young couple booking a berth on the Titanic – offer performances so restrained they feel strait-jacketed. The working-class characters cut lose a little. Una O’Connor is a little broad, but quite engaging while Herbert Mundin gives possibly the best performance as a landlord too fond of his own product. Ursula Jeans makes a fine romantic lead as their daughter, delivering decent renditions of several songs in particular “Twentieth Century Blues”.

Those blues are nominally what the film is about, as the world leaves the Marryots behind. It’s bookended by two New Years –in 1899 and 1933 – during which time the world has changed completely. War has shattered the cosy Victorian status quo, leaving millions dead and the Marryots struggle to recognise this new England. Cavalcade only lightly engages with themes of societal upheaval – probably because it is simultaneously wallowing in so much nostalgia, that Coward’s more sombre ideas would bring the party crashing down.

Instead, Cavalcade luxuriates in nostalgia, loving the idea of a hierarchical, old-fashioned, English world where everyone knows their place (even after leaving their employ, the Bridges treat the Marryots with deference, while the Marryots look at them with a paternal indulgence). But its soapy stories – predictable as they seem to us now – are actually rather effective, and the flashes of genuine emotion (best of all, when Brook’s Robert says farewell to his son as he heads out on “one last patrol” in the last days before the Armistice) are surprisingly effective.

Lloyd’s direction of the larger set-pieces also show an impressive flair. The domestic scenes may seem stagey, but when the camera films a crowd it feels ambitious and dynamic. A huge pier scene with hundreds of men heading to the Boer War is handled very well. Bustling street scenes feel real. Wynyard’s finest moment comes in a crowd scene as she tries to merge into a crowd celebrating the Armistice, while caught up in a personal grief. A montage covering 1918 to 1933 is effective in showing the march of change.

Best of all is a wonderful montage communicating the horrific cost of the First World War. Lloyd presents the war as a never ending stream of soldiers marching into a tunnel. Initially the backdrop around is an English town, with smoking chimneys. This morphs into No Man’s Land, with the chimney smoke becoming explosions. Super-imposed over this are images of soldiers in close-up, at first marching in smiles, then dying at an accelerated rate. Nostalgia turns into Danteish circle of hell, innumerable bodies piling up. It stands out as a moment of expressionist inspiration (and must have had a strong impact on the audience).

It’s the finest moment in Cavalcade, your enjoyment of which will be directly related to how much patience you have with Downton Abbey. Find that an enjoyable diversion (as I do), and you will certainly find something to enjoy in Cavalcade. If Downton’s rose-tinted view of Edwardian social structures puts you on edge, you will struggle. I was pleasantly surprised by how charmed I was by it. And that World War One sequence is worth the price of admission alone.