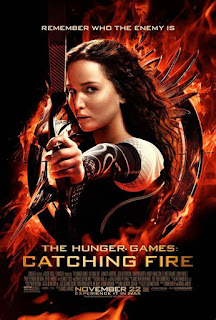 It’s a year on from Katniss (Jennifer Lawrence) and Peeta’s (Josh Hutcherson) victory at the 74th Hunger Games. They and the other victors live a life of relative luxury in the dictatorship of PanAm. Problem is Katniss’ humanity and defiance of the ‘rules’ from her victory have started to inspire whispers of discontent into open mutterings. When a “victor’s tour” fails to impact on her lustre, President Snow (Donald Sutherland) follows the suggestion of Games Maker Plutarch (Philip Seymour Hoffman) – let’s celebrate the 75th Anniversary by chucking two victors from each district back into the ring. As the only female victor from District 12, this means Katniss will either wind up dead – or be put into a position where she has to abandon her humanity to become the killer she never wanted to be. But is there another game going on inside the game?

Catching Fire is an entertaining, fast-paced, well made sequel to The Hunger Games that successfully broadens and deepens the franchise. Far from being a difficult middle chapter, it’s well structured to tell a pretty self-contained story that riffs on events from the first film without being enslaved to them. It also very sharply deepens the social and political commentary from the first film, widening our knowledge of PanAm and our understanding of its corrupt, murderous system.

Lawrence’s direction is punchy, pacey and provides plenty of emotional depth and scope. It’s a film that skilfully balances questions of trauma and the horrors of murder-for-entertainment, with poundingly exciting action sequences in the games themselves. In some ways Catching Fire is the only film in the series that ends (more-or-less) with a triumphant bang, and it’s possibly why the film is the most satisfying of the lot, with the cleanest structure. It also has the advantage of widening the outer edges of the world of the film, while still largely operating within the self-contained world of the games arena.

Within that, it also manages to keep us on our toes. Many of the same set-ups – both in the build-up to the games and the action in the arena itself – echoes or reflects what we’ve seen before. The film uses this to throw at us moments the surprise us – as allegiences are revealed – or provide opportunities for dark humour (such as the setpiece Katniss decides to use to showcase her skills this time round, markedly, darkly different from her archery display in the first film).

The film is entertaining and also thought-provoking. Within the confines of its 12A certificate, it doesn’t flinch from the oppressive horror of PanAm in the districts, where sudden executions and brutal beatings are an everyday occurrence. Similarly, it demonstrates even more the heartless opulence of the capital, a world of hedonism where no questions are asked about what props this whole system up.

And at the heart we have Katniss. Wonderful played, with a full-blooded emotional commitment from Jennifer Lawrence, Katniss is slowly become aware of her iconic status, but hasn’t changed dramatically from the at-times judgmental, prickly, abrasive loner she was at the start. She’s a reluctant figure-head for a new movement, but that’s what makes her both so effective and so moving. She’s not pretending or playing a hero – she simply does the right thing, because that’s what she believes she should do. Sure she makes a host of poor character choices, but that’s what genuine people do.

Lawrence’s grounded emotional realism in the lead, helps sets the tone for the whole franchise as something surprisingly gritty, dangerous and at times quite emotionally challenging. Hutcherson does fine work as the true heart of the film series, a decent, kind man who not only sees but also brings out the best in other people. Claflin is very good as a matinee idol victor who keeps us guessing on his motivations. Harrelson and Banks provide skilled depth to characters that could have been flamboyant cartoons. Sutherland enjoyably quietly munches some scenery as the dastardly Snow, while Hoffman coasts showily but effectively.

Catching Fire bursts along with a great deal of flair and lets us really see how despotic regimes like this operate. Katniss is manipulated into situations designed to fit a narrative that will cement the position of the regime. Ordinary people are corrupted by the wickedness around them. Humanity is seen as a dangerous quality. It’s intriguing and way more insightful than you might expect from a YA blockbuster. And its treated with a profound respect by everyone involved.

And it works because it also tells a cracking, entertaining story, revolving around richly drawn characters with fully fleshed out hinterlands and personal story arcs. For all it takes place in a dystopian future, it feels a real and grounded story. And its hard not to relate to a film where the central character, for all her flaws, is fighting for her right to not kill, maim and slaughter those around her for entertainment: who clings to her humanity despite all temptations to the contrary.

Catching Fire is also blessed with being the neatest, most straight-forward and cinematic of the stories (it’s the only film in the series that ends with anything near a triumphant bang rather than a searching question – for all that it’s a compromised triumphant bang). Told with verve, smoothness and pace it’s a very entertaining movie – and surprisingly rewarding.