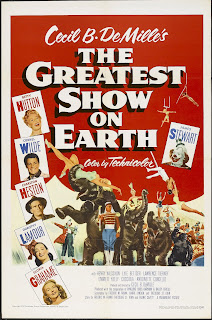 When Crash was named Best Picture, did The Greatest Show on Earth do a backflip of celebration? Finally, when the topic “What is the worst Best Picture winner of all time?” came up, the answer would no longer immediately be “Well The Greatest Show on Earth of course”. Now, there could be an actual debate. Hard to believe but this film was the biggest hit of 1952. Its reputation has been shredded since: it’s proof that winning Best Picture can destroy a film’s reputation as much as it can raise it. Greatest Show is, of course, a pretty bad film. But it’s not catastrophically atrocious. It’s merely pretty bloody awful.

Anyway, it’s all set in a Ringwood circus. Manager Brad Braden (Charlton Heston) is so in love with the circus, he has “sawdust in his blood” (drink every time some variation of this phrase comes up, and you’ll be pissed by the hour mark – which might be the best way to watch the rest). To bring in the crowds he hires famed acrobat The Great Sebastian (Cornel Wilde) – which means shunting previous acrobat star (and Brad’s girlfriend) Holly (Betty Hutton) to support act. It’s a rivalry – but wouldn’t you know it, sparks fly and a love triangle forms. In fact, it quickly becomes a love pentagon as elephant artiste Angel (Gloria Grahame) has past with Sebastian, is in love with Brad (who’s interested) and is fending off the interests of fellow elephant artiste Klaus (Lyle Bettiger). Oh, and James Stewart plays a clown who never removes his make-up because he is actually a doctor in hiding for euthanising his wife (“He killed the thing he loved!” a newspaper headline screams).

All this is packaged together with the puffed-up self-important portentousness that DeMille bought to his Biblical epics. Cecil himself even delivers a grand voiceover at life-changing events like the raising of the big top and the loading of a train. It’s packaged together with endless stagings of assorted circus acts (this film is very slim in plot, but very long in runtime), all accompanied by continual cuts to the circus audience “oohing” and “aahing” as appropriate, or asking such inane questions as “What’s going to happen next?” (a question no one watching the film is likely to be interested in asking). It makes The Greatest Show even more of a museum piece, a recording of a certain type of grand entertainment that doesn’t really exist anymore.

Away from the big budget and long filming of circus acts, we have a dull, derivative and tedious soapy plotline where ridiculous cliches abound and barely a line of dialogue escapes clunking to the floor with the same heaviness as the Great Sebastian when he (inevitably) falls from the trapeze. No single opportunity for heavy-handed foreshadowing is missed, from that accident to the film’s big train-wreck ending, to the numerous hints dropped about Buttons’ tragic background. It’s all packed into a crude series of homages to the glories of small town America (who appreciate the delights of the circus in the way the big city suits never can) and the glorious romance of not even letting death and a train wreck get in the way of the show going on.

At the centre you get the tedious love pentagon. The central figures of this – Hutton, Heston and Wilde – seem to be involved in a private competition for who can give the worst performance. Heston (in a very early role) is wooden beyond belief, the granite self-importance that made him a perfect Moses ridiculously overbearing for the job of circus manager. He and Hutton play most of their scenes with an absurd energy, throwing themselves into poses. Hutton’s performance is bubbly, chirpy and endlessly irritating. Betty is the worst kind of simpering mess, which culminates in her holding herself responsible for Sebastian’s decision to perform without a net. Wilde is saddled with a bizarre accent (where is he meant to be from? I guess “Europe”), and acts with all the comfort and skill of a vertigo-suffering acrobat.

But then to be honest pretty much everyone in this film is awful. I’ll cut a bit of slack for Gloria Grahame, who gives Angel more charm than all three of the leads put together, and James Stewart who can play the melodramatic crap he’s saddled with standing on his head. But literally everyone else in this film is dire: hammy, over-blown, cartoonish and mugging. There is not a single moment of performance or story-telling that is remotely memorable, and everyone is introduced with a clunky, trailer-friendly line of dialogue.

Nothing will remotely surprise you about the plotline – other than that they manage to stretch something as insipid and uninspired as this out for nearly 150 minutes. Though of course most of that is circus acts, or watching circus marches, or listening to Betty Hutton or Dorothy Lamour sing. (In what passes for wit in the film, while Lamour sings the camera cuts to Crosby and Hope, her old co-stars, watching in the stands hammily chewing popcorn.) There is a certain academic interest in watching these circus acts (performed by real circus artistes – although the actors trained so they could get involved), but after a while you are only reminded that it’s not as interesting or exciting as actually being there.

Maybe that’s why the plot becomes so overblown to try and compensate. Love triangles! Falls from a great height! Gangsters muscling in on the circus! A clown on the run from the cops, meeting his mother during the show once every year! A spurned lover who decides to destroy the circus in revenge! No wonder, after the opening scenes focus on the cost of staging the show and importance of staying in profit to continue the tour, our initial set-up, never gets mentioned again. How could it compete with this bizarre parade of nonsense?

It culminates in a train wreck – and of course Buttons is given “the terrible choice” of letting a man die or revealing his medical knowledge (and identity) to save his life. The train wreck has some decent model work. DeMille certainly looks happier dealing with that than attempting to make anything among his romantic sub-plots feel light, fun or natural.

The Greatest Show on Earth is all about show – and whenever it tries to do anything intimate, it invariably falls flat on its face. There are worse films out there, but attaching the mantle of “Best Picture” to this makes it feel worse than it actually is – and its pretty bad on its own merits. When all is said and done, still possibly the worst Best Picture winner ever.