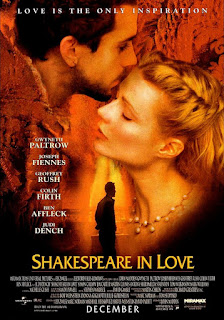 It's become fashionable since 1998 to criticize Shakespeare in Love. It’s one of those films that the Oscar has diminished –you’ll swiftly find someone who’ll say “can you believe it beat Saving Private Ryan?” It doesn’t help that the film become a poster-child for Harvey Weinstein’s Oscar success, his tireless and canny promotion campaign for the film being credited for its sweeping the board. All that buzz is unfair, as it distracts from a hugely enjoyable, very funny, heartfelt and charming film, stacked with scenes that will make you laugh or let out a sad little sigh.

It’s 1593 and Will Shakespeare (Joseph Fiennes) has writer’s block. His latest play, Romeo and Ethel the Pirate’s Daughter just can’t get started despite the fact he’s promised theatre manager Philip Henslowe (Geoffrey Rush) that he’ll have it ready in a few days. Will only begins to find inspiration when he falls in love with Viola de Lessops (Gwyneth Paltrow) – little realising that Viola and the promising young actor in his company, Thomas Kent, are one-and-the-same. Viola, passionate about the theatre, dreams of acting on the stage and falls in love with Shakespeare (while keeping her Thomas Kent identity secret) – but her wealthy parents want her to marry the noble Lord Wessex (Colin Firth). Will these two star-crossed lovers find happiness? Or will their destiny follow the lines of the increasingly dark play about two young Verona lovers, that Romeo and Ethel is morphing into?

The largest part of Shakespeare in Love’s success rests with its script. The original idea had been doing the rounds in Hollywood for several years (Julia Roberts was determined to do it at one point, but only with Daniel Day-Lewis as Shakespeare, who was not interested). Marc Norman developed the concept and a plotline (originally much darker). But the film’s captivating wit and playfulness only really cemented itself when Tom Stoppard adapted the script into the frothy, super-smart comedy it became, crammed with riffs and gags about the Bard, Elizabethan theatre and show business. It’s also got a very funny – and humanising – idea of the world’s most famous writer suffering from writer’s block and then falling in love like he’s in one of his own plays. 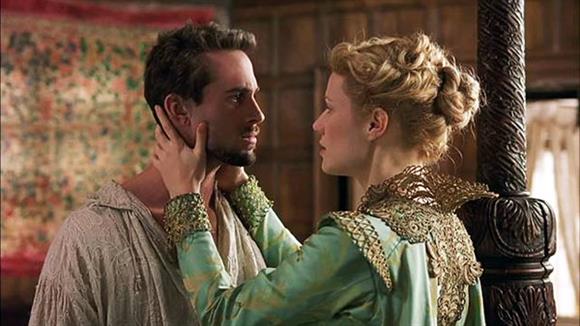 Stoppard’s other trick was to repackage the concept into a delightful romantic comedy, centring the love story and downplaying other elements (such as Shakespeare’s quest to go solo and build his theatre career). With that, and the plot brilliantly refracting and reflecting Romeo and Juliet in tone and structure (just like that play, the first half is pure comedy, the second half darker in tone). In particular, the film is crammed with Shakespearean plot points and themes (from cross-dressing to plays-within-plays, mistaken identities, ghosts etc etc) all of which playfully  appear, cramming the film with delightful easter eggs.

It’s a celebration of the joy and magic of theatre – but it also hit big in Hollywood, because it’s essentially a Hollywood-studio comedy transmuted into the 1590s. Henslowe feels like a chancing B-movie producer, in debt who feels that with the idea of promising a share of profits (“there never are any”) instead of a salary, that his financial backer “may have hit on something”. There are puns about the unimportance of writers, billing on posters, the neurosis of creative people (even including an Elizabethan psychiatrist), oversized production credits, forced “happy endings” and sticking to tried-and-tested formulas. Gags call back to show-biz staples (“The show must…” “Go on!”). While it may be set in a theatre, there is a lot of the Hollywood studio in this.

But, with Stoppard at the pen, it was never going to be anything other than a loving tribute to the power of theatre to change lives. Shakespeare’s Romeo and Juliet is presented as a landmark in theatre history, a shift towards putting real-life emotion on stage instead of a few cheeky laughs and “a bit with a dog”. There is a wonderful plotline for Tom Wilkinson’s at-first all-business moneylender Fennyman, who discovers in himself a sense of wonder and delight for the theatre that melts his heart. (Wilkinson is outstanding here, a brutal man turned teary-eyed spectator, thrilled to be playing the apothecary). It weaves its charms so well about the delights of theatre, that you’ll even forgive the cliché of the stammering actor who finds his confidence on the first night. You even get a belting performance of Romeo and Juliet (with all the dull bits removed).

What really sucks in audiences through is the love-story – and Shakespeare in Love has a belter of a romantic plot. Riffing on Twelfth Night, As You Like It and of course Romeo and Juliet among many others, it’s a delightful series of misunderstandings, confusions and then passion, that eventually builds to an ending that’s bittersweet but true. It’s also beautifully played by the actors. Joseph Fiennes is so good here, a masterful display of light comedy tinged with sadness, so quick and electric with inspiration that I’m still amazed he didn’t go onto to better things.

Paltrow’s teary Oscar-acceptance has rather blighted the memory of her performance, but she has an earnestness and innocence that is deeply endearing and brings with it a radiant intelligence and emotional maturity that sees her turn into a realist. Wisely, the film’s ending sheds the other, minor plots, to hone in on an ending that is both sad and hopeful, that reflects real life (Shakespeare was after all, a real man married to someone else in Stratford) and sets up a thematic idea of love and inspiration being a life-long romance, that touches every moment of our lives, even when the loved person themselves is far away. 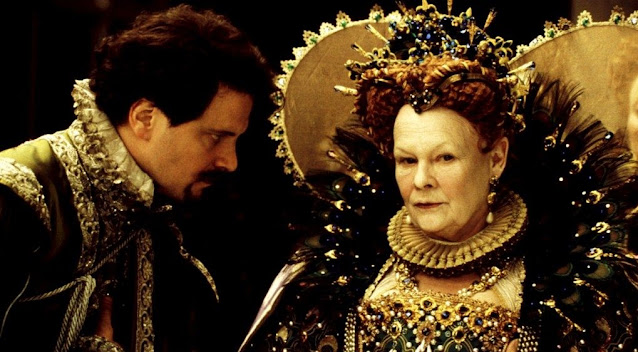 Directed with a smooth, professional sense of pace and joy by John Madden, it becomes a sweeping, surprisingly epic film, with a brilliant reconstruction of Elizabethan England and a luscious musical score by Stephen Warbeck heightening each scene’s emotional impact. The leads are marvellous, and there isn’t a weak-link in the strong cast. Judi Dench famously won an Oscar for her 8 minutes, but then its quality not quantity that matters and Dench’s archness is perfect for the role. Rush is hilarious as the grubby Henslowe, Affleck never better than his grand-actor parody, Colin Firth scowls expertly as “the other man” and Rupert Everett is dry and witty in a brief cameo as Christopher Marlowe, feeding Shakespeare suggestions.

You could say that Shakespeare in Love is just a romantic comedy. In many ways that would be fair. It doesn’t re-invent a genre, like Saving Private Ryan did. But, it’s a brilliantly mounted, intelligent and extremely funny one, with a superb script, some brilliant performances and wonderfully mounted. While it makes some good riffs on theatre, Shakespeare and the nature of love, it’s principle mission is to entertain – a big cinematic entertainment about the greatest playwright ever. And don’t we always say that comedy is exactly what the academy is biased against?