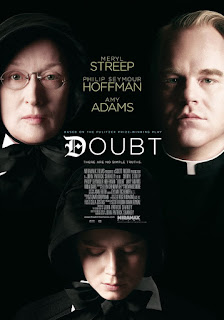 It’s 1964 in a Bronx Catholic School, run with an iron hand by Sister Aloysius (Meryl Streep). This arch-conservative is in the middle of an unspoken struggle with progressive reformer priest Father Brendan Flynn (Philip Seymour Hoffman), who doesn’t feel Catholicism has to be stern, unyielding and guilt-inducing. These tensions underlie Sister Aloysius’ concerns about Father Flynn’s closeness to the boys – in particular the school’s only black student, Donald Miller (Joseph Foster). When young and naïve Sister James (Amy Adams) reports that Donald returned from a meeting with Father Flynn with alcohol on his breath, Sister Aloysius is convinced Flynn is guilty of sexual misdemeanours – and makes it her mission to remove him from the school.

Adapted from a Tony-Award winning play, and directed by its author John Patrick Shanley, Doubt is an intense, well-staged, subtle opening-out of a four-hander, that works on screen due to Shanley’s flexibility with the material and the wonderful performances from the four principals. The story serves as a parable of sorts for clerical sex scandals, but ties this smartly into questions of faith and the limits of belief.

Because there are no clear answers in the film (or the play). We never know with cast-iron certainty if Father Flynn is guilty or not. All we have are his passionate denials, Sister Aloysius’ equally passionate certainty of his guilt, and a few moments we witness of his interaction with Donald Miller and the other students that are left open to interpretation. Tied into this as well, we have a very clear clash between modernisers and conservatives within the church – and we worry that, in being drawn towards the more sympathetic Flynn, we are in fact rooting for a sex-offender.

Doubt is a film that is likely to keep you questioning who you believe. I even found that repeat viewings can change your perspective on guilt or innocence – this time I was far more alarmed by Hoffman’s genial Father Flynn than I remembered (a lecture on clean nails he gives to the boys walks a wonderful line between hygiene and unsettling creep). Shanley’s expansion gives us more scenes of Flynn interacting with other priests. It’s clear the priesthood is a boisterous boys club, with jokes and drinking – much more fun than the staid, milk-drinking silence of the nuns’ meals – but this is also the clubbish pact of secrecy that let real-life paedophiles be quietly moved from parish to parish.

Sister Aloysius may be practically a poster-child for why people find religion off-putting, but she’s absolutely on-the-money in her determination to root out abuse. Yet while her determination to rid the church of abusers is genuine, does she really believe in Flynn’s guilt, or is it a prop she reaches for to justify her own dislike of him and his beliefs about the church? We’re never certain.

And that is part of the smartness of Shanley’s work. Because in the end all we have to go on is faith and our own belief. Which is pretty much like the whole of religion itself. There is enough in the film to convince you of the guilt or innocence of Flynn, the upright justice or corrupt selfishness of Aloysius. Their approaches to religion are radically different – Flynn sees it as their duty to be open and involve the community, to integrate their interests; to Aloysius the church only works if it is strict, austere and sets a moral example to all. A meeting between the two of them is a masterclass in micro-aggressions over everything from choice of chairs, pouring of tea, serving of sugar, closing blinds, you name it. 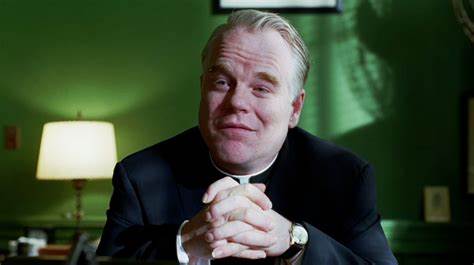 This is the trace of theatre in the piece – and theatre is when it is at is strongest. Shanley’s direction is largely unfussy, although he is prone to overuse Dutch angles to hammer home the uncertainty and to overplay a metaphor of the wind (a storm is coming you know!). But when he avoids too much fuss, the film is very effective. The opening up of the play works very well, with most of the additional characters (be they added nuns, parishioners or children in the school) largely used as silent extras that help to create a wider world as well as adding more reaction shots that help us build up even more our questions and doubts about the versions of a story we are hearing..

And the added question over this is the identity of the victim. As the only black child in the school, does his dependence on Flynn come from Donald’s sense of isolation? Is he vulnerable because of bullying and simply in need of the genuine kindness of a substitute father figure, in place of the bullying and violent father he actually has? Or does this isolation make him the perfect target for a predator? Most daringly, Foster’s mother (brilliantly played by Viola Davis in a single extended scene) when confronted with the possibility of abuse by Sister Aloysius even suggests that abuse might be price worth paying for the opportunities being at the school will give her son, the sort of opportunities his parents never dreamed of. Race is a low-key note, but it’s there.

Doubt’s real strengths are in the acting. All four of the principals were Oscar-nominated. Streep was the obvious choice as Sister Aloysius and she delivers one of her finest performances. Aloysius is stern, unbending, dangerously, even recklessly certain of herself and her faith in herself as a force of justice – but believes she is acting for the best motives (or at least is very vocal that she is, rather that is actually true is a whole other question). Streep adds wit (this is after all a woman who views ballpoint pens as the end of civilisation), but also understanding of the vulnerabilities under Aloysius’ rigid conservatism. It’s an outstanding performance.

Amy Adams is charmingly sweet and endearing as a woman caught between two poles, naturally inclined to Flynn’s liberalism and desire to win hearts as well as minds – but also open to using Aloysius’s tactics in the classroom in her struggle to maintain order. Sharply divided, Adams leaves it open whether her desire to see the best in people make her either saint-like or a rube. Hoffman walks an extraordinarily difficult tight-rope as a character both engagingly warm but also (by necessity) unknowable and unreadable. It’s a performance bursting with emotion, but which skilfully disguises that emotion’s motivations. Davis offers a master-class of restrained anxiety, using every ounce of control to keep her difficult life together.

Doubt is a thought-provoking and well-handled staging of a very-good play. Brilliantly acted, it expands the staging of the play but never loses sight of what makes it effective to start with: and will leave you thinking over small moments and as uncertain about truth and prejudice as Sister Aloysius is at its conclusion.