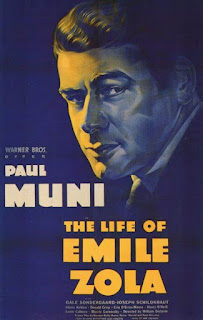 One of the lesser-known Best Picture winners, The Life of Emile Zola is a prime example of the 1930s trend for “Great Man” pictures, setting the template for a whole genre of biographical movies. A whistle-stop tour of how the Great Man came to be, before a tight focus on what made him great – ideally ending in either triumph or disaster (or, as is the case here, with both). It’s from a time when the viewing public didn’t expect a rigid adherence to the fact – and when films were very open with their flexibility with the truth (the film opens with an on-screen caption which happily states most of what happens in it is made up.) Actually, I think being told from the start you are watching a heavily fictionalised version of the truth covers a multitude of sins: and that The Life of Emile Zola is pretty entertaining when you get past that.

Emile Zole (Paul Muni) is of course one of the most famous French authors. But he was also at least as famous for his campaigning and presence as he was for his volumes and volumes of best sellers. The film follows Zola, for its first forty minutes or so, from poverty-stricken writer, struggling to make ends meet in the draughty hovel he shares with similar future-genius Cezanne, to success (although in real life by the time he wrote Nana, the book that makes him a sensation here, he was already hugely famous). Zola becomes increasingly aimless. What worlds are there left to be conquered? That all changes when Lucie (Gale Sondergaard) the wife of army officer Alfred Dreyfus (Joseph Schildkraut) asks for his help to save his life from unjust imprisonment and exile on Devil’s Island. Because the army are convinced Dreyfus is a spy – and won’t let inconvenient things like evidence that someone else did it get in the way.

The film is called The Life of Emile Zola but really it might as well have been called The Dreyfus Affair. This infamous miscarriage of justice drives the entire second half of the movie – with Zola himself disappearing from focus for stretches as the film covers the conspiracies that led to Dreyfuss spending the best part of a decade imprisoned for something he didn’t do. What seems strange today is that the film makes no mention of the most famous angle of the case: Dreyfus was almost solely suspected because he was Jewish, and the case became one of the most infamous antisemitic persecutions in history. But the studio heads – Jewish themselves and nervous of being accused of making a film that criticised Nazi Germany – removed all reference to Dreyfus’ Jewishness from the script. It’s a curious omission, but by and large doesn’t affect the film’s final impact.

Dieterle’s movie is also one of the first courtroom dramas. A large chunk of the final third is given over to Zola’s trial for libel (after his famous J’Accuse article, denouncing the army’s persecution of Dreyfus). In a crowded courtroom, the film carefully follows the intricacies of the court case, from calling to witnesses to final speeches (all fairly accurate, even if Zola is given a larger role with a final speech). As in the trial itself, the blatant unfairness (witnesses shouted down, defence questions vetoed, evidence withheld and even invented) is hammered home with shocking regularity. Donald Crisp does fine work as the liberal lawyer, hamstrung by a crooked system.

The Dreyfus affair element is really what makes the film come to life. The French army officers are almost to a man a group of corrupt bullies, who have pre-decided the outcome of their investigation and are determined that every single element of it should support that decision. By contrast Joseph Schildkraut (winning an Oscar that feels more for Dreyfus than him, delivering an effective if rather one-note performance) is the soul of decency and nobility as a Dreyfus who is at first bewildered then fighting a manful struggle against despair. Even better is Gale Sondergaard, who gets an ahistorical impassioned speech to win Zola to the cause and carries a core of quiet anger under her shock.

The Dreyfus Affair was the struggle of Zola’s life, the crusade that would win him a place in history, perhaps even more than his books. It’s also the sort of campaigning material that gives rich rewards to actors. Paul Muni seizes the opportunity. The film was shot in reverse so Muni would need to spend less and less time in make-up as shooting went on: the old-age make-up and wigs are very effective, matched by Muni’s physicality and voice which subtly changes as the character ages.

Muni is an actor who seized any chance for a bit of grandstanding. The film gives him its best one with a five-minute monologue closing the trial, during which Zola argues with passionate but quiet reasonableness that Dreyfus is an innocent victim. It’s even more effective since Dieterle has kept Muni silently off-centre for much of the court case. Muni sometimes carries the whiff of stagey ham, but in several moments he brings both a charming cheek and strong morality to Zola. It’s a very strong performance from one of the leading actors of the 1930s.

The film itself is also a good mixture of the twee and the compelling. Most of the Dreyfuss material falls into the latter category. It’s the early days of Zola that falls into twee: Zola scrippling ideas, bantering with Cezanne on the purpose of art, playfully mining prostitute Nana for the material he will make into a hit book. There is a nice foreshadowing through the film with Zola’s obsession with blocking draughts – an obsession that will later cost him his life to a misfunctioning heater.

It’s a well directed film. Dieterle mixes in nice touches of humour (a husband and wife using subterfuge to disguise from each other that they are both buying Nana) and also effective details that speak of Dreyfus’ isolation (the letter that has been redacated into nothingness, the effective transition of several years at Devil’s Island that stresses how little has changed, Dreyfus’ giddy joy when finally allowed to walk unheeded in and out of his prison cell).

The Life of Emile Zola looks today like a surprising winner of Best Picture. But the patterns for both courtroom drama and many biographical dramas were laid down here. By the end, as the survivors pay tribute to Zola with high-blown speeches, the audience should be convinced that this was a man deserving of being honoured by a whole movie. It’s setting of a template copied many times over can make it look a little twee today, but its’ still well done, with some powerful flashes of effective film-making and great acting.