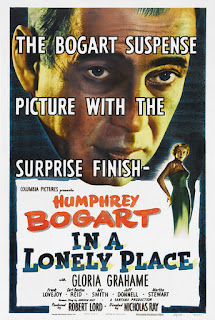 Hollywood: it’s a dark town. When movie makers turn their lens on themselves you’ve just as likely to see the dark underside of showbusiness, as you have a celebration. In a Lonely Place was made in the same year as Sunset Boulevard, and it’s even darker and less hopeful than that movie. It focuses on a person with a certain level of kudos, that has led others to overlook his deep personal flaws. In a Lonely Place reveals itself as a quite ahead of its time in its unflinching look at why people find themselves drawn into potentially abusive, controlling relationships with people who talk endlessly about how much they love you even while they try and control every aspect of your life. Overlooked at the time, it’s seen more and more as a classic.

Dixon Steele (Humphrey Bogart) is a successful screenwriter but has gone a few years since his list hit. Hired to adapt a plot-boiler he’s so contemptuous of the synopsis he invites a waitress at his favourite restaurant, Mildred (Martha Atkinson), to his flat one night to describe the story to him. Becoming as bored with her as he is with the cliched plot, he sends her home. When she is murdered later that night, Dixon is number 1 suspect. He’s alibied by his neighbour, aspiring actress Laurel Gray (Gloria Grahame) and the two start a relationship. But the pressure from the investigation and his writing assignments bring Dixon’s barely controlled rage more and more to the surface – with Laurel slowly fearing that he could be capable of anything if pushed to it.

It would be expected for a movie of this period – say something like Suspicion where of course Cary Grant is just misunderstood not a would-be killer – for all this to simmer and then resolve itself as a terrible series of errors (mostly of course from the woman). In a Lonely Place doesn’t do this. Instead, from the start we are given no reason to doubt Dixon’s capacity for near-murderous rage. Practically the first thing we see him do is assault a producer – albeit avenging an insult to an alcoholic actor friend. His first resort is violence. It’s something he’ll resort to time and time again, his capacity for anger joined with a self-pity that makes preemptive violence more likely.

It bleeds into the relationship with Laurel, which at first is all goodness and light. The two of them are well-suited, and an excellent tonic for each other: she’s a combination of muse and amanuensis, helping Dixon turn out his script; he opens doors in Hollywood she has spent years pushing against. But Dixon’s possessiveness, resentment and suspicion become clearer, accentuated by Laurel’s reserve and caution to emotional commitment. The relationship becomes tortured as Dixon resents any trace of suspicion against him, alternating with desperately possessive pleading for love. Any deviation from his idea of their relationship is seen by him as an act of betrayal.

Then there’s that temper. It’s there all the time, a sadistic streak that suggests a damaging lack of empathy. Dixon – while vaguely sorry for Martha’s death – is also perfectly happy discussing her demise with a clinical academic interest. He’s unphased by crime scene photos. He feels no guilt about not driving her home. Later, at the house of his friend (one of the detectives) he theorises how the crime was committed with an animation that turns into unsettling excitement. After a row with Laurel he drives a car (with both of them in it) with reckless fury and then nearly beats to death someone whose car he clips. Dixon follows these moments with futile half-apologies – anonymous flowers for Martha’s family, anonymous cheques to pay for car damages. But he never addresses his deep psychological problems.

This relationship becomes one ripe with the unspoken capacity for violence. Gloria Grahame is excellent as a careful, guarded woman who opens herself romantically, only to become terrified that the man in her life could just as easily kill her as kiss her. It’s a tension we feel too. Making breakfast, Dixon may talk about how they will be together always – but his vulnerable voice underlines his own doubts, and his furious insistence that they marry ASAP carries the capacity for fury if denied.

As Dixon, Humphrey Bogart gives one of (if not the) greatest performances of his career. Playing a character who, with his dark rages, allegedly had similarities with himself, his Dixon is a bleak figure. Capable of wit and charm, Bogart also makes him a cruel, seedy and sinister in his excitement at murder, while never preventing us finding him vulnerable and weak in his fear at being abandoned. But not sympathetic enough for us to worry he may end things by murdering Laurel. He’s never sympathetic – his late, motiveless, slapping around of his decent agent ends our chance of finding him that for good – but he’s understandable.

And he lives in a dysfunctional town. Where Hollywood intrudes on the action, Ray makes clear it is dark, unsettling, alien and unfriendly town – a truly lonely place. There are no confidantes or friends: only colleagues and potential rivals. You are only as good as your last credit: when your last few credits are poor, you’re no-one. On the other hand, rage and misbehaviour will be tolerated if you can produce the goods. It’s not a place for humanity or goodness.

Ray’s overlooked classic is a beautiful fusion of film noir and Hollywood insider movie. With superb performances from the two leads, it also feels way ahead of its time in looking at abusive relationships. Abusive partners don’t arrive twirling moustaches. They seem decent, loving and passionate – its only when you start to disappoint them they start to turn angry, controlling and abusive. By the time the film’s end come – and it’s a bleak one – you’ll be hard pressed to find some hope in it. But you will certainly find some great film-making.