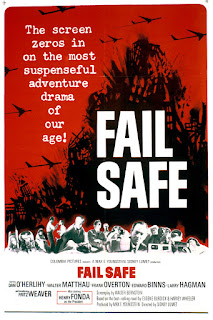 In 1964 the classic film on nuclear conflict was released and became a landmark in Hollywood history. Also released was Fail Safe. Dr Strangelove has dragged Fail Safe through history like a sort of shameful cousin. It’s reputation – if you’ve heard about it at all – is “Dr Strangelove but with no jokes”. That’s hugely harsh on a well-made, tense and fascinating film that sees nuclear war as less the blackly comedic theatre of MAD (Mutually Assured Destruction, the buzzword of the day), and more as a dark human tragedy where mistakes, suspicions and paranoia lead to disaster.

During a routine manoeuvre, a mechanical power surge at USAAF leads to a mistaken but correctly authenticated order being sent to a wing of bombers to drop their nukes on Moscow. Due to Russian jamming, USAAF has no idea this has happened until after the five minute recall window. After the five-minute window has passed, the pilots follow their training and ignore all subsequent orders no matter who gives them – even if it’s directly from the President (Henry Fonda) himself. Desperately the President works with the Soviet Union to stop the bombers (and prevent the inevitable full scale nuclear war they would provoke). Problem is national pride, mutual suspicion, subordinates who can’t stomach co-operation between enemies and those that an accidental first strike is the perfect way to start a nuclear war one side could win, keep getting in the way.

While Dr Strangelove saw the insanity of MAD – the willingness of the leaders of both sides to promote a type of war that could only lead to the destruction of all life on earth – as so darkly absurd it could only be a subject for jet-dark-satire, Fail Safe takes a more humane if equally chilling route. Shot mostly with a low-key documentary realism by Sidney Lumet, the action is restricted to no more than four main locations. Once the crisis starts we never go outside. We never even see the Russians, represented only by photos and their words given life by Presidential translator Larry Hagman. Bar from the odd piece of stock footage, we are in the bunkers with the characters. And we feel as powerless as they do, as events spin out of control.

The film could be seen as an attack on the replacement of humans from the system by machines. Sure, the strike is triggered by a faulty piece of equipment. But everything after that is the result of good old-fashioned human error. The US debate about shooting down the bombers that goes on for so long, the bombers get out of range. The Russian refusal to accept US help to shoot the bombers down, leading them to taking pot shots at radar ghosts. The attempted coups on both sides in the command room, as junior officers refuse to co-operate with the enemy. The mistrust between both sides that leads the Russians chasing a decoy attack run rather the real bombing plane, despite the pleading of the American General that it’s a decoy.

And above all, the crushing arrogant insanity of introducing a system like this in the first place. A system so regimented and drilled into its soldiers – removing any chance of independent logical thought – that the pilot of the bombers will even ignore his own wife pleading down the line that the first strike he believes he is retaliating against hasn’t even happened. A system where leading American advisors suggest that, because it’s so difficult to call back an attack like this, why not just launch everything else after it as well and claim victory. This system can destroy the world but has no leeway for human error and forbids any independent thought from anyone. Now that’s MAD. 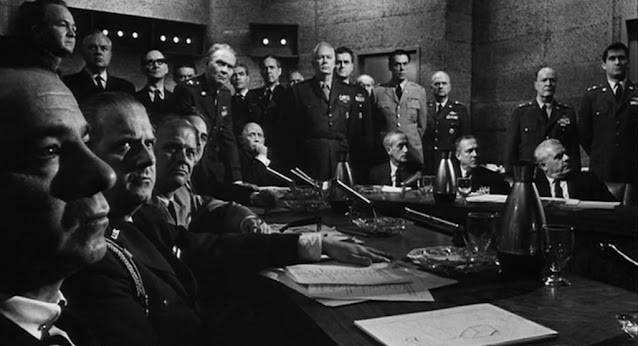 It takes a while for the film to get going, laying its groundwork slowly. Much of the first half hour introduces the characters – such as the family life of anti-Nuclear but loyal soldier General Black (a very good Dan O’Herlihy) and the chilling pragmatism of war theorist Professor Groeteschele (Walter Matthau) to whom nuclear war is just a matter of working out what the acceptable casualty rates are (he would agree with Stalin that one death is a tragedy, a million is a statistic). We tour the USAAF base where level-headed General Brogan (an excellent Frank Overton) and his twitchy number two Colonel Cascio (a slightly too fidgety Fritz Weaver) demonstrate just how fool-proof their systems are to a couple of congressmen – just as those systems fail.

From there the film plays out almost in real time, as the planes fly the two-hour journey to drop their bombs. Two hours when everyone tries to desperately tell themselves that this disaster can be prevented (or in some cases, can be turned into victory). Lumet’s film captures wonderfully the claustrophobic intensity of this. The Russians – despite never being seen – are skilfully humanised with snatches of conversation and photographs. The pilots are brave, resourceful, brilliantly trained – making their rigid determination to destroy the world for no reason (because their training doesn’t allow them to consider any other alternative) all the more tragic.

It all culminates in an impossibly bleak ending, the President’s only alternative to all-out nuclear war is one of terrifying magnitude. The inevitable build to this sacrifice is also executed with a low-key intensity. Fonda is perfect in the lead role – his tortured gravitas and decency pushing him towards ever more distasteful and finally appallingly bleak decisions.

Lumet’s film isn’t perfect – an overly impressionistic opening of General Black’s recurring dream of a matador smacks of someone who has watched way too many Bunuel films – and its slow start probably takes five minutes too long. But with its chillingly cold glaze on the flaws in the nuclear deterrent and the people who operate it, it deserves to be remembered as something more than Dr Strangelove Without the Jokes.