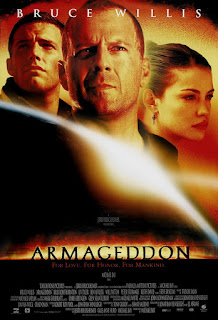 In Michael Bay’s space, no-one can hear you scream. But that’s only because it’s so damn loud up there. It's 1998’s other “asteroid is going to wipe out humanity” film, the one that came out after Deep Impact but grossed more. NASA recruits ace driller Harry Stamper (Bruce Willis) and his team (including Will Patton, Steve Buscemi, Michael Clarke Duncan and Owen Wilson) to fly up to an asteroid the size of Texas, drill a hole in it, drop a massive nuke in and blow it into two bits that will bypass the Earth. Will humanity be saved? And will the tensions ever be resolved between Harry, his protégé AJ (Ben Affleck), and Harry’s daughter Grace (Liv Tyler) who, much against her dad’s will, wants to marry AJ? Houston, we have a problem.

Armageddon is the ultimate expression of Michael Bay’s style. With the camera swooping and rotating wildly around characters on the move, the fast-editing, the assault on the ears, the green-yellow-blue hue, every shot and line of dialogue in Armageddon feels like it was made to be inserted into a trailer. It’s an overlong onslaught (nearly two and a half hours) which rarely goes ten minutes without a sequence that features explosions, furious shouting and frantic camera movements. Most of the action in Armageddon is incoherent and the film rather neatly replicates the experience of being actually hit by a meteor.

For many people this is a guilty pleasure. But there is very little pleasure to be had here. By trying so hard to top Deep Impact – a film he hadn’t even seen at this point – Bay dials everything beyond 11. So much so it becomes exhausting. Half the action sequences (of which there are many) are impossible to understand, such is the fast editing and the way all the dialogue is screamed by the actors at each other, all at once, drowned out by bangs and crashes. The only dialogue you can actually make out in the film is of the “The United States government asked us to save the world. Anybody wanna say no?” variety, built for slotting into a trailer before some more bangs.

In fact the whole film is basically a massive trailer for itself. It’s unrelenting and after a while not a lot of fun. I guess if you catch it in the right mood it might just work. Bay gives it everything he has in his arsenal. But even he can’t overcome performances from his actors that range from bored and unengaged (Willis and Buscemi both fall into this category) to over-played grasping at epic-status (Affleck and Tyler fall into this one). Billy Bob Thornton comes out best with a wry shrug, knowing the whole film is bonkers but going with the ride.

Anyway, it all charges about a great deal, even while it never knows when to stop. In every situation one crisis is never enough – it’s best to have three at once. Not only does someone need to stay behind, but the asteroid is breaking up and the shuttle won’t take off! What a to-do! The film is desperate to excite you, like a 7 year old who wants to share the BEST-THING-EVER with you and doesn’t draw breath while telling you every single detail.

Of course, scientifically the film is nonsense, but that hardly matters. How NASA can know the comet being blown in two will create two bits that will miss the Earth (rather than two impacts or a whole load of debris) is unclear. Timeline wise – particularly early on – the film makes no sense. But then who goes to Bay looking for a science lecture? It even opens with a ponderous Charlton Heston voiceover, all part of the straining for grandeur.

It's not even the best Bay film (that would surely be the far more enjoyable but equally overblown The Rock closely followed by the first Transformers film, the only one that doesn't make you feel soiled after watching it). Armageddon could be a guilty pleasure. But really it’s terrible. You should just feel guilty.