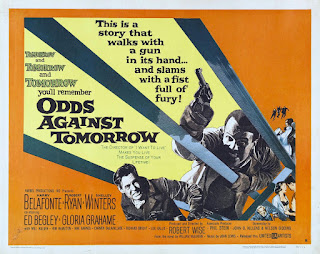 Johnny Ingram (Harry Belafonte) life is on the skids. His career as a singer isn’t bringing in the money to fuel his gambling addiction or help support his ex-wife. Owing money to gangsters, he’s roped into taking part in a bank heist master-minded by bitter ex-cop Dave Burke (Ed Begley). It should all go smoothly. Unfortunately, Burke has also recruited Earl Slater (Robert Ryan) as muscle – and Slater has channelled all his own insecurities and resentments into virulent racism. Can Johnny and Slater work together to make the heist work?

Wise’s picture – with a script by the black-listed Abraham Polonsky – is on paper a crime drama. But it’s really hardly interested in the heist (which is almost laughably simple) the planning of which doesn’t even start until the film is nearly an hour old. Instead, the focus is on putting together a neat parable for racial divide in America. Because if even criminals are more preoccupied with feuding over the question of the colour of each other’s skin than making a score, why on Earth should we be surprised that such problems arise in every walk of life?

Attitudes are mapped out early in the film, largely thanks to Wise’s crisply efficient story-telling. Ingram playfully tips off a group of mixed-race kids to watch his car; Slater singles out a black child from this same group with a smilingly delivered racial epitaph. In the building, they both have strikingly different conversations with a black elevator attendant. Its clear tensions will abound – not least because Slater won’t work a job with a black man and Ingram is rightly disgusted with him.

Belafonte produced the film and he plays a very different type of black American than most films had seen. Black characters frequently fell into being either noble or deferential. Johnny is neither. He’s angry, bitter, drinks and has no interest in compromise of any sort. Johnny is a deeply troubled man, who seems to be making a mess of his life. Above all he doesn’t rise above racial abuse or shrug it off, but angrily confronts it. Fundamentally he’s a chippy screw-up, but he always retains sympathy because we can see he’s really a decent guy, for all his faults.

He’s just not one who’s willing to play the white man’s game to get ahead. He’s quite clear with his wife (very effectively played by Kim Hamilton) that he’s not willing to simply conform with a structurally unfair world. He’s also quite clear with Slater that he doesn’t want to hear whimsical memories of the South during the ‘good old days’. Belafonte does all this with a great deal of energy, even if you feel he doesn’t quite have the range and power for the role.

It’s interesting though that the film finds plenty of room to explore Slater. Played with a fragile self-loathing by Robert Ryan (one of Hollywood’s great liberals, whose career was made up of characters who persecuted minorities), Slater is deeply unsettled and insecure. He’s struggling to adjust to a more modern world where the man isn’t always the hunter-gatherer, and his wife (a rather sweet Shelley Winters) has the fixed job he can’t get. He doesn’t understand the world anymore.

All this makes Slater vulnerable, confused and even a bit pitiable – all qualities Ryan effortlessly brings out in the film’s finest performance – stumbling into bar fights where he responds with far too much violence. His face constantly seems to crumble into something a little like tears. He engages in a brief fling with a flirtatious neighbour (a blowsy Gloria Grahame) simply, it seems, to try and feel better about himself. The only thing that give him strength, it seems, is turning Johnny and all other black people into an alien “other” which he can lambast and attack.

This of course leads to barely concealed tensions during the robbery planning – where Slater repeatedly states he doesn’t trust Johnny to complete anything – and then during the robbery itself when the fundamental distrust between these two leads to a shoot-out and disaster. Caught in the middle, in a polished performance, is Ed Begley’s Burke, lacking the force of character to make this odd couple work together.

Wise’s film sometimes make some obvious choices – after the final climactic shoot-out, a policeman comments “which is which”, which is about as “under the skin we’re all the same” as you can get. But it’s told with a leanness and pace and by focusing on social issues rather than crime, it presents an intriguing snapshot of American attitudes. The vast majority of characters don’t share Slater’s kneejerk racism – but they also don’t even think of challenging it. No wonder Johnny Ingram’s so annoyed – and no wonder he sees that, for all the smiles, it’s a world run by and for the white man where your only chance of success is conform and shut up. Maybe the odds are against tomorrow.