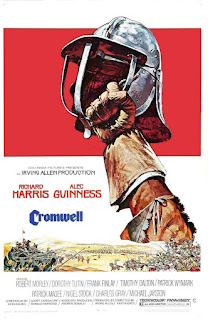 How much does history actually matter when you watch a historical film? We all know we aren’t watching a documentary don’t we? It’s worth bearing in mind when watching Cromwell a film which would probably be in the running for “least historically accurate film of all time”. But despite that, it’s entertaining and gets quite close to some of the spirit of the times – even if it changes most of the facts. It probably as well deserves notice for being one of the very few films to offer a sympathetic portrait of Oliver Cromwell – not a guy it’s easy to like.

It’s the 1640s, and England is a mess. Charles I (Alec Guinness) has been ruling the country directly, without involving Parliament, for over ten years. But now the money is gone and he needs Parliament to raise some more cash. Problem is, Parliament is more interested in pushing a defence of its own prerogatives rather than simply putting more money into the King’s pocket. Among the leaders of the Parliamentary campaign is Oliver Cromwell (Richard Harris), and he is not the man to take any false promises from the king. Before we know it, the country has tipped into civil war – and now it’s up to Cromwell to create a Parliamentarian army that is capable of defeating the King and bring democracy to the nation.

Ken Hughes film offers some plenty of scope and drama, even if is old-fashioned (even a little Victorian) in its Wrong-but-Wromantic Cavaliers and Right-but-Repulsive Roundheads (to mis-quote 1066 And All That). It’s a strange topic for a historical epic (it took years to get the funding) – but it looks fabulous and has a wonderful score that really embraces the religious music of the time.

What it gets right is the passion and the fire that people felt at the time for questions of politics and religion. The film frequently features heated debates (even if the dialogue is often more ticking boxes than inspired) that the actors invest with real force. Its view of events is of course truncated and at times simple (it is, after all, trying to cover around ten of the most tumultuous years in British history in about two hours), but it focuses on trying to get the spirit of things right.

A large part of this is Richard Harris’ firey performance in the lead role. There is, it has to be said, a cosmic irony in Cromwell, the least popular British leader in Irish history, winds up being played so sympathetically by one of the most famous Irish actors of all time. Sure, the real Cromwell would have hated being played by an Irishman and a Catholic (Cromwell was surprisingly inclusive at the time, but had no truck with either group). But then Cromwell would also have loved being portrayed as a mixture of George Washington and Cincinnatus (the Roman general who left his plough to assume supreme command when the nation needed him, only to retire again to obscurity). This Cromwell is bullheaded, but determined to do what’s best for the nation, with personal ambition not even a consideration. He’s the one true, selfless man in a revolution of violence.

In fact, Cromwell was sorely tempted by the eventual offer to be King (something he laughs off here). He also undoubtedly was touched heavily by ambition, while his attempt to turn the Protectorate into a hereditary office was a disaster that doomed the Republic (surely George Washington learned a few lessons from him). But, deep down, Cromwell was sincere – a guy who largely said, and did, what he meant. It’s that sense of morality that Harris gets very well here. And, while its easy to poke fun at those hoarse tirades Harris is frequently called on to deliver, this sort of intemperate ranting (laced with Biblical language and a strong sense of moral superiority) were pretty much central to Cromwell’s personality.

It makes for a very different hero, even if the film is determined to turn Cromwell into the only decent man in the Kingdom. Cromwell, in real life, never retreated from politics to return to his farm as he does in the latter part of the film (he actually spent this time on brutal campaign in Ireland, something the film mentions only vaguely in passing). But there is no doubt Cromwell would have believed he was the guy selected by providence to save the nation – and that idea the film channels very well. In fact, Cromwell gives you a pretty decent idea of what Cromwell might have been like – and a pretty accurate picture of who Cromwell wanted to be – even if the things it shows you only have a passing resemblance to what happened. 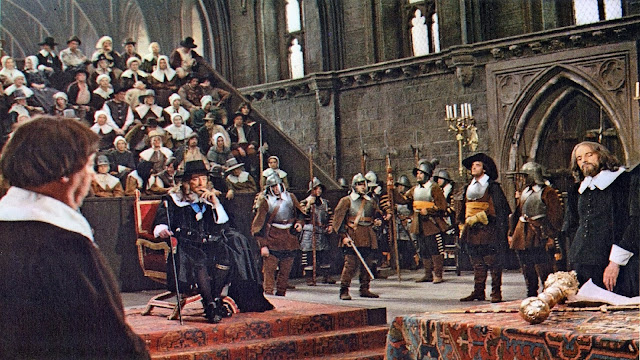 It’s a key directive throughout Ken Hughes’ film, which feels free to distort historical events willy-nilly (see more below). But there is a sort of truth in spirit, if not in fact – from the heated debate in Parliament, to the mixture of frantic panic and regimented order in the battles (one particularly good shot positions the camera under a charging horse, which makes a cavalry charge suddenly feel horrifyingly visceral). Sure it’s arranged into a much more simple black-and-white story, but it works.

A similar trick also works for its portrayal of Charles I. This is probably one of Guinness’ most over-looked performances. His Charles is a weak, indecisive man who confuses stubbornness and pride for moral strength. Softly spoken when calm, he collapses into heavily Scots accented rage when riled and his politeness is a only a shield for bitterness and vexation. He routinely shirks responsibility for his actions and spreads the blame around everyone but himself. Again, it might not all be accurate, but you can’t imagine this is far off from the actual King.

Historically though, so much of the film is wildly inaccurate. Many of these changes are done to increase the importance of Oliver Cromwell early in the Parliamentarian campaign. To scratch the surface: Cromwell – a minor figure until quite late into the war – was not one of the five members Charles marched to Parliament to arrest (neither was Henry Ireton). He certainly didn’t – and neither did anyone else – remain sitting when the troops arrived and set a motion in place protecting MPs. He never met the King before the war. Cromwell is later made C-in-C of the Parliamentarian army – an office actually given to Fairfax. The film’s depiction of the Battle of Naseby flips the numerical advantage exactly to favour Charles rather than Cromwell. Far from providing the key damning evidence at Charles’ trial, Hyde fled the country with Prince Charles.

But this is a fiction, rather than drama. Even if the facts it presents are largely nonsense, it gets a lovely sense of the divided loyalties and tensions that existed during this period. The performances are often quite broad – Robert Morley simpers and sneers as an opportunistic Manchester, Patrick Wymark growls and splutters as Strafford while Timothy Dalton goes way over the top as a foppish Prince Rupert – but some, such as Michael Jayston’s firebrand Ireton or Nigel Stock’s tortured Hyde (historical nonsense as his storyline is) are rather good.

And it’s hard not to like a film where the lead actor is going at it such great guns that you can actually hear his voice disappearing into a rasp. Cromwell doesn’t have much relation to the facts, but deep down it does seem to understand the man Cromwell wanted to be. And, on that level, it feels truthful and heartfelt – and that’s partly why it remains entertaining and why I remain rather fond of it.