David Lean’s film career can be divided into two eras: his early films are British-based literary adaptations and family dramas, many of them front-and-centring the experiences and tribulations of women. The later era are the jaw-dropping epics he became best known for. The Sound Barrier is towards the end of the first era – and it’s almost a bridge between the two, an impressively filmed story of man’s triumph over nature, that sneaks under the wire an emotional family-in-crisis storyline, with a daughter suffering the damaging impact of her father’s obsession.

That father is John Ridgefield (Ralph Richardson), a famous aeronautical engineer and airline entrepreneur who, with the end of the war, returns to his fixation: discovering a way to make a plane fly so fast it breaks the sound barrier. It’s a vision that has dominated his life, but which his daughter Susan (Ann Todd) finds hard to understand. John is a domineering, demanding father, whose son Christopher (Denholm Elliott) gets himself killed trying to qualify as a pilot to win his father’s respect. In his place, Susan’s husband Tony (Nigel Patrick), a test pilot, is claimed by John as a surrogate son and equally pushed to risk all to try and fly faster than sound.

Lean’s film is a wonderful mix of post-war military-based exploits and stiff-upper lip exploration of family dynamics, where resentments and passions go unspoken but shape everything. With a superb script by Terence Rattigan, whose work is filled with monomaniacs like Ridgefield and sympathetic and emotionally intelligent women like Susan, The Sound Barrier might seem like a celebration of British pluck (it hardly matters that we Brits didn’t actually break the sound barrier first – no mention of Chuck Yaeger here…), with some stunning aerial photography. But it’s a lot more than that.

What’s fascinating about The Sound Barrier – and what makes it such a rewarding watch – is how much it questions the value of these sort of quests. The film’s focus is less on the engineering struggles and the bravery of the pilots (compare and contrast this film with the more straightforwardly triumphant The Dam Busters), and more on the human cost of obsession and this sort of adrenalin-fuelled airborne machismo.

The Ridgefield family has been damaged almost beyond repair – under their wealth and comfort – by their father’s demanding perfectionism. Ralph Richardson is superb as this bluntly-spoken man who sees no reason to sugar coat anything or hide any disappointment. The character has more than a hint of a Gradgrind of engineering – and just like Hard Times patriarch, his well-intentioned but misguided parenting has distorted both his children. 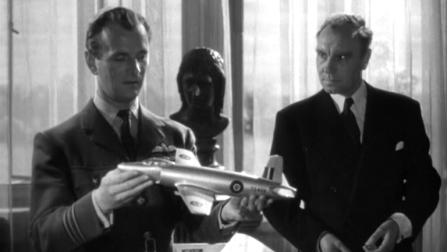 His hero-worshipping son Christopher (a wonderfully fragile and charming Denholm Elliott) pushes himself through chronic air-sickness to lay down his life trying to follow in his father’s footsteps (John greets his death with a sad criticism of his flying skills and goes back to work with his jet-plane models straight after the funeral). Susan has a cold relationship with her father (strikingly she calls him Father while everyone else – even her husband Tony – calls him Dad), and can’t understand why all this goal is worth sacrificing lives and any chance of simple domestic happiness. Her father’s coldness and distance from his children – not to mention his obvious and continual disappointment that she was born a girl – has led her to treat him with respect but not love.

It’s a dynamic completely missed by her husband Tony, played here with a bluff simplicity by Nigel Patrick. But then it’s pretty clear that this risk-taking pilot is quite simply not that bright. His lack of independent thinking is even identified by engineer Will Sparks (a ‘sparkling’ performance of avuncular surrogate fatherdom by Joseph Tomelty) as his major weakness as a test pilot. Tony has no idea of his wife’s concerns or emotional problems with her father, and instead quickly gets sucked into filling the role of “son I never had” for John. But then Tony has everything John wants – the flying skills Christopher never had without the questioning independence of Susan. He’s exactly the sort of weak-willed would-be-hero who can be quickly sucked into taking huge risks.

The film’s sympathies though are with Susan, played with a real warmth tinged with a sad expectation for disaster by Ann Todd, whose presence slowly grows to dominate the film. She can’t understand why it is necessary to risk all for this nebulous goal: it’s a refrain she repeats throughout the film “I wish I knew, I really wish I knew”. We’ve just gone through a second calamitous war – why are we throwing our lives away for a concept? Why should her husband put himself at huge risk like this for a brief mention in the history books and nothing else? Why not be content with a happy family life and living to see his son? Not to mention that the film proves her right – the nice-but-dim Tony isn’t good test pilot material and Susan’s new family is destroyed just like her old one.

At first it might seem that Todd’s character is the stay-at-home “don’t go Darling” type, but the film increasingly shows the validity of her doubts. There is a slightly toxic “carry on” Englishness about Tony and her father. Obsession is shown to drive out all over considerations – and Richardson has a late scene that carefully but brilliantly demonstrates how it has left him isolated and alone. It’s telling the barrier is finally broken by devoted husband and father Philip (a very decent John Justin), who is aware of the danger and has the most settled family life of the lot (and who greets his triumph with tears of relief rather than cheers).

The Sound Barrier could have easily been a “Britain triumphs in the skies!” with soaring music and heroic filming. Instead, it demonstrates the danger of obsession and the damaging impact it can have on people and their families. It concentrates not on the men in the sky, but increasingly the potential widows on the ground, forced to acknowledge that life with the family is less important than the chance of glory. It’s a rich and emotionally intelligent film, very well directed by Lean with warmth and humanity and with three terrific actors leading from the front.