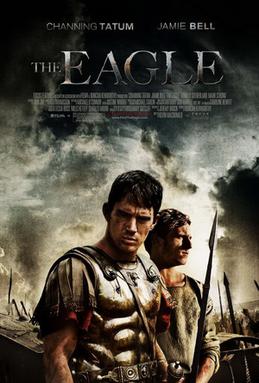 Rosemary Sutcliff’s The Eagle is one of the classic young adult stories of all time. An enjoyable odd-couple-turned-brothers-in-arms series, with plenty of action and adventure it arrives on screen as a dark, gloomy and above all not-really-fun-at-all story that doesn’t seem to know whether it’s aiming for a boys-own yarn or an adult adventure. It basically fails to make either work.

In Roman Britain AD 140, Marcus Flavius Aquila (Channing Tatum) is a young centurion whose father was one of the commanders of the Ninth Legion, which disappeared twenty years before somewhere in the North. Now Marcus is working to save his family honour – but his career as a centurion is cut short after he is injured almost single-handedly saving his garrison from attack. Depressed, he resolves to head north to try and find his father’s legion’s missing eagle standard – accompanied only by his strong-willed slave Esca (Jamie Bell), who hates Rome but owes his life to Marcus who saved him from execution in the gladiatorial ring. Heading North they find the eagle is in the hands of a savage tribe of warriors, who take no quarter.

Kevin Macdonald’s film probably should work like a Bernard Cornwell novel remixed in Roman Britain – or, better yet, like a proto-Simon Scarrow novel. There should be a growing sense of odd-couple bond – or at least chemistry – between Marcus and Esca as unlikely allies who become even more unlikely friends. Sadly, Macdonald misjudges the mood and instead turns the film into a grimly serious, mud spattered and miserable travel saga, which slowly drains any sense of enjoyment out of the story and its mission.

Instead, Esca and Marcus seem to hate each other’s guts for most of then movie until the plot finally absolutely demands that they lay down their lives for each other – at which point, an unearned switch takes part. Rather than an amusing “opposites attract”, men on a mission banter that the film sort of needs, instead everything is morose, angry and very, very serious. By the time the film hits the sort of banter tone it needed at the start, the credits start to roll.

It’s not helped by the choices of the two lead actors. Tatum is at his most “serious” here, with none of the playfulness and lightness that can make him an engaging presence. Instead he’s muscle bound and frowning, dispatching enemies without a second thought and forever gloomily reflecting on his father’s lost honour. Bell gets the tone slightly more on point, but he’s given almost nothing light to work with, instead having to juggle guilt and resentment at the oppression his people face and his part in it. With the dreary photography, all this misery finally starts to wear the viewer down.

Where’s the enjoyment of all this adventure? I get the film wants to make a serious point about the cost of empire and conquest, but did that have to be at the cost of any sense of fun? At least the film does take an interesting decision to make all the Romans American – reflecting the fact that America is “the new Rome” – but it doesn’t really take these revelations anywhere.

Not that you would really want it too as this is supposed to be an adventure story. Instead it’s a gloomy trip of two angry people in extreme cold and mud to grab a metal eagle, punctured by darkly framed fights, dully assembled dialogue scenes and a bubbling dislike between the two lead characters that never flowers into respect until far too late. By making neither of the two lead characters particularly likeable, we never really invest in their journey – and in the end just plain don’t care about what happens to them or if they ever get that eagle at all. For an adventure story, this is one trip you’ll insist you’d rather stay at home and guard the base.