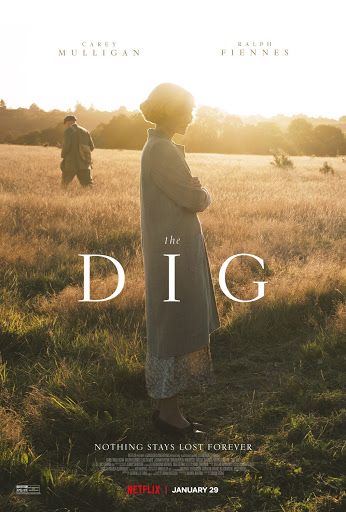 One of the greatest archaeological finds in British History, the Anglo-Saxon burial ship in Sutton Hoo revealed vast treasures and cultural insights that are very rarely glimpsed. Land-owner Edith Pretty (Carey Mulligan), a widow with a young son Robert (Archie Barnes), hires self-taught excavator Basil Brown (Ralph Fiennes) to investigate the curious mounds on her land. Brown discovers one of them holds the buried ship. But the dig is taken from his control by the British Museum, led by Charlie Phillips (Ken Stott): professional archaeologists who want to ensure the work is ‘done properly’. With tensions of class and profession, everyone must race against time to complete as much of the work as possible before the outbreak of the Second World War.

On the surface, The Dig is a charming, heart-felt reconstruction of a fascinating moment of archaeological history, mixed with engaging (but familiar) stories of a working-class amateurs being patronised by upper-class professionals. However, Stone’s film manages to have a richer second layer. With war approaching, and mortality constantly on the mind of most of the characters, it’s also a subtle investigation of legacy, the past and death itself.

Stone’s film develops this with its rich, poetic filming style. Beautifully shot in a series of gorgeous hazy hues, with dynamic use of low-angles and wide-angle lenses, Sutton Hoo is given an almost mystical beauty. Stone also makes extensive use of playing dialogue over images not of the conversation, but smaller moments in character’s lives, from casual meetings to cleaning shoes, that as such take on a profounder meaning. It’s a visual representation of how our legacy is often a snapshot of images and relics, moments that stay in the memory even when events (or conversation in this case) has moved on. It’s subtly done, but carries a beautiful impact.

Then of course, it’s not surprising legacy in on the mind. Each of the characters is at a tipping point in their own lives. Edith Pretty – so consumed with quiet grief over the loss of her husband that she is desperate for there to be something on the other side – is struggling with her own health, aware she will shortly leave her son an orphan. Her cousin Rory prepares for service in the RAF – service she fears will shortly leave him dead (the dangers of the airforce are clearly shown when a trainee pilot crashes and drowns near to the dig).

This connection to the briefness and intangibility of life pushes people to address their own choices. After all they are all standing in the grave of a man considered so important at that the time, a ship was dragged several miles to honour him – and today we have no idea who he was. Married archaeologist couple Stuart and Peggy Piggott confront an amiable loveless marriage (he’s gay, she’s falling in love with Rory) that shouldn’t define their lives. Basil has dealt with quiet grief at a childless marriage, and sees his work in astronomy and archaeology as his legacy.

These ideas are gently, but expertly, threaded together with a reconstruction of the key issues around the dig. Needless to say, the academics – led by Ken Stott at his most pompous – have no time for Basil’s home-spun methods. Basil’s predictions of the Anglo-Saxon tomb are constantly dismissed until he literally digs the ship up. Immediately he is benched to clearing soil (and only on Edith’s insistence is he allowed to remain at all) and later his name will be scrubbed out of the official record. It’s always the way with Britain – and a sign of how tenuous our legacies can be.

The personal stories are not always as well explored. The film has its flaws, not least the sad miscasting of Carey Mulligan as Edith. In reality, Edith was in her mid-50s when the ship was discovered. The film was developed for Nicole Kidman, but with her withdrawal Mulligan (twenty years too young) was drafted in. Sadly, nothing was changed to reflect this: meaning the characters years of spinsterhood before marriage lose impact (seriously how old can she have been when she married? She’s got a 12 year old son!). A softly underplayed romantic interest between Edith and Basil is also rather unsettling considering the vast age difference between them. (It’s better to imagine it as a platonic bond).

It’s still more engaging than the rather awkward love triangle the film introduces late on between the married Piggotts and Edith’s (fictional) cousin Rory. It’s fairly familiar stuff – the closeted gay Piggott, the growing realisation of this by Peggy and the obvious charm and gentle interest of Rory – and more or less pans out as you might expect, although at least with a dollop of human kindness.

The film’s other delight is the acting. Ralph Fiennes is superb as the taciturn Basil, a dedicated self-taught man who knows what he is worth, but struggles to gain that recognition. Fiennes not only has excellent chemistry with Mulligan and Barnes, he also suggests a quiet regret in Basil as well as a fundamental decency tinged with pride. For all that she is miscast, Mulligan does very good work as Edith while Chaplin, James and Flynn make a lot of some slightly uninspired material.

The Dig is at its best when asking quiet and gentle questions about life and when it focuses on the platonic romance between Basil and Edith. Directed with a poetic assurance by Simon Stone, it doesn’t push its points too far and gets a good balance between fascinating historic reconstruction and more profound questions of mortality.