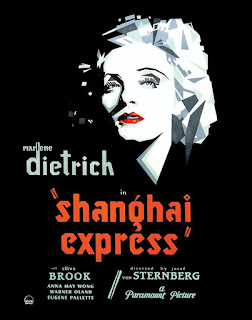 The fourth collaboration between von Sternberg and Dietrich, completed when they were in the middle of – was it an affair, an infatuation or something half-way between obsession and resentment? Who knows. Either way, Shanghai Express is one of the their finest collaborations, a triumph of von Sternberg’s mastery of style and Dietrich’s charisma and appeal, brilliantly shot with some iconic images. The biggest hit of 1932, it’s also a loopy part-thriller, part-romance but with a sort of eerie dream-like logic and that mixes peril and jaunt. It’s a fascinating picture.

Its 1931 and China is in the middle of a civil war. Boarding a train bound for – you guessed it – Shanghai, is a veritable smorgasbord of ex-pats and mysterious travellers. First among them – and reviled by all but one of the other passengers – is infamous “coaster” ‘Shanghai Lily’ (Marlene Dietrich), a woman who (as she says) needed to go through more than one man to get that nickname. The only person in first class who can stand her is Chinese “coaster” Hui Fri (Anna May Wong). The man who has the most cause to resent her though is army physician Captain Donald Harvey (Clive Brook). The two of them were deeply in love, but misunderstandings came between them and he’s nursed a grudge ever since. The rest of the train carry their own petty prejudices – but all these are put in perspective when the train is hijacked by rebel leader General Chang (Warner Orland), who holds Donald hostage to get the release of his right-hand man from the Chinese. What will Shanghai Lili aka Madeline do to save the life of the love of her life?

Clocking in at a slim and efficient 82 minutes, Shanghai Express still manages to have a languid, patient pace to it, taking its time to establish places, relationships and stakes. Part of that also comes from the film being set in a sort of imaginarium idea of China, born entirely out of von Sternberg’s brain. With his long-standing disinterest in realism, von Sternberg’s film is a sort of fever-dream image of China. So it’s kind of fitting the film plays out like a dream, right down to its own pace. At times it rushes swiftly on, at others the stakes hardly seem to matter as the characters move freely around while in supposed captivity and barely consider their lives at risk. At the end of the film, the train arrives (despite the violence en route, the fact its late gets the most comment) and the characters simply get on with their lives.

Perhaps its all part of von Sternberg’s deconstruction of these Europeans and Yanks, whose only engagement with this foreign country is that it should be made as much like the West as possible. Most of the characters on board – with the exception of the women – are selfish, pompous, lecherous, prejudiced, greedy or some combination of all of the above. While they wear an air of respectability, it doesn’t take long to shake them from it. And their judgement of others is swift and irreversible. Even Donald, our nominal hero, fits this bill – he frequently rushes to judgement and pig-headedly sticks there, regardless of logic and experience.

In among this, it’s the women who emerge as the only characters who demonstrate pluck, loyalty, empathy and decency. Anna May Wong’s looked-down-on courtesan goes through a torrid time – demeaned on the train then assaulted by the lecherous Chang not once but twice (the second time an off-screen rape that none of the Western characters ever feel the need to comment on). Despite this, she’s one of the few who acts to defend someone other than herself, and her actions are (eventually) what brings liberation for the passengers (again not that they, or anyone else from the West, thanks her for it). It’s a neatly reserved performance from Wong (perhaps the best in the film), her eyes conveying an only thinly concealed contempt for those around her.

The closest thing she has to a confidante is of course Shanghai Lily herself. This is the perfect role for Marlene Dietrich, a woman who is both imperious and fragile, proud but willing to debase herself to save the man she loves, cold and knowing but also strangely naïve and romantic. As with much of her best work, what she does so brilliantly here is to bring together a host of contradictions that really shouldn’t make sense (except perhaps as some sort of sexual fantasy of von Sternberg’s?) and make it the most charismatic and arresting part of the film. Dietrich is not the most accomplished of actors - but she is an accomplished presence and undeniably charismatic.

Lily proves that she may be a hard-nosed player of the game, but that she’s more than capable of loyalty and faith to those she loves. She has no hesitation when asked to put herself in the way of danger for them. It’s a shame Dietrich doesn’t have a more charismatic scene partner than the rather bland Clive Brook (who ends up looking very forced as a romantic lead – you end up wondering what on earth this woman sees in him). But Dietrich’s movie-star magnetism holds much of the plot of the film together and provides much of its emotion. 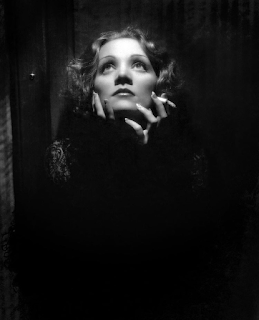 It’s all part of the film’s beauty and the skills behind its shooting. It starts with a series of flourishing tracking shots through busy train stations (something it returns to later on). Scenes that coat the film in smoke, with just backlighting, while soldiers and passengers move in front like a lantern show are extraordinary. The images make superb use of ultra-dark blacks to introduce frequently gorgeous images. With von Sternberg’s setting that only just touches realism in the faintest way possible, it makes for a wonderfully framed exotic fever dream – just as the film itself oscillates between action and languid romance in its pacing.

Shanghai Express is almost impossible to categorise. A romance with thrills in the middle, an action film where urgency is often off the table, a mystery that travels with an almost pre-ordained certainty towards its goal, it truly has a dream-like logic. And I guess if it’s all von Sternberg’s dream, it makes sense that it’s most striking scenes see Dietrich, perfectly lit, with smoke stroking itself around her. After all her charisma is at the film’s heart.