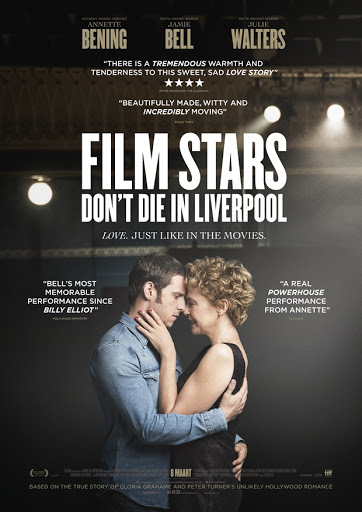 In 1981, Oscar-winning actress Gloria Grahame (Annette Bening) is performing The Glass Menagerie in Lancaster as part of a UK tour. When she collapses backstage seriously ill, she asks her former lover, young Liverpudlian actor Peter Turner (Jamie Bell), to come to her aid. Peter takes her back to his parents (Julie Walters, Kenneth Cranham) in Liverpool. The two had met a couple of years ago – Grahame the fading star, Turner the would-be actor – and age hadn’t prevented their relationship flourishing into a passionate romance. The film cuts between what pulled them apart in the past, and the present day, where Turner discovers Grahame has been diagnosed with terminal cancer and has at best a few months to live.

Film Stars Don’t Die in Liverpool is based on Turner’s book and is directed with just the right stylistic flourish by Paul McGuigan. Fundamentally a straight-forward (even rather conventional) narrative, McGuigan doesn’t crowd out the action and emotion, but skilfully intercuts past and present together (for instance, characters walk through doors in 1981 and emerge in their memories of 1979). This is pretty subtly done throughout (although the glorious, sun-kissed past and the rain drenched Liverpool present isn’t particularly subtle!) and allows the film to focus on its main strengths – the acting.

The success of the film rests on the chemistry – and skill – of the two leads who both give wonderful performances. Annette Bening excels in nearly a career-best role, as a star clinging to the remnants of her career. Outwardly displaying glamour and confidence – complete with a soft-toned movie star voice – it’s a brilliant study of inner fragility and uncertainty. She carefully reveals a Gloria Grahame who is deeply insecure and fragile.

Bening brings a lot of empathy to the role of a slightly lonely woman who has spent years avoiding questions around her own health, terrified that it could make her unemployable. It’s a fear that has a tendency to make her brittle and defensive. And of course, that’s only added to by her knowing that she is ageing in a young person’s profession. Even jokes about age expose her self-doubt and fear. (Peter drops an early clanger when she tells him after their first date she dreams of playing Juliet with the RSC: “You mean the Nurse?” he says without thinking. She throws him out.)

It’s one of the nice things about the film that the only person who really has a concern about age – or ever seems to mention it as an issue – is the older woman. Nobody else in the film questions the relationship between these two on age grounds (all the doubts raised are based on background and, above all, Grahame’s track record with marriage – four and counting). It’s purely an obsession of Grahame’s – because she doesn’t want to be reminded of her own mortality and, unconsciously, the far younger Turner is a constant reminder of this. And Grahame isn’t really that old anyway: certainly not at heart, her vibrancy being one of the first things that attracts Peter to her.

Peter’s feelings though are heart-breakingly genuine, shown in Bell’s wonderfully compassionate performance. McGuigan frequently allows long reaction shots to study the emotional impact of events on the characters, and no-one benefits from this more than Bell whose face is frequently a picture of conflicted, tortured emotion, of grief that he’s only just managing to hold in. Bell is terrific.

The film charts a romance that starts with a blissful freedom, but ends with a very true and heartfelt declaration of love. The past – saturated with cleanliness and colour as it is – is full of fun, romance and semi-surreal early encounters stuffed with expressive dancing (a great reminder that Bell can really move!) and watching Alien. The time the two spend in New York is similarly golden tinged. What draws it to a close is illness – and Grahame’s fears of how it will affect Turner as well as not wanting to live her last few months being nursed by her lover like an invalid.

It’s an involving romance and relationship piece, and it also gives time to how important families can be. Turner’s parents (lovely work from Walters and Cranham) are supportive and caring of Grahame – and his brother (edgy work from Graham) is only frustrated that they put her before their own interests. It makes quite a contrast with Grahame’s family, a mother who seems more interested in herself (Redgrave at her grand damest, showily quoting Shakespeare) and bitchy, jealous sister (a prickly Frances Barber).

But it’s mainly a film about the two leads and while it doesn’t reinvent anything about biopics or romances (or tragic stories of loss), it tells its story neatly and cleanly and allows scope for the acting to do a lot of the work. Bening and Bell more than rise to the challenge.