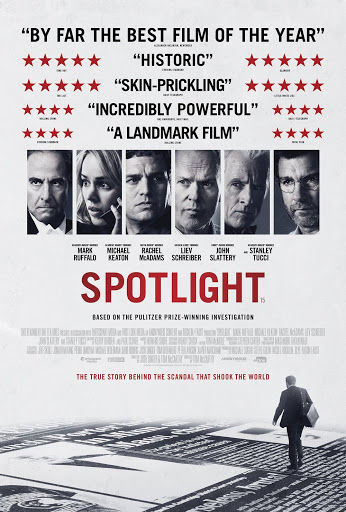 True villains are hard to spot: those clothed in good deeds are particularly well hidden. Few clothe themselves in good deeds more effectively than priests – and the small minority who use their positions of trust and power to abuse vulnerable children. It’s an unforgiveable, abominable betrayal that has ruined the lives of thousands of victims around the world. This century, the Catholic Church was rocked by a scandal: many in the church hierarchy were all too aware of these appalling acts, but protected priests from exposure rather than submitting them to well-deserved punishment. It took the work of crusading journalists to lift this veil and force the Church to begin to change its policy from protecting priests to protecting children.

The story was bought to wider attention by the dedicated work of the Boston Globe’s Spotlight team – the US’s finest investigative journalist team, a small team of reporters who work for months at one story. Boston is a firmly Catholic city, where the Church still holds a huge influence over the lives of its population. For years, faint suspicions of misconduct from any of the nearly 1,500 priests in the city was hushed up. It takes the arrival of an outsider at the Boston Globe – the paper’s unassuming new Jewish, Floridian editor Marty Baron (Liev Schreiber) – to push the Spotlight team to delve deeper into this story. He finds plenty of support from the team – respected editor “Robby” Robinson (Michael Keaton), the passionate Michael Rezendes (Mark Ruffalo), dedicated and empathetic Sacha Pfeiffer (Rachel McAdams) and increasingly disgusted Matt Caroll (Brian d’Arcy James). Using tried-and-trusted journalistic methods, passionate investigation, archival work and winning the confidence of survivors, the team piece together a systematic cover-up by the Catholic Church that extends all the way to the Vatican.

Spotlight scooped the Oscar for Best Picture (along with an Oscar for its brilliantly researched screenplay). It feels like a late Oscar partly awarded in memory of All the President’s Men, the film that Spotlight bears the most relation to. But, even more so than Pakula’s film, this is a low-key, reserved but strikingly effective and engrossing film that takes an almost documentary approach to the patient work required to uncover a story (no Deep Throat here) and the grinding shoe leather needed to get there. Fittingly, given the tragic story the team were reporting on, Spotlight is almost totally devoid of histrionics (there is at best one scene where a member of the team gets angry – only to be met with a quiet “are you done?”), instead being a tribute to the professionalism and integrity of journalists powered, but never overwhelmed by, their anger.

McCarthy’s film is refreshingly free of flourish or over-emphasis. It’s brave enough to let the story speak for itself, and trusts the viewer to understand both the emotional weight of abuse and the feelings of those involved without resorting to dramatic speeches or tearful dialogue. The details dominate – searching through archives for old newspaper clippings, waiting for access to court papers, days spent reading over a decade of parish records. Nothing is earned cheaply: every revelation the result of patient leg-work and following where the story leads without agenda or bias.

Agenda is something these journalists are deeply aware of. All of the team were raised in the faith to one degree or another, with strong roots in a community. The team’s leader, Robby, is an esteemed alumnus of a Catholic school one of the guilty priests worked at when he was a child – a revelation that quietly leads him to question both his implicit turning of a blind eye, but also how only a single man’s choices prevented him from becoming a victim. There is discomfort throughout the Boston Globe at the story – assistant Editor Ben Bradlee Jnr (a fine performance from John Slattery), while supportive of the team, is prickly at revelations that the Globe had previously not followed up reports of abuse and is deeply unhappy at the thought of accusing the Church itself. 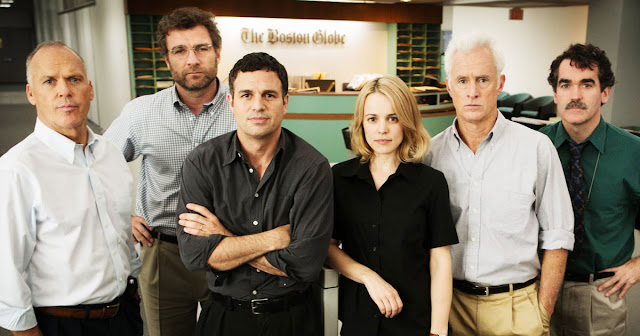 The power of the Church in communities like this is subtly, but brilliantly, depicted. The film opens in the 70s with a paedophile priest having his actions being quietly hushed up by the police after the intervention of an ADA. Virtually every important person in the city is a Catholic and, like Robby, has been bought up and schooled in the Church. In exterior shots, McCarthy’s camera constantly frames churches on the edges of shot, their spires visible over residential blocks. The scale of the power of this institution – its reach and influence – is constantly demonstrated. It’s a big challenge for the team to take on – and one which they are not even sure their readers are ready to read about.

But McCarthy’s film isn’t crude. It’s made clear that these priests are a minority – 6% – and the anger is not with faith itself, but with the flawed and wrong decisions taken by men (the psychologist the team consults, an ex-priest, makes clear his faith is not shaken by his discoveries, only his trust in the institution). Equal care is given to the victims themselves. Their stories are reported by two characters in the film, each time with a careful lack of over-emphasis and a quiet, yet emotional, honesty. No attempt is made to sensationalise any of this.

And the film also makes clear that everyone is in some way complicit in this. The Globe has failed to report it. The police and government have covered it up. People might whisper about it – or say a particular priest is “dodgy” – but no one has made an effort to rock the boat and find out about it. Instead, victims are paid off, priests are moved to new parishes and everyone tries to carry on as normal. It’s a grimy and quiet conspiracy – miles away from the Grisham-esque danger the film’s trailer suggested – rather a collective failure of moral responsibility.

The film’s low-key approach, professionalism and absorption in how people do their jobs is deeply engrossing. Few things, after all, are as involving as watching highly professional people execute their jobs flawlessly. The performances are superb. Michael Keaton gives possibly the finest performance of his career – surely connected to it being his most restrained – as the team’s leader, whose sense of personal guilt and regret quietly build along with determination. Ruffalo (Oscar-nominated) is fantastic as his passionate, committed colleague (he gets the one shouting scene). McAdams delivers quiet empathy and powerful intelligence. Schreiber confounds expectations as the numbers man who emerges as a dedicated searcher for the truth.

The truth is exposed – but it’s just a tip of the iceberg. The story might be out there, but as the film shows in its coda, the struggle goes on. Crusading maverick lawyer Mitchell Garabedian (Stanley Tucci, very good) can’t celebrate the story’s publication – he’s got two child victims he needs to talk to. Cardinal Law (a fine performance of assured, misguided, certainty from Len Cariou) is promoted to the Vatican. Similar scandals emerge across the world. But the problem doesn’t go away. Just as the story needs time and work, the same qualities are needed to reform the Church.

Spotlight is quiet, engrossing and finely moving and triumphant film-making. It focuses brilliantly on professionalism and dedication producing results and shows that hyperbole and embellishment are not needed for outstanding drama. Told with documentary realism, acted with reserved grace and skill, McCarthy’s film is a call-back to 1970s film-making in the best possible way. A deserved winner and a small triumph.