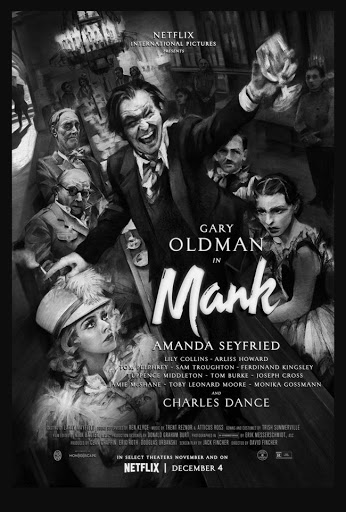 It’s 80 years old, but age has not dimmed Citizen Kane’s mystique, still one of the greatest films ever made. The story of its creation has intrigued generations, a fascination only increased by the larger-than-life personalities involved, from Orson Welles downwards. David Fincher’s lovingly made, but bitingly shrewd deconstruction of classic Hollywood, explores the creation of the film by focusing on its credited co-writer Herman J Mankiewicz, the film neatly intercutting between the alcoholic Mankiewicz drafting the screenplay while in enforced retreat and Mankiewicz’s prime years as a long-standing writer-for-hire to the major Hollywood studios of the 1930s.

Mankiewicz is played by Gary Oldman (at 62, already seven years older than Mankiewicz was when he died). A noted wit, Mankiewicz makes an excellent living running the writers’ room at Louis B Mayer’s (Arliss Howard) MGM. Mankiewicz views the work of writing films as slightly beneath him, easy money (“Millions are to be grabbed out here and your only competition is idiots” he cables Ben Hecht). Mankiewicz’s sociability eventually finds him an informal role as “court jester” to newspaper tycoon (and MGM bank roller) William Randolph Hearst (Charles Dance) and he builds a warm friendship with Heart’s shrewd mistress, actress Marion Davies (Amanda Seyfried). The relationship sours, not least as Mankiewicz grows disgusted by the dirty tricks campaign MGM and Hearst launch against the left-wing candidate for governor in 1936. In 1939 Mankiewicz works on the script for Citizen Kane, hired by Orson Welles (Tom Burke) with the support of an assistant Rita (Lily Collins) who helps him craft the words and stay sober long enough to type them.

Fincher’s film can easily be seen as a loving homage to old-school Hollywood. Certainly, Fincher fully embraces creating an impression of a film shot in the era it covers. From the carefully crafted period credits to the slightly distorted sound that apes the echoey on-set recording of classic Hollywood, this is a technical masterpiece. Beautifully shot in a series of sultry black-and-white images, with several visual references to Citizen Kane, it looks simply marvellous. The musical score is a brilliant mixture of Herrmannesque notes and classic Hollywood symphonic music with an edge. Even the casting has a slight old-school Hollywood unreality about it, from Oldman being at least 30 years too old to Amanda Seyfried being too young. Fincher embraces every flourish and stylistic tic from the Golden Era of Hollywood. 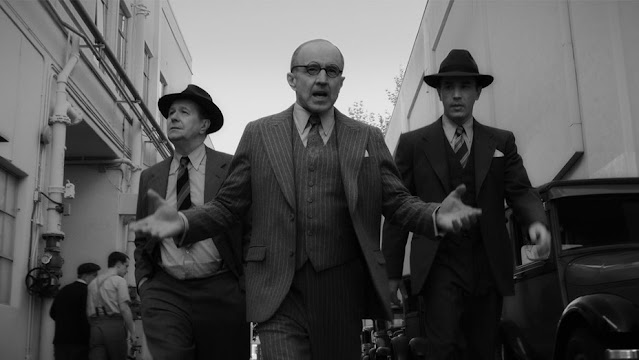 But the film is about as far as you can get from wearing rose-tinted glasses. Instead this is a vicious, almost angry, look at Hollywood’s corruption, that owes as much to Billy Wilder’s Sunset Boulevard. Hollywood is a carnival of greed and abuse of power, where art takes a second seat to cold hard cash (“This is a business where the buyer gets nothing for his money but a memory. What he bought still belongs to the man who sold it. That's the real magic of the movies!” Louis B Mayer exclaims). It’s a world where power is abused, lies are peddled to the public (Upton Sinclair, the Democratic candidate for governor, is subtly savaged by MGM-propaganda films) and the rich shamelessly steal from the rest.

The film doesn’t give a pass to the “talent” either. Mankiewicz and his writers’ room – a who’s who of greats, from Ben Hecht to George S Kaufman, SJ Perelman and Charles MacArthur – are blasé and spend almost as much time playing cards and seducing broads as they do scribbling ideas. Mankiewicz sets the tone, a super-smart wordsmith who thinks the movies are a joke and never invests himself in any of his work, happy to simply pick up a pay cheque. Mankiewicz doesn’t care about the quality of his work, and completely misses (or perhaps doesn’t even understand or care about) the power movies have to enthral people. Anyway, his judgement is terrible, denouncing The Wizard of Oz as an epic disaster in waiting and never bothering to ensure his work receives credit.

Oldman perfectly captures the shambling, slightly rotund and scruffy disdain of Mankiewicz, as well as brilliantly suggesting that the booze and cigarettes are really an aid to try and forget his own disgust and self-loathing. With Oldman’s verbal dexterity triumphant (Mankiewicz actually carries more than a few echoes of his Winston Churchill), Mankiewicz’s real gift (and reason for living) is a clubability and skill at getting on with everyone. He’s the ultimate insider in a profession he thinks is an unworthy joke. It’s what gives him the ability to drop perfectly formed, biting bon mots at the drop of the hat – and this devil-may-care attitude also amuses William Randolph Hearst (a chillingly still and powerful Charles Dance who can turn from congenial to menacing in a moment). 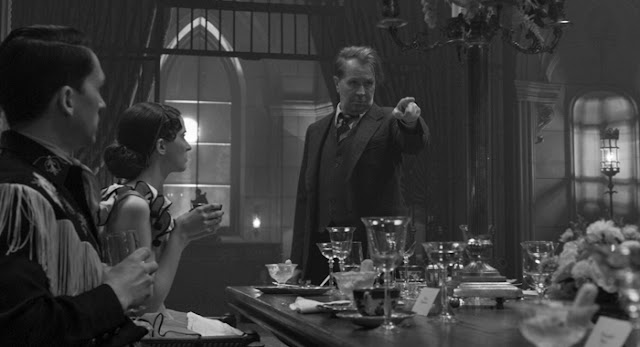 It’s also what wins the friendship of Marion Davies, who Mankiewicz recognises as almost a kindred spirit, a woman of intelligence and sensitivity who is playing a role in an industry she seems to hold in uncertain affection. This is terrific work from Amanda Seyfried in a career best performance, as she invests Marion with both intelligence, but also a touching vulnerability. However, unlike Mankiewicz, she is happy in the role she has been ‘cast in’. It would never occur to her to launch the sort of scathing attack on this gilded set that Mankiewicz’s script for Citizen Kane becomes.

The film is in fact less interested in the writing of this masterpiece than you might expect. Tom Burke makes a wonderfully detailed Orson Welles, but the film shows very little of the conception of creation of the film. It does however make sure to invest most of the credit for story and dialogue with Mankiewicz, with Welles reduced to a petulant tantrum (the inspiration for Kane’s room wrecking) when Mankiewicz demands credit. (The film is in effect a dramatization of Pauline Kael’s Raising Kane essay, which attempted to shift the key creative contribution to Mankiewicz in place of Welles). But then perhaps Mankiewicz has finally realised that films can be a vehicle for work that is worthy and respected.

That is surely the lesson that Mankiewicz learns from the 1936 Gubernatorial campaign. An offhand remark from Mankiewicz inspires MGM to refashion its news reel department into a propaganda machine. Mankiewicz is plagued by guilt, self-loathing and disgust for his employers over this cynical and destructive abuse of power – but also perhaps by his own failure to exploit his skills and talent to be in a position to really make a difference, other than just be an uncredited hired hand (in a way his brother Joseph manages to do).  Again, Fincher’s intelligent and beautifully crafted film leaves all this lingering in the mind, its initial impact only growing over time as you digest its complexities. 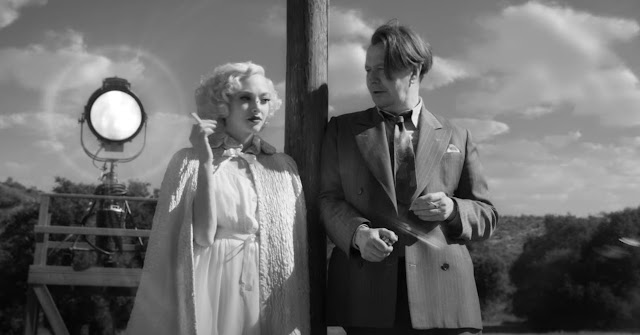 However, it is a film perhaps a little absorbed in its detail to keep an eye on the heart. There are several scenes that feel missing. The film needs more of Mankiewicz as the court jester at Hearst’s. It needs more space to allow us to understand where Mankiewicz’s rage and bitterness really comes from. It needs more time to tackle his mixed feelings about his work. More exploration of the foundations of Citizen Kane would not go amiss. The pace sometimes flags and it’s a cold and admirable film rather than one that can be loved, that occasionally feels a little pleased with itself (with its deliberately scuff-marked film and burned reel marks). I can well imagine some people using the dreaded word “boring” and it’s really a film for the cine-buff more than the casual viewer.

The main flaw in this film – and it might well be a big one – is that there isn’t enough focus really given for what motivates Mankiewicz to turn so completely against the gilded in crowd who feted him for so long. And, in fact, even when haggling over the credit with Welles, Mankiewicz still points out that he (unlike Welles) is a Hollywood insider and will win any arbitration. But the motivations of the film are hard to find amongst the skilful recreation of its design. The characters at times seem a little to artificial and lifeless to really care about.

But it has a host of other positives, all superbly marshalled by Fincher’s pitch perfect direction. The cast is superbly led by Oldman. Among the rest, Arliss Howard is terrific as the venal and hypocritical Louis B Mayer, Tuppence Middleton very affecting as Mankiewicz’s put-upon wife and Lily Collins charming as Mankiewicz’s assistant Rita Alexander. With its evocation of Hollywood style spot on, Fincher’s film also brilliantly deconstructs the dark, corrupt heart of Hollywood where powerful producers and money men are more focused on their own ends to the exclusion of all else. Shown through the eyes of one disaffected insider, it makes for a film-buffs delight and an intriguing if sometimes cold viewing.