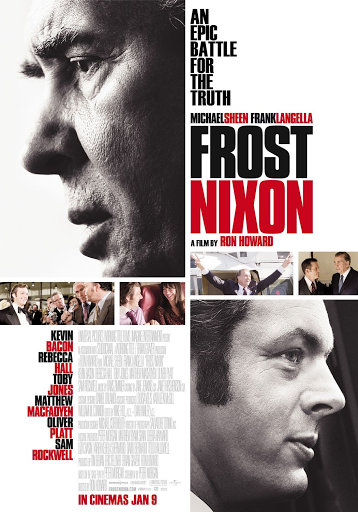 If there is a bogeyman in American politics, it will always be disgraced President Richard Nixon. Because, however divisive Donald Trump is, Nixon will always be the king who was toppled, the man some consider a crook and a war criminal, others a gifted politician and negotiator. The truth is somewhere, as always, in the middle – but what seems inarguable is that Nixon was a man of deep personal flaws, which contributed considerably to his fall. Peter Morgan’s play explored the complexities of Nixon’s character through his famous TV interviews with British talk show host David Frost, a man with a few chips of his own. Ron Howard takes what was already a fairly cinematic script by Morgan, and produces a smoothly professional, entertaining and very well acted film.

After Richard Nixon (Frank Langella) has been forced into resigning, he is in the political wilderness. Watergate engrossed the world, with hundreds of millions of people tuning in to follow every detail. Who in television could resist those numbers? Certainly not David Frost (Michael Sheen), who believes if he can secure an exclusive interview with Nixon he could have a television package that could pull in millions of viewers, make Frost a fortune, and catapult him into the front ranks of TV interviewers. Slowly the project comes together. But both participants have a lot to prove: for Nixon this could be a chance of redemption; for Frost to prove he is more than a chat show host better suited to grilling the Bee Gees than the President. With both men underestimating each other, who will emerge on top in the interviews?

One of Ron Howard’s greatest strengths as a director is his ability to elicit fine performances from good actors. This is the real bonus he brings to this faithful adaptation of Morgan’s award-winning play. He presents it with a highly skilled professionalism and a refreshing lack of distraction that allows the audience to focus on the acting and the dialogue, its real strengths. Frost/Nixon is sharply written – with Peter Morgan’s expected mix of careful research and dramatic licence (most especially in a late-night phone call between the two men before the final day’s filming) – crammed with fine lines, well drawn characters and fascinating insights into both politics and television.

Perhaps Howard’s finest decision was to ensure the two stars of the play (in both the West End and Broadway) were retained for the film. Langella and Sheen’s performances – already brilliant in the stage version, which I was lucky enough to see – are outstanding here, both of them completely inhabiting their characters. The comfort and familiarity between the two performers are crucial – and ensure that the vital scenes between the two characters carry an electric charge.

Langella brilliantly captures the physicality and voice of Nixon, but also finds deep insights into the President’s tortured soul. He communicates Nixon’s sense of inadequacy and bitterness, his resentment at having to fight all his life for things others have been gifted. He balances this with Nixon’s pride and paranoia that constantly leads him to cheat others first. Langella’s Nixon, lost and bored in retirement, is desperate to regain his statue, but also tortured by a guilt and regret he can hardly bring himself to name. Under his robustness and confidence, lies deep shame and sorrow. It’s a brilliant capturing of perhaps the most psychologically complex leader America ever had.

Sheen is just as superb as Frost. As you would expect from an accomplished mimic, the voice is almost alarmingly accurate (he makes a better Frost than Frost did!). But just as insightful is his understanding of Frost’s psychology. Just like Nixon, Frost is a hard-working lad from a poorer background who has had to fight for everything he has. Sheen’s Frost is a phenomenal hard worker – producer, financier and star of his own career – who works hardest of all to appear an effortlessly confident dilettante. Sheen’s Frost balances immense pressures – facing personal and financial ruin – with an assured smile, keeping every plate spinning by never allowing a moment of doubt.

It leads into fascinatingly different attitudes to the interviews themselves. Nixon prepares in detail – and determines his best strategy is long winded answers that present his case and prevent attack. Frost is so focused on delivering the interviews that he sacrifices his actual interview preparation (certainly more so than he did in real life). Morgan uses the conventions of boxing dramas – corners, breaks between ‘rounds’, advice from their trainers – to capture a sense of gladiatorial combat.

However, the play is more complex than this. The reason why Frost struggles to land a glove on Nixon in earlier interviews on his domestic and foreign policies is that Nixon genuinely believes he is in the right – but (perhaps as Frost understood) the final interviews based on Watergate will see a more vulnerable Nixon as on that subject he knows he’s in the wrong. I suspect the real Frost knew that to get to Nixon on that final topic, he needed to be ‘softened up’ first to feel comfortable and produce a revelation.

Because the film is refreshingly positive in its view of television. A medium that films often attack for being trivial and boiling things down to soundbites and snippets, here acknowledges the strengths that can bring. A single snippet of an apologetic and crushed Nixon is worth thousands of words – and small moments can turn a TV programme from a failure to an event. Howard uses the power of the close-up at these moments to demonstrate how TV can zero in with a merciless gaze on a single moment. It’s a defence of the power of TV and its ability to reduce things down to moments.

Howard’s understanding of the strengths that lie at the heart of the play – and to tell the story simply – is what makes an already cinematic play translate wonderfully to the screen. With Langella and Sheen outstanding (with the supporting cast all equally excellent), the film entertainingly demonstrates the preparation and delivery of the interviews, while offering shrewd psychological insights into two men who had a lot more at a stake – and in common – than at first appeared. Professional, handsome and captivating, this is Hollywood movie making at its best.