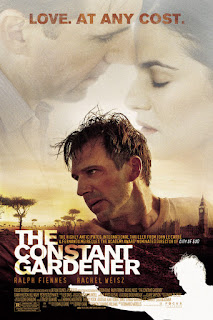 John Le Carré’s reputation as a spy novelist without peer can lead people to forget his books are often scathing condemnations of Western policy. The Constant Gardener, a superb adaptation of one of his finest novels, is no different. It’s a passionate, angry denunciation of how Western pharmaceutical companies, and their government partners, exploit the people of Africa. But it carries real force as it’s interwoven with a moving and tender study of grief and how it changes us, pushing us to see things from a different perspective. It’s that which gives the film its force.

Justin Quayle (Ralph Fiennes) is a middle-ranking career diplomat, serving in the high commission in Kenya. His wife Tessa (Rachel Weisz), an idealist determined to make a difference, is murdered. Justin determines to get to the bottom of her murder – and finds Tessa was investigating a British drugs company using the distribution of AIDS drugs to poverty-stricken Kenyans to test an experimental TB drug, covering up the harmful side effects and disposing of the dead. As flashbacks reveal Tessa’s investigation and motivations, Justin becomes ever more determined to unmask the drugs companies, and the figures in the British government protecting them.

Directed with vibrant urgency by Fernando Meirelles, The Constant Gardener is part thriller, part romance and part study of loss. Continuing his style from City of God, Meirelles’ camera work is jagged, hand-held and often unsettling, becoming ever more disjointed and edgy as the plot itself heads into darker and darker territory. The film throws us into its Kenyan setting, not shying away from the poverty of the villages. At one point, an aerial shot travels from the golf course, where the British are at play, across a train track and settles on the neighbouring slums.

This is all part of the film’s anger, which translates Le Carré’s feelings from the book. Inspired by the story of an aid worker he met in Cambodia in the 1970s (and who died in Kosovo in the 90s), the film is as furious as the novel at the heartless exploitation of Africa for the benefit of Western companies. Who counts the cost of Kenyan lives lost to experimental drugs? Certainly not the rich and powerful, who keep any consequences at a distance and rationalise them as for the greater good.

And not many have the courage to stand up to this. Most it seems are like Justin – good people who prefer not to think about, or look to deeply at, the impact we are having on the world. It takes a firebrand like Tessa to shake things up – and she pays a huge cost for it. Starting with Tessa’s death, the film feels at first like a mystery, but the culprits are all too obvious. Instead the question is why, not who, and the dark conspiracy that unfolds is really about establishing who knew what rather than who was involved (everyone, of course, was involved).

Rachel Weisz (winning the Supporting Actress Oscar for her work here) excels in a part that could have been a holier-than-thou left-wing agitator, but which she makes warm, human and real. Tessa is a woman who cares deeply, but also loves deeply, who is genuine, unaffected and speaks her mind. Weisz’ performance hits just the right notes, passionate but playful. The bond between her and Justin is real and based on a deep love on both their sides.

So warm is her performance, that you totally understand the all-consuming grief and loss Justin suffers at her death. It’s a very different sort of part for Fiennes – gentle, vulnerable, sweet, far different from his more patrician roles. He nails the part perfectly, bringing out of it a great deal of emotional force. The film is a tender exploration of the impact of grief on a person, and the mixture of shock, sorrow, anger and confusion in Fiennes’ performance feels completely real. This stillness and sombre approach to loss carries real weight.

The film becomes both a crusade – the husband taking up the cause of his slaughtered wife – but also an unusual romance. The greatest pain for Justin is discovering that his wife kept so much of her life secret from him. She did it to protect him, but he longs for the chance to prove to her that he could have been her “secret sharer”, that she could have trusted him. Effectively the film – and Justin’s quest – is to emotionally reunite with his wife, to fully understand her. The emotional heart of the film is this story, the husband effectively communing with the ghost of his wife, wanting there to be no more secrets keeping them apart.

This does mean that, at times, the conspiracy angle of the film gets slightly rushed. A late sequence effectively is four confessions from supporting characters to Justin in a row. The film gets a little bogged down in the mechanics of Justin chasing down various pieces of paper. The eventual quest to find the doctor behind the scandal (a wizened with guilt Pete Postlethwaite) offers a rather neat resolution. But it doesn’t matter too much as the film culminates in an ending that is as bizarrely bleak as it is hopeful.

Beautifully shot by Meirelles, with a raw immediacy that keeps the tension up, with a genuine sense of Kenyan life, it has a wonderful cast of character actors doing their bit (Bill Nighy as an arrogant senior diplomat and Danny Huston as a weasely coward stand out). It’s a film that is full of righteous fury at the West – but also with a tender beating heat for the pain of grief and the struggle with mourning. Emotional and political, it’s the finest Le Carré adaption on film.