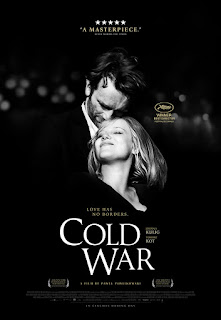 Pawlikowski’s film is a heartfelt, heavy fictionalisation, of his own parent’s marriage. Or at least the emotions and clashes that lay at the heart of this turbulent marriage, rather than the actual events themselves.

In post-World War II Poland, the Polish government are funding the creation of a folk-music ensemble, to promote Polish culture. Wiktor (Tomasz Kot) is the lead conductor, helping to select the members. One of the applicants, Zula (Joanna Kulig) is a talented musician who has misled the committee on her background. Wiktor recruits her anyway and she swiftly becomes lead singer of the troupe – just as she and Wiktor begin a heated relationship. When the troupe journeys to perform in Berlin, Wiktor takes the opportunity to cross the border – but Zula, frightened of the risk, refuses to go with him. Over the next fifteen years the couple intermittently come together again. When apart, they long for each other. When together, it never takes long for joy to transform into envy, bitterness, anger and frustration.

The film is called “Cold War” – but it’s about the feuding relationship between these two different but very similar people, and the clashes between them caused by their hearts. Pawlikowski creates some neat commentary around how the Cold War – that division of Europe into two opposing camps – throws up even more boundaries between the two. The defection of one from Poland instantly makes it nearly impossible to meet. Both long for their Polish homes, aware that they can never lead the life they want there.

What’s a shame is that these themes don’t mix very well with the dark romance of the main storyline. It’s impossible watching the film not to think about Pawlikowski’s previous film Ida. Like Cold War, Ida was shot in gorgeous black-and-white (using the non-widescreen Academy ratio 4:3) and explored family problems in post-War Poland. But Ida managed to be both a deeply emotional investigation into the traumas historical and political events have inflicted on a family, while also giving a riveting insight into the scarred land Poland was for much of the twentieth century. Cold War misses this additional layer, focusing excessively on the personal, with two characters at its centre that it’s harder to relate to.

I always feel bad when I’m reduced to saying that the film didn’t work so well for me because I didn’t care for the lead characters. There is very little to fault in the performances. Both have an absorbing chemistry, and develop characters that are prickly, difficult, passionate, firey figures. Kot is, by turns, reserved and obsessive, prone to rash decisions he regrets at leisure. It’s something he shares with Zula. Joanna Kulig is very impressive here, carrying a defensive coldness at her heart that she only rarely allows to melt. She is a character rife with contradictions – decisive (except when she isn’t), passionate (except when she’s rational), loving (except when she hates). She’s a cocktail of confused emotions – perhaps stemming from a troubled childhood.

Both characters have striking self-destructive streaks. The film – like many of Pawlikowski’s films told in a very tight runtime, little more than 80 minutes – charts how these two characters time-and-time again find themselves in a position where they could seize happiness – only too promptly ruin it with jealousies, bitterness and narrow-mindedness. After a while, I confess, I found it wearing. Their decisions are so often – so obviously – wrong, naïve and stupid, that it gets too much. Their relationship is so fuelled by selfishness and disregard for others – partners, spouses, children – that after a while I found myself wanting to give them a shake and tell them to sort themselves out.

Essentially, for all its heartfelt passion and poetic beauty, it’s a “can’t live with, can’t live without”  tale. Its told with pace, but I felt I could actually do with a few more minutes to understand these two people better. There is probably one too many rural peasant troupe performance eating up runtime that could have been better spent getting a grasp on the characters.

The black-and-white shooting is extraordinarily beautiful, and Pawlikowski’s direction is, as always, perfectly judged, well-paced and tender. But for me this becomes a slight film about two people its’ hard to warm to, with an ending that suddenly tips into something both far more operatic and also slightly too pleased with itself. I missed the grace, beauty, wisdom and depth of Ida, which looks more and more like a perfectly judged masterpiece that balances the personal, the emotional and the social perfectly. Cold War, on the other hand, only feels like it scratches the surface of many of these themes.