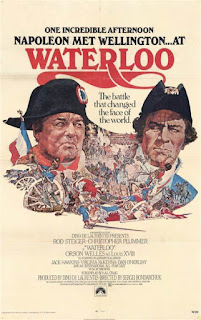 In 1970 there was no CGI. Want to stage a battle scene? Well you’re going to have to use real people, rather than populating your screen with pixel soldiers. I’ve always had a fondness for epic films of this era, where you look at the screen and know everything is real. And one of the best examples of this battle-heavy genre is this 1970’s chronicle of the Battle of Waterloo in 1815. Because in 1970 the only way to recapture the battle on camera was effectively to re-fight it with a cast of tens of thousands of extras and horses, across a film set the size of the original battlefield. Can you imagine anyone attempting that today?

An international co-production, the film throws together an eccentric hodgepodge of actors. No more than you would expect of a film co-financed by Italy and the Soviet Union, shot in English, directed by a Ukrainian (with a team of four translators) with a lead actor from New York and the cast stuffed with dubbed actors from across Europe. In fact the slight air of Euro-tackiness about the film is one of the things I sort of love about it.

Rod Steiger as Napoleon delivers the sort of OTT performance he loved to give, capturing the self-aggrandizing, larger-than-life nature of the Emperor while frequently chewing the scenery and oscillating between whispers and shouting. It’s perhaps no more than you would expect when playing a man whose entire life was a stage-managed performance of dangerous charisma. It does though make a nice contrast with Christopher Plummer who, perhaps aware of who he was working with, goes for an archly low-key, even wry touch, as the more austere Wellington.

The film covers the time period of Napoleon’s Hundred Days, from his arrival from Elba to the final defeat at Waterloo (with a neat prologue showing an exhausted Napoleon accepting he must abdicate and head into exile in 1814). Much of the first half hour is a showpiece for Steiger’s bombastic Napoleon. Few other characters get a look in (Welles cashes another of his cheques for one-scene cameos, as a bloated Louis XVIII fleeing into exile). To be honest, much of the first half of the film is a slighty stodgy (more-or-less) faithful trot through historical events leading to the battle.

But this is really to set the table for the film’s central appeal, which is that astonishing recreation of the battle itself. Shot in the Ukraine, the Soviet Union (as their part of the deal) effectively recreated the landscape of Waterloo, bulldozing hills, planting thousands of trees, sowing fields and laying over six miles of drainage to help create the muddy fields. On top of which, the USSR threw in 17,000 troops to serve as extras (insanely impressive, even considering it’s only a fraction of the nearly 191,000 troops involved at various stages in the battle).

Marshalling all this was Soviet director Sergei Bondarchuk. Used to commanding film sets like this – he had previously directed a four-part version of War and Peace, where similar number of Soviet troops had recreated Austerlitz and Borodino – Bondarchuk certainly knows how to show the money is all on screen. Aerial shots and long tracking shots take in regiments of soldiers taking up position. Cavalry charges of hundreds of horses are brilliantly shot. The French cavalry charge against the British infantry squares is stunning in its scale and size. Everywhere you look, wide-angled shots demonstrate the depth of extras, the vast scope of the battle and the huge numbers of soldiers marching across screen. If nothing else it’s a superb marshalling of resources.

Bondarchuk brings a number of stylistic flourishes from his War and Peace to the film here. Sadly many of these choices have dated badly – and even at the time, looked a little silly. Interior monologues are demonstrated with close-ups and the sound of actors whispering over the soundtrack (although Bondarchuk also mixes this up with a prowling Napoleon addressing the camera directly). The film loves crash-zooms and fast wipes – one crash zoom generates giggles as it zooms in on Napoleon as he turns fast to face the camera after particularly bad news. Bondarchuk at times drains out the noise of the battle to focus on small details, most notably in the British cavalry charge. It gives moments of the film an odd dreamy film, particularly striking because most of it is so baked in realism.

To be honest the film is workmanlike, rather than inspired, with all the focus on marshalling the thousands of extras. There are moments of character for both Napoleon and Wellington – flashes of doubt, insecurity, fear are mixed in with supreme confidence. The film also hits a neat line in the horrors of war. The camera tracks along the mangled bodies after the battle, while at the peak of the clash a British soldier has a mental collapse, breaking from his square to bemoan “Why are we killing each other?” Not exactly subtle, but it works.

But the film’s main appeal is that scope – and its breath taking. The film itself is more to look at than think about, but with the detail of its recreation of the battle makes it a must for any Napoleonic history buff. Peter Jackson has said his own cavalry charges in Lord of the Rings were inspired by this film – the difference being Jackson’s horses were CGI, while Bondarchuk literally charged hundreds of horses direct at the camera. And you won’t see scope like that anywhere else.

And that’s partly because the film was a bomb, putting an end to such huge scale films as this and also leading to Stanley Kubrick’s plans for a Napoleon biopic being cancelled. Perhaps the worst part of its legacy.