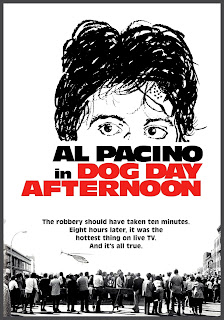 Perhaps only in the 70s could a failed bank robber have been turned over-night into a counter-culture folk-hero. It’s the subject of Sidney Lumet’s thrilling, heist-gone-wrong movie, set on one sweltering day in New York when Sonny Wortzik (Al Pacino) tried to rob a bank to fund the sex-change operation of his boyfriend Leon (Chris Sarandon). He ends up taking the co-operative bank staff hostage while a media and public firestorm takes place outside the bank, mixed in amongst an army of trigger-happy cops. And it’s all based on a true story.

Sonny is far from your hardened criminal. He doesn’t want anyone to get hurt. He takes care of the hostages, who all become immensely fond of him and his less confident partner-in-crime Sal (John Cazale). When the police and media turn up, Sonny is outraged at the trigger-happy police presence and quickly wins the support of the crowd with his honesty, bluntness and quick wit. With the police incapable of controlling the situation, soon he is actively playing to the crowd, taking phone calls from the press in the bank. He becomes a counter-culture icon, sticking it to the man (his famous chant of “Attica!”, refers to the famous prison riots, where prisoners rioted to secure their rights).

It’s the key topic that fascinates Sidney Lumet, in this brilliantly frentic, edgy and dynamic film, that captures the tension in New York, where it felt like the careful balance between law and order could disintegrate any time. Lumet’s improvisational feel with the crowds, the edgy, raw performances – particularly from Pacino and Durning, both of whom are sensational – and the sense that anything could happen at any time. Dog Day Afternoon is about a city on the edge, combined with the ability of the media to turn regular people into stars. There was little faith in the authorities, and even a little bit of nose thumbing in their direction could sway the crowds.

At the centre of all this is Sonny, a fascinatingly flawed person, partly absorbed with being the centre of attention, part desperately trying to work out what his best move is among an increasingly narrowing number of options. Al Pacino nearly didn’t take the role, after suffering a near nervous collapse from the pressure of Godfather Part II – but, after committing to the film, he gave one of his most extraordinary performances of an era he and a small group of actors dominated.

Sonny feels increasingly trapped in his predicament. The robbery of the bank is hilariously cack-handed from the start – one of the robbers bails in minutes and has to be begged not to go home in the get-away car – and it becomes clear that for Sonny this is all a last desperate throw of the dice. Both of his relationships – with his first wife and his second marriage to Leon – are relationships on the brink of disaster, destabilised by Sonny’s desperate need for prove of love and affection. He’s a man uncertain in his own skin, smart enough to know the world isn’t fair, but not smart enough to know what to do with it. Fundamentally decent, but forced into illegal actions. Pacino delivers this with the expected fireworks, but when we see Sonny away from the public gaze, he’s a sad, broken-down, isolated man who genuinely doesn’t know where his life is going.

Dog Day Afternoon was radical at the time for how it deals with homosexuality. Neither Sonny nor Leon are presented – as might have been expected at the time – as limp-wristed or fey, but just regular guys who happen to want different things from life. Chris Sarandon (Oscar nominated) is strikingly tender, low-key and world-weary as a man resigned to what the world is throwing at him, from the emotional pressure of meeting Sonny’s needs for affection, to spending every day feeling trapped in his body and facing suspicious stares from all around him. Pacino presents Sonny as a masculine, dynamic figure whose sexuality is just part of his personality. It’s a film not afraid to acknowledge the love between men, and never considers this anything other than entirely normal – something extremely unlikely in 70s cinema. Indeed, you can see the mood of the time in the way the crowd changes once the motivations behind Sonny’s actions becomes clear. Hostility grows – through many gay rights activists quickly arrive to bolster the crowd. The films normalising of homosexuality, also serves as a critique for the assumptions and reduced options many identifying as gay had at the time. 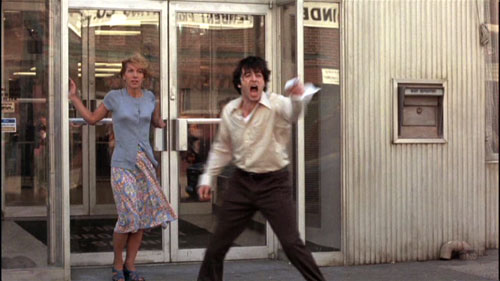 Of course, this all makes the entire siege even more attractive to the media. The film is a neat satire of the way the press can turn events like this into entertainment. A pizza delivery guy, sent to feed the hostages, can barely contain his excitement, screaming “I’m a star!”. At least two hostages refuse offers to leave the siege – at least partly, it’s suggested, because there is nowhere better to be than at the centre of the show. Pacino’s electric playing to the crowd demonstrates how Sonny’s firecracker sense of the turmoil of the period – the violence of the authorities and the lack of justice for the regular guy – helps feed this. The media’s eagerness to sensationalise the events, do turn them from real life into entertainment – and the way so many characters and on-lookers yearn to be part of a real-life drama – is sharply critiqued, with truth and humanity sacrificed for prime-time ratings (ideas Lumet would explore even more deeply in his next film Network).

It’s also fascinating to watch the cack-handed police inexperience at handling sieges like this, from the lack of central control to the trigger-happy cops, to allowing public and the media to get within a few metres of the bank entrance. Charles Durning is superb as a frazzled police sergeant, out of his depth, unable to control his colleagues and totally lacking the calm and control needed for hostage negotiations. He’s replaced in the operation by FBI agent Sheldon – played with a chilling distance by James Broderick – who represents the other side of the law at the time: ruthless, cold and very ready to switch from negotiation to execution.

Sonny may look is in control of things, but it’s quickly clear no-one really is. Even Sonny feels this, Pacino delivering with a resigned calm a scene where Sonny asks one of the bank tellers to record his final will. Dog Day Afternoon is also a tragedy, with the real victim being Sal, Sonny’s partner in the robbery. He’s played with an almost childish innocence by John Cazale, as a not very-bright man completely out of his depth, whose idea of a foreign country to escape to is Wyoming (a hilarious piece of improvisation by Cazale). While Sonny is the public face of the situation – and someone law officials figure they can work with – Sal becomes a dangerous unknown quantity for them that they feel needs to be disposed with. An offer they openly make to Sonny, who furiously rejects it (but, tellingly perhaps, doesn’t tell Sal about). 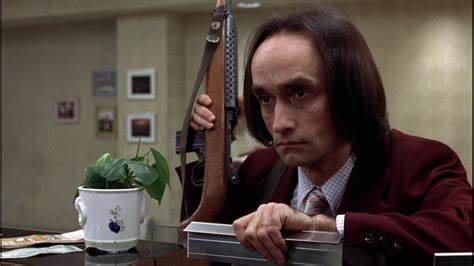 Poor Sal sweetly chats with the staff. He quietly warns about the dangers of smoking. He sweats and timidly waits to be told what to do. He bravely tells Sonny that he is completely ready to shoot the hostages, while clearly having no idea about the emotional reality of doing this. He meekly follows instructions and is responds with panic to almost every situation. Cazale’s flawless performance turns him into the real victim here, completely unprepared in every way for the situation he is in (he whiningly complains about being called gay on the news, and is terrified at the idea of flying with the hostages to a foreign country, having never been in a plane before). It’s a wonderful personal tragedy that plays in the background of the film.

Lumet’s film has the dynamic vibe of a fly-on-the-wall documentary turned drama. Pacino is the perfect actor for this, his performance (Oscar-nominated) sensational, high-octane and demonstrative mixed with confused, vulnerable and eventually traumatised and guilt-ridden. The film brilliantly balances questions of politics, media and sexuality, offering seering critiques of attitudes around all three. Wrapped into a fire-cracker film, this is a brilliant piece of social commentary, personal tragedy and street theatre. Overlooked more than it deserved, it’s a masterpiece of 70s film making.