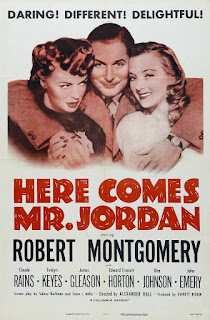 One of the best things about the Hollywood Studio system is that created an environment where middle-brow talents could suddenly lift themselves up to create something very special. That’s certainly the case with Here Comes Mr Jordan, the career high spot for its director and its main stars. It’s the sort of product of Classic Hollywood where everything comes together perfectly and delightfully.

Joe Pendleton (Robert Montgomery) is a boxer with a shot at the title. An amateur pilot, Joe flies his own one-man flight to New York for the match. On the way, his plane crashes. An officious Angel, Messenger 7013 (Edward Everett Horton), collects his soul – only to find on arrival in heaven that Joe was meant to survive the crash and live for another 50 years. Unfortunately, by the time the mistake is found out, Joe’s body has been cremated. Head Angel Mr Jordan (Claude Rains) has no choice other than to find Joe another body on Earth. So Joe winds up in the body of millionaire Bruce Farnsworth, recently murdered by his wife Julia (Rita Johnson) and secretary Tony Abbott (John Emery). In his new body, Joe decides to correct Farnsworth’s wrongs, returning his embezzled money to investors and helping to free the father of Bette Logan (Evelyn Keyes), who took the blame. Joe also wants to retrain for a boxer – recruiting, much to his confusion, his old coach Max Corkle (James Gleason) – and he and Bette begin to fall in love. But Joe’s destiny, it turns out, is to be the champ – and he can’t do that in Farnsworth’s body. How will Mr Jordan clean this mess up?

Here Comes Mr Jordan is a delight, a hilarious musing on reincarnation and afterlife, in which the next world is as weighted down by bureaucracy and red tape as much as this one. With neat, unobtrusive direction from Alexander Hall (who never hit the jackpot like this again), the film keeps its comic balls up in the air beautifully, while throwing in some neat observations around life, death and fate. The script bubbles with lovely bits of invention, from the Afterlife to a bureaucratic organisation to Joe’s inhabiting of Farnsworth’s body (after trying a few other bodies on first), while still appearing to himself (and we the viewers – a neat idea that the film invites us not to think about too much as Joe’s mannerisms and physicality must be completely different from Farnsworth) unchanged from his original body.

Around this the film gets some neat pot shots at big business corruption. In some ways this is a little like A Matter of Life and Death mixed with Capra. As in Capra, the humble, kind-but-not-super-smart regular Joe is the one who takes a long-hard look at the corruption and greed of Big Business and Corporate America and decides “there has to be a better way”. The kind of guy who solves major business problems simply by doing the right thing and listening to his heart. Counterbalancing that is Joe’s ongoing obsession with continuing his boxing career, from his determination to get a body that’s “in the pink” (a phrase that drives Mr Jordan up the wall) to roping in his ageing butler into a series of vigorous workouts.

A large part of the charm of Joe Pendleton lies in the brilliantly dry, witty, sweet but still a little selfish qualities that Robert Montgomery (Oscar nominated) brings to the part. Playing the part with a homespun Brooklyn honesty and simplicity, Montgomery also has a childish delight in finding he can pass unobserved as this new man (particularly funny after his initial terror that he will be “found out” any second), while his boxing obsession has an endearing genuineness to it. Montgomery, as well as getting the light comedic tone spot on (no surprise that Cary Grant was the first choice for the role – although he could never have played the working class Joe as well as Montgomery does he) he also builds a very sweet and charming romance with Evelyn Keyes (also in a career best role), who is ill-treated but defiantly assured of the importance of doing the right thing as Bette.

The whole cast is quite superbly assembled, seasoned pros, doing their thing with aplomb. James Gleason was Oscar-nominated as Joe’s befuddled manager, trying to wrap his head around incarnation. Gleason also gets some of the finest gags, as Corkle tries to interact with Mr Jordan, who remains invisible to the living – but also brings a genuine warmth and tenderness to his feelings for Joe, who he clearly sees as a son. As Mr Jordan, Claude Rains is smoothness personified, playing the entire film with a relaxed grin on his face, gleefully mixing in an obsession with ensuring the “rules” are followed, while offering a dry reaction to events such as murder. As his underling Edward Everett Horton brings his patented A-game of flustered middle-man.

Mr Jordan grins so much through the film it’s easy to forget that he’s basically the Angel of Death. Reasonable and supportive, Jordan is also blithely unaffected by death and murder. The film, among the jokes and the general air of a fairy tale, has a little vein of darkness. In his introduction Jordan is overseeing the collection of souls from some of the battlefields of World War II. Later he calmly informs Joe of Farnsworth’s murder taking place even as they speak. The film doesn’t hesitate to shy away from the details of Farnsworth’s killing – or from two further murders. It’s a little nugget of darkness in amongst the charm, and a reminder that this comedy on death and the afterlife took place while the world was tearing itself apart. No wonder death can sometimes not be as big as a deal to everyone as it is today (especially to the Angel of Death).

Because the film has a more Capraesque belief that what matters is not who we are but what’s inside. Joe will appear as Farnsworth to everyone, but eventually what people will respond to (he is told by Jordan) is the person inside not the outward appearance. The potential that Joe may have to move to a new body to fulfil his destiny of becoming the champ, doesn’t meant that he and Bette need to necessarily be apart if his heart remains the same. While the film does suggest (I feel darkly!) at one point that Joe may forget who he was originally the longer he is in a new body, the more it stresses the point that the basic qualities of his decency won’t be lost.

Its ideas like this – combined with expert telling and superb Classic Hollywood grace and skill in its shooting, directing and acting – that give Here Comes Mr Jordan a little bite, along with its comic impact. Nominated for seven Oscars it won two – and it stands to be remembered in what was a glory year for Hollywood. You might expect something rather slight – but this delightful comedy is as thought provoking as it is playful.