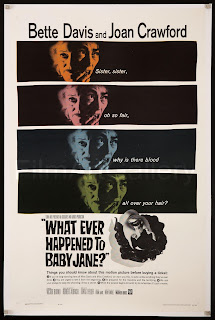 Age isn’t kind on the careers of Hollywood actresses. Move into your 40s and the part offered quickly becomes “the grandmother”. It’s a fate that saw the careers of some of the greatest actresses of the Golden Years of Hollywood crash screeching to a halt. However, these actresses remained popular with many cinema goers. So it occurred to Robert Aldrich, why not throw a couple of them into the sort of roles t

hat can riff on their careers and public images? Match that up with jumping on the bandwagon of films like Psycho and you could have a hit on your hands.

That’s what he got as well with Whatever Happened to Baby Jane. Jane Hudson (Bette Davis) is a former “infant phenomenon” on the stage, whose career fell apart as soon as she hit puberty. Her sister Blanche (Joan Crawford), on the other hand, grew up to have a promising career in Hollywood – which then collapsed when a late-night driving accident (which Baby Jane is widely believed to be responsible for) left her paralysed from the waist down. Now in middle age, Jane and Blanche live in domestic disharmony, Blanche trapped upstairs at the mercy of Baby Jane, whose longing to rebuild her career sees her head down an ever steeper spiral of insanity.

Whatever Happened to Baby Jane started a new genre in Hollywood – the freak hag-horror or psycho-biddy genre (those names alone show that at its heart this genre was basically demeaning) which saw Hollywood Grande Dames (frequently Davis and Crawford, though others got a look-in as well) parley their reputations into ever more formulaic riffs. Films like this quickly became cult viewing. Their extremes of make-up and performance, matched with the arch camp of the leading ladies hamming it up, made the genre extremely popular – and left films like Whatever Happened… far more fondly remembered than they deserve.

It’s popular to see Sunset Boulevard as a sort of precursor to this genre, a first try-out in taking an older era of Hollywood and turning it into a ghastly waxwork show. But Sunset still has affection  for what it shows (and above all captures the tragedy of the death of Silent Hollywood, treating its characters as people rather than freaks), while Whatever Happened has none, basically seeing the past as a parade of monsters, and these relics as waxworks to be mocked. There is no affection here for the past successes and glories of either star, instead we are invited to sit back and wonder at how far they might be willing to go to see bums on seats again. All of this to make money for the producers. Far from the art of Sunset Boulevard, this feels more like the exploitation of screen greats.

Although of course both stars were more than happy to get involved, even if they were less than happy working with each other. The background to the film, to be honest, often carries more interest than the very long, often slow, horror/black comedy during the film’s over-extended run time. Famously Davis and Crawford were long-standing rivals and their relationship over the course of making and promoting the film disintegrated into cheap one-upmanship and bitter recrimination. While the feud does probably give some edge to the screen antics, the very fact that it’s nearly the first thing people remember about the film probably tells you how memorable the actual experience is.

Davis throws herself into all this with creditable abandon. (She was Oscar nominated and Crawford wasn’t – although Crawford got the last laugh, having arranged on the night to collect the Oscar on behalf of eventual winner Anne Bancroft, performing on Broadway that night.) Davis designed the freakish but iconic look of Baby Jane, all painted face and little girl mannerisms, and her demented attempts to recreate her childhood act in her 50s (culminating in a bizarre and skin-crawling “Writing a Letter to Daddy” dance which was weird enough watching a 12 year old perform) can’t be faulted for commitment. Davis also manages to invest the bullying and cruel Jane with a deep sense of loss, regret and guilt (for her sister’s accident) that frequently bubbles over into resentment. It’s certainly a larger-than-life performance and Davis frequently dominates the film, even if the role is basically a cartoon invested with Davis’ own grace and glamour.

It doesn’t leave much for Crawford, whose Blanche is frequently left with the more po-faced, dull and reactive lines. Crawford doesn’t often make Blanche as sympathetic as you feel she should be – although the part plays into one of her strong suits of playing the martyr – and the film saddles her with a late act twist that doesn’t have enough time and development to really make much sense. However again you can’t fault her commitment, either to screams or to a scene where she attempts to climb down the bannisters of the stairs from her trap on the upper floor, where the effort, strain and pain on Crawford’s face are astonishingly real.

Those stairs dominate many of the shots of Aldrich’s serviceable and efficient direction – although he lacks any sense of the mix of cruel poetry and dynamite sensationalism that Hitchcock bought to similar material in Psycho. But it works nicely to give a sense of Blanche’s confinement and as a visual metaphor for the trap the house feels like. Aldrich also throws in a couple of other decent flourishes, not least as Davis’ lounge turns into a proscenium stage as she imagines returning to the big time.

But the film itself is, despite it all, lacking in any sense of kindness or warmth really for either its stars or old Hollywood. We are instead invited to gasp at them in horror, while the film drags on at great lengths, stretching a very thin plot (barely a novella) into over two hours of screen time. There are effective moments, but it’s a film that seems barely serviceable today.