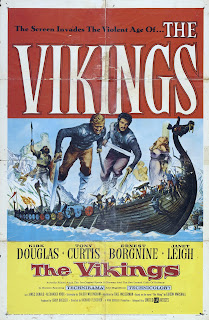 There’s a big market for stories about Vikings. Perhaps there is something attractive in our more staid world for a “noble savage” culture, with warriors romantically travelling far and wide. Perhaps a race of brave warriors just seems rather cool. Either way, despite their reputation for ravishing and raiding, Vikings often get a decent deal from films, usually positioned as a race of anti-heroes. That’s definitely what we get from Richard Fleischer’s enjoyable swashbuckler, which has a nodding acquaintance with history.

After the King of Northumbria is killed by fearsome Viking Ragnar Lodbrok (Ernest Borgnine), his queen is raped by Ragnar. Northumbria name a new King, the corrupt Aella (Frank Thring), while the queen sends her baby son (who she knows is Ragnar’s son) to Italy for his protection. Jump forward twenty odd years and, wouldn’t you know it, that young boy turns up as Eric (Tony Curtis) a slave of Ragnar’s, loathed by his unknown half-brother Einar (Kirk Doouglas), Ragnar’s son. The only person who knows who Eric is, is exiled Northumbrian load Egbert (James Donald). Things get even more complex when Aella’s intended Morgana (Janet Leigh) is kidnapped in a raid, and both Eric and Einar fall in love with her….

The Vikings is a great deal of fun, its tongue stuck firmly in its cheek. The plot veers from scene-to-scene from being too dense (various complexities around the rightful king of Northumbria get so confusing the film eventually abandons them) too being shunted off to the sides in favour of the action. But then it’s more about broad, brightly coloured action (very handsomely filmed by Jack Cardiff) with its stars having a good time fighting and shouting.

It’s interesting watching the film as almost a dry run for Spartacus, where Douglas and Curtis would re-unite. Here the film revolves around a rivalry between the two that turns into an alliance of mutual self-interest. Douglas clearly has a whale of a time playing a semi-baddie with depth, his Einar a typical “Viking’s Viking” who drinks hard, fights hard and wants a life of adventure on the high seas. But he’s also got a strange sense of nobility about home and – even though he makes a half-hearted attempt to rape her – he seems to fall genuinely in love with Morgana. Even his eventual comeuppance comes from a moment of decency. It makes for a villain more complex than normal, while Douglas roars through the movie.

Curtis is left with the duller part as the noble son-of-a-king. Looking rather too pampered for a life of serfdom, Curtis feels like a slightly too modern, New Yorkish presence for period pieces (Spartacus would use his pampered prissiness to better effect) but he charges into the sword swinging, high romance of the story with relish, while also shining during Eric’s several moments of brave principle. Morgana, very well played by his real-life wife Janet Leigh, sees a character who could have been a victimised love-interest turn into an independent and strong-minded woman, brave enough to take a stand on the things she believes in.

But the film’s real interest is in the world of the Vikings. There has been some very impressive historical research into their culture and shipping, while the battles and scenes of drunken merriment are well staged and carry a lot of boozy buzz. Most of the cast enter into relish, following Douglas and Ernest Borgnine’s lead (Borgnine, playing Douglas’ father, was at best a few months older) with plenty of shouting, ale swallowing and axe throwing. While the film’s score makes a number of odd choices – this really needed a Goldsmith or Morricone rather than the odd mix we get here – Fleischer’s direction is crisp and adept and keeps things charging forward.

The politics at the Northumbrian court gets a bit forgotten about, with Alan Thring turning Aella into a sneering, unprincipled villain who barely gets much of a look-in. However, the savage punishments that Aella meets out to his rivals – and his ruthless condemnation of anyone seen as being against him – makes a neat contrast with the Vikings who, for all their blood-curdling violence, do at least have some sort of nominal sense of justice and some willingness to compromise.

But the film’s heart is in the action. Douglas, acting as producer, jumped at the chance to take on as many of the stunts as possible – including famously walking across the oars of a Viking longboat while it is at sea (he nearly falls in twice, but it has the sort of excitement of seeing the star doing something for real that you still get with Tom Cruise). He and Curtis eagerly take part in assorted sword battles, while balancing a love/hate relationship (well probably mostly hate) that keeps the film powering forward. All in it makes for some really enjoyable B-movie shenanigans.
Email ThisBlogThis!Share to TwitterShare to FacebookShare to Pinterest
Labels: Alexander Knox, Ernest Borgnine, Historical epics, James Donald, Janet Leigh, Kirk Douglas, Maxine Audley, Orson Welles, Richard Fleischer, Tony Curtis