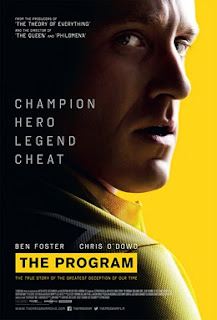 In sports there has probably never been an icon who fell so far as Lance Armstrong. Stephen Frears’ film reconstructs the story of Armstrong’s – played by Ben Foster – career, from finding his natural build and ability isn’t enough to win the Tour de France, through cancer diagnosis and recovery and then into his record-breaking run of Tour victories, all achieved off the back of running a comprehensive and professional doping system, and his final fall from grace.

Frears’ film is well-made and stylish and good at capturing the freedom and excitement of professional cycle racing. It’s also a skilled reconstruction of its time period, and a fairly well structured chronicle of events, which it reconstructs from journalist David Walsh’s (played here with a fine sense of moral outrage by Chris O’Dowd) book Seven Deadly Sins. Walsh had written stories for several years questioning Armstrong’s achievements, and Frears’ film puts together the events and testimonies that convince Walsh of Armstrong’s cheating with a documentarian skill.

Where the film fails though is its lack of drama and, crucially, its willingness to use dramatic and creative licence to attempt an exploration of Armstrong’s personality. What drove this cancer survivor to abuse his body with a parade of substances? How did Armstrong balance his passionate campaigning for a cure for a cancer with the lie he was presenting the world of how he didn’t just recover from cancer, he used it as a springboard to become the greatest endurance athlete in the world? Basically, what the film doesn’t really try to do, is get inside the head of its lead character.

Instead, the film follows its title: The Program. There is greater interest in the how of this cheating regime, not the why. Now perhaps in real life Armstrong is the shallow, narcissistic bully he often seems here, obsessed with winning at all costs with no moral quandaries at all. But it hardly makes for entertaining or satisfying drama. Foster is a brilliant physical match – and he captures the ruthless forward-drive of Armstrong very well – but this is a film that doesn’t really scratch the surface of what made Armstrong. We never get a sense of his motivations – or really his reactions as the world tumbles around him.

There is a fascinating story to tell here, but it’s almost as if the film is worried about giving this sinner some feet of clay we can sympathise with (to mix a few metaphors). Instead Armstrong is all chilled front and nothing underneath, and his villainy is so central from day one that we get neither a satisfying sense of a hypocrite unmasked nor of a Promethean fall from grace.

Actually, Frears may well have been more interested in making a film where Jesse Plemons’ Floyd Landis was a central character – the devout Christian persuaded to take part in the doping scheme, who becomes Armstrong’s successor only to be immediately discredited in a way Armstrong would not be for years. It’s the tragedy of Landis that really has dramatic potential – a decent man who is well aware what he is doing is wrong, but is too weak to not accept the easy path to glory. It’s this story that has real dramatic potential – and might well have made a better focus for the movie.

The Program isn’t a bad film. It captures the drama of its sport well, and it brings together the events that led to Armstrong’s fall with professional skill. But it’s more of documentary than a drama and to be honest there isn’t much in it that couldn’t be picked up better from actually reading Walsh’s book. There was a lot of potential here – but it needed a film more willing to explore and understand its central character rather than just condemn him as a monster and move on.
Email ThisBlogThis!Share to TwitterShare to FacebookShare to Pinterest
Labels: Ben Foster, Chris O'Dowd, Denis Menochet, Dustin Hoffman, Guillaume Canet, Jesse Plemons, Lee Pace, Sports films, Stephen Frears