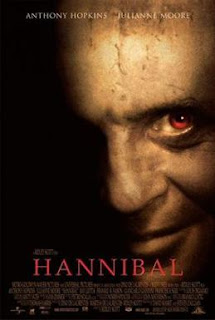 For Dino De Laurentis, The Silence of the Lambs was always the one that got away. Owning the movie rights to the Lecter character, de Laurentis allowed Orion, producers of The Silence of the Lambs, to use the character name for free. De Laurentis was desperate to make his own Hannibal Lecter film, to cash in on Lambs success – so much so he would have put any old crap on the screen so long as it was connected to Lecter. Perhaps Thomas Harris wanted to test that out with his novel Hannibal, a blatantly for-the-money piece of pulp.

Hannibal is everything that Silence of the Lambs is not. Where Jonathan Demme’s film was subtle, insidious and unsettling this is brash, gory and garish. Harris’ serial killer works always circled around the possibility of tipping into a sort of Poesque-Gothic netherworld. Hannibal dives in head first, reinventing its central character as a sort of Robin Hood of murderous psychopaths and introducing everything from vengeful faceless paedophiles, to Dantesque murders and man-eating hogs. The plot, such as it is, sees Hannibal Lecter (Anthony Hopkins) living under an assumed identity in Florence. Back in America he is being hunted not only by Clarice Starling (Julianne Moore) but also Mason Verger (Gary Oldman, unbilled under a host of make-up) who wants revenge after being hideously disfigured by Lecter. Will Lecter turn the tables on these adversaries?

Both Jonathan Demme and Jodie Foster were offered more money than they knew what to do with for this film. Both turned it down, citing the book – and its grotesque and bizarre outcome that see Lecter and Starling becoming lover-killers together – as the major factor. Foster in particular was out-spoken about how she saw the books extremity as a betrayal of the work she did with the character in the first film.

No such concern for Hopkins though, who took a bumper pay cheque to return. Hopkins always said Lecter was an easy role to play – basically a creepy voice and a lot of actorly tricks – and it certainly makes it easy for Hopkins to coast through the part here. Really Hopkins treats the role no differently from the countless chat shows where he had been asked to say “Hello Claressse”, the only real difference being he was paid about $20million to do it here. This is Hopkins on unthinking autopilot, in a film that tries to play up the black comedy but instead becomes a ludicrous, offensive farce, drowning in blood.

Ridley Scott directs and his painterly visuals and mastery of the epic shot strips comes at the cost of the very things that made the original film so involving and tense. The Hitchcockian suspense and intimacy of Demme’s direction is jettisoned. Instead everything is a dialled up to a brightly coloured 11. The entire film mistakes gore, blood and overblown, cartoonish villainy for horror. Watching people being mauled by wild hogs, or some more unfortunate being lobotomised and made to eat his own brain isn’t scary it’s more gross. And because nothing feels remotely real in this film, it doesn’t even carry much impact.

The entire film is based around the fact that it’s Hannibal we’re paying to see – especially Hopkins reprising the role – so by Jiminiy we better work a little bit to make this lethal killer from Lambs into something a bit closer to an anti-hero. So instead, Lecter is rejigged as a sort of charming, amoral cannibal. The sort of guy who prefers to eat the rude and unmannered, who loves art and is only really dangerous when provoked. The film carefully gives us reasons to dislike everyone Lecter kills, and slowly falls in love with his sinister magnetism.

This reduces Julianne Moore – in a truly thankless task – trying to both forge some sort of identity for Clarice from the story that is both unique and a continuation of what Jodie Foster did so well in the first film. It’s not entirely her fault that she fails. This is a film that depowers Clarice, that goes as far as it dares to turn her into a moth around Hannibal’s flame. The film backs away from the romance of the book (even if the film hints at it enough), replacing the eventual ending with something almost as stupid but at least doesn’t turn Clarice into a brain guzzling serial killer.

The plot flies around two arcs, one set around Hannibal in Florence the other on his return to America. Both carry no resemblance to the real world. The first does at a least have a decent performance of nervy greed from Giancarlo Giannini as the Italian detective who (wrongly) feels he can go toe-to-toe with Hannibal. The second revolves around Gary Oldman’s (unbilled – due to an argument over billing or a sly joke, depending on who you talk to) repulsive Mason Verger, a villain so revoltingly gothic you can’t believe in him for a second.

The film looks good and has a decent score, but it’s basically a claret splashed mess that can’t decide whether it’s a horror or some sort of black comedy. It settles for being nothing at all. A truly terrible movie, where everyone is there for the money and I imagine no one thought about the movie for a second once their work on it was done.
Email ThisBlogThis!Share to TwitterShare to FacebookShare to Pinterest
Labels: Anthony Hopkins, Gary Oldman, Giancarlo Giannini, Horror film, Julianne Moore, Ray Liotta, Ridley Scott, Terrible Films