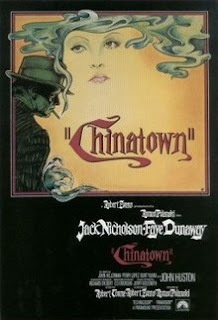 “Of course I’m respectable. I’m old. Politicians, ugly buildings and whores all get respectable if they last long enough.” So says Noah Cross in the superlative Chinatown, the sort of the film you’ll want to start watching again the second it ends. Cross is of course a respectable businessman and an absolute monster. And his mantra applies just as much to Los Angeles as envisioned by Polanski and writer Robert Towne. It’s a corrupt, dirty place where terrible, appalling things are regularly allowed to happen but everyone pretends the place is fabulous. It’s such a sublime film, while also so bleakly, despairingly dark that you are surprised you fall in love with its excellence.
In 1937 private detective JJ “Jake” Gittes (Jack Nicholson) is hired – or so he thinks – by the wife of Water Board director Hollis Mulwray (Darrell Zwerling) to investigate his infidelity. When he does seem to uncover it, he founds not only was his client not Evelyn Mulwray (Faye Dunaway), but that shortly after his pictures appeared in the press (without his knowledge), Hollis himself winds up dead, having drowned in a dry river bed. What does this all mean? And how does Evelyn’s father (and Hollis’ business partner) Noah Cross (John Huston) play into this all? Gittes investigates further, to uncover shady schemes to manipulate the cities water supply for profit, under-handed business deals and unspeakable family crimes that leave lives shattered.

Polanski’s film has such a timeless wonder about it, perhaps because it was filmed with such careful and beautifully designed classicism that it has never dated. Seen at the time as a film told in the style of the classic film noirs (although it is of course full of blazing LA sunshine), but crammed with a darkness and corruption classic Hollywood shied away from it now seems to take its place as the most masterful of Hollywood mysteries. It’s recreation of 1930s detail is perfect, while its film making is restrained, controlled, unflashy but creates an atmosphere of simmering mystery and tension behind every frame. It’s a masterfully restrained piece of film-making that deals with matters of shocking horror.

And tension there should be as this explores the darkest underbelly of America. With Jerry Goldsmith’s sublime music score under every beat – riffing on classic Hollywood tunes, but with a haunting faded grandeur that suggests a whole melancholic world going to the wall – the film looks like classic, beautiful America but uses that to counter-frame terrible, heartless acts. LA is corrupt from top to bottom. Businessmen are asset stripping the city and its surroundings to line their own pockets. Wealth brings total immunity from all sorts of crimes, regardless of how foul they are. Even family ties are polluted by terrible lusts and greed. And for Gittes, Chinatown is representative of this – a one word reference to his career as a cop, where his ability to do any good at all was forever compromised by corruption.

Jack Nicholson’s performance as Gittes is central to the film’s success. He’s in every scene and the story is told entirely from his point-of-view – so much so that when he is knocked out, Polanski slowly fades out sound and picture. Nicholson is best known for his flamboyance, but here he brilliantly underplays too present a complex picture of an idealist disguised as a cynic. Gittes tries his best to coolly accept the world is what it is, and even that he is just trying to get what he can out of it. But he’s in fact a decent and honourable man with a deep-rooted sense of morality, who struggles in the world because it’s ill-suited for a guy who just wants to do the right thing. He has a sort of outdated charm and nobility about him, an almost courtly gentleness at times, and only lashes out in anger when he feels is either being lied to or his sense of honour impugned. He has a natural sympathy for the little guy and for all he may try to spin the sort of cynical Marlowesque dialogue, you don’t feel his heart is really in it. He is a dreamer who wants to believe. 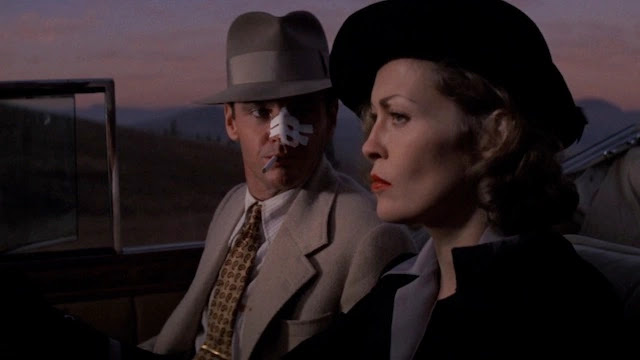 And he’s totally ill-suited to this world he ends up with. Gittes uncovers every inch of the mystery – but nothing he does has any positive impact. He completely fails to protect anyone, his attempts to ensure happy endings end in disaster, he’s regularly beaten to a pulp (most famously having his nose slit by a cameoing Polanski as a weasily little hoodlum) and he’s at sea when dealing with most of the characters of the film. Even his carefully built emotional armour breaks down, leaving him vulnerable to making even more mistakes. There are perhaps few characters so ineffective – and again it’s a credit to Jack Nicholson’s charisma that he makes this character feel like such a proactive figure.

Gittes senses at all times that there is some dark secret underpinning all these events he encounters. But he’s too innocent to begin to suspect the horrors that Evelyn has put up with at the hands of her abusive father. Faye Dunaway brings a marvellous fragility and vulnerability to a character who transcends the traditional femme fatale. (Dunaway famously hated both Polanski and working on the movie). At first seeming imperious and even suspicious, the film slowly breaks her character down into a wounded and vulnerable woman putting on a front, determined to try and protect herself but doomed to forever be the victim.

And Noah Cross is the dark heart of this. Played with a sensational sense of gentility masking supreme corruption and greed by John Huston, Cross is genteel and polite while being ruthless and grasping. He also reveals himself capable of huge, destructive acts, indifferent to the pain this causes and utterly implacable in his vileness. Huston’s performance – he’s only in three scenes – embodies the terrible dark heart of America, where money and power it seems can let you get away with anything you want, no matter who knows. (And I love the way he persistently mispronounces Gittes name, turning it into a growling Anglo-saxon "Gits".)

Robert Towne’s superb screenplay is perfectly paced and pieces together an intricate and fascinating plot where every small detail mounts together into a devastating whole. It’s a film that demands careful watching, and that revels in small details and character beats that gain greater impact the more you see the film. Brilliantly, the macguffin here is water – the control of a substance that should be a right for every man, becoming a superb metaphor for the theft from ordinary Americans of justice and their country.

The film culminates – as you feel it must when watching it – in a nihilistic ending where evil triumphs and good loses out. “Forget it Jake – it’s Chinatown”, goes the famous closing line. It works so superbly, because in Towne’s and Polanski’s vision of America here, there is no chance of the right thing winning out if the powers that be would have otherwise. With Jake’s Chinatown career in the police force becoming emblematic of everything that’s wrong in American justice, sure it makes sense that his return there as a private eye would see the same outcome. Towne pushed for a more upbeat ending, but Polanski knew – correctly – that only the shock of murder could end this tale, especially a murder that would have no repercussions.

Polanski’s direction is faultless, cool, calm, wonderfully observant with a superb sense of the 1930s – the film looks beautiful – and using the sunlight and brightness of LA to stress that just because we can see clearly, doesn’t mean we understand what we are looking at. With one of the greatest scripts ever – and a superb performance by Jack Nicholson in one of his finest roles – this is one of the best mysteries in Hollywood history, a timeless classic.
Email ThisBlogThis!Share to TwitterShare to FacebookShare to Pinterest
Labels: Burt Young, Detective story, Diane Ladd, Faye Dunaway, Film noir, Jack Nicholson, Joe Mantell, John Hillerman, John Huston, Roman Polanski