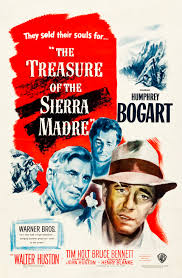 Is there anything that warps the human character more than greed? Humanity sometimes seems driven only by the desire for more, to fill our pockets with cash and leave the rest behind. It’s greed that becomes the subject of John Huston’s masterful The Treasure of the Sierra Madre – and specifically the effect it has on Humphrey Bogart’s Fred C Dobbs. If you can pick up as much gold as you want off the ground around you, why does it become so difficult to watch others take it away?

Dobbs and Bob Curtin (Tim Holt) are down-on-their-luck drifters in Mexico, bumming spare change off American businessmen and struggling on hand-to-mouth jobs for shady businessmen. So how could they resist the chance to team up with fast-talking old-timer Howard (Walter Huston) who knows that there’s gold in dem da hills? Heading into the wilderness – partly financed by Dobbs’ lucky small lottery win – the three men strike lucky and start pulling the gold from the ground. Problem is as the piles grow, so slowly does the men’s suspicion each other – not least Dobbs, who grows increasingly paranoid and unbalanced at the thought of any danger to his gold. In the wilderness of Mexico, with bandits across the countryside can the men’s growing suspicion of each other be held off long enough to get the gold back home?

Based on a novel by B Traven – an author so notoriously private that even today no one knows who he was – John Huston’s classic is part adventure story, part treatise on the human condition. It’s also gloriously entertaining at every turn. One of the first major Hollywood films to be shot largely on location, it drips with the sultry heat of Mexico, beautifully filmed by Huston. Huston’s masterful script also packs the film with a punch, from quotable titbits (most famously the oft-misquoted “Badges? I don’t have to show you any stinkin’ badges!”) to its Shakespearean touches as a rambling, mad, paranoid Dobbs walking alone through the desert wilderness like a cut-price Lear.

Dobbs is the heart of the film – and there is perhaps no anti-hero more ‘anti’ in the whole of Hollywood than this ruthlessly selfish, obsessive paranoiac. Bogart probably gives his finest performance ever as the scruffy, sweaty, unshaven and bitter drifter who finds he can’t abide the idea of having to give away any of what he sees as his share of the loot. And, worse than that, becomes convinced that the whole world is out to take it from him.

Bogart digs deep into the weasily, rat-like greed of this man. Bogart fought long and hard to play who he called “the worst shit you ever saw”. Dobbs has a strange moral code and sense of honour that’s entirely personal. Having his character impugned by others is an affront he can’t abide – though murder and violence are perfectly acceptable. He’s the sort of guy who will savagely beat a man who stiffs him for wages and then precisely take only what he’s owed from the guy’s wallet. Bogart is perfect as the cold-eyed loner who talks big at first about partnership, but later whines about how he staked most of the starter capital so should be getting a larger share of the profits. Bogart, in perhaps one of the biggest snubs in Hollywood history, missed out on an Oscar nomination in a notoriously weak year for Best Actor. Perhaps, the vision of Rick Blaine bitterly muttering to himself, covered in flies and filth, while plotting the murder of his friends in the Mexican outback was too much for the voters to take. Either way, Bogart’s late mental collapse into near-Shakespearean envy, jealousy and twitchy paranoia is as effective as it is subtly done. 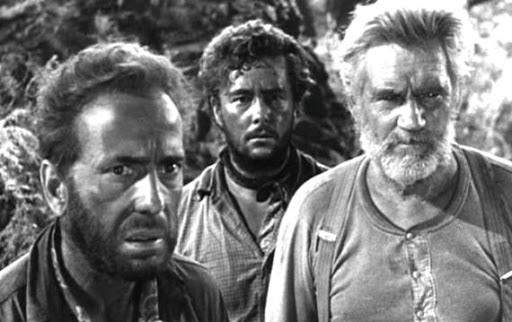 More fortunate at the Oscars were the Huston family. John had written the part of Howard for his father Walter. It bought Huston Snr the Oscar for Best Supporting Actor. Walter Huston is wonderful as this fast-talking eccentric, rocketing through his dialogue at a hundred miles an hour, as if he has lived so long through the events he is talking about that he barely has the time or patience to tell the story at a normal pace. Huston adds touches of wonderful eccentricity, to Howard’s insane jig of joy when finally finding the site of the gold, to his infectiously unrestrained cackling laughter.

Eccentric as he is though, Howard is a decent and honourable man who has every intention of sharing the gold and is well aware of its corrupting influence. The wily Howard is also the only essential member of the crew – the only one with the experience to survive in the wilderness, the only one who can recognise and knows how to mine for gold. The most loyal to the fellowship, he’s the good angel to Dobb’s bad. In the middle of this moral spectrum, John Huston places Tim Holt’s Bob, a plain-speaking, more naïve figure who has elements of both characters in his pride and hunger for gold, matched with his sense of honour and loyalty. The film partly becomes an unspoken struggle for the soul of Holt’s Bob, as we wait to see which way he will fall.

Not that any of these men are angels. They are all determined to protect what they have. Struggling in shoot-outs with bandits is fine. They even vote on whether or not to execute a fellow drifter (played by Bruce Bennett) who encounters their stake and enquires about joining them for a share. Bennett’s Cody is, by the way, the smartest character in the film, who sees with pathetic ease through the nervy lies told by the three men, as well as acutely analysing their situation and options with a sharpness that seems beyond all of them.

Of course by that point suspicion between them – specifically Dobbs and Bob – has already grown dramatically. Dobbs takes to spying on his fellows and digs a separate hiding place to which he carefully takes his own share (Curtin takes to doing the same). John Huston includes a marvellous sequence where the three men each wake up in turn during the night – and react with suspicion on noting the absence from the tent of the others. Later Bob will think long and hard before saving Dobbs from a mining cave-in. Only Howard seems less affected about the gold – although with his talk of the corruption he has seen in the past, perhaps he was a Dobbs himself in the past, now grown wiser and more accepting of the easy-come-easy-go nature of gold. 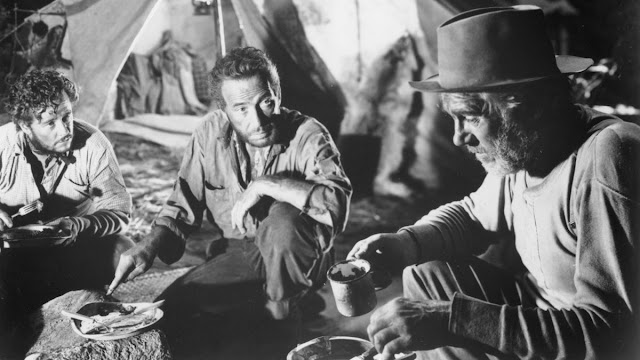 Huston’s Oscar winning script (he also lifted the Oscar for Best Director, although Best Picture went to Laurence Olivier’s Hamlet) keeps the rich vein of irony running throughout the script, even while it shows how susceptible men are to corruption. The film’s final act – and the eventual fate of the gold – is a treat, a natural extension of the films theme of mankind being a dog-eat-dog world. What else can you do but sit in the dust and laugh at it all?

There are no heroes really in The Treasure of the Sierra Madre – even the mountain remains named only in the title of the film – just three men, scruffy, seedy and not that smart, struggling to grab what they can from the earth. Life becomes more and more cheap as the film goes on – Dobbs and Curtin are like brothers at the start, but increasingly come to see both other people and each other as expendable rivals. With Dobbs like some scruffy Smaug, the film boils down to each man confronting his own emptiness. The only character with any emotional hinterland is the drifter Cody, looking for gold for his wife and kids (his story has real impact on Curtin), the rest are just living from moment to moment.

John Huston’s classic is a marvellous musing on the nature of greed and humanity, superbly filmed by Huston with not a single false note in acting or writing. Perfectly placed, it mixes a western vibe with a Shakespearean grandness – and has a simply wonderful performance by Bogart. A classic that really delivers.
Email ThisBlogThis!Share to TwitterShare to FacebookShare to Pinterest
Labels: Bruce Bennett, Humphrey Bogart, John Huston, Tim Holt, Walter Huston, Westerns