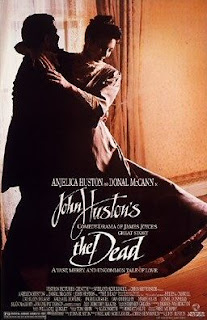 John Huston’s final film was a long-standing passion project, anfaithful adaptation of James Joyce’ short story from The Dubliners. Huston had only a few months to live when shooting the film – he was hooked up to an oxygen supply for the course of its film-making and confined to a wheelchair. His children Anjelica and Tony (who wrote the screenplay) helped to nurse him through this final project. The final film makes for a beautiful wistful, heartfelt and tragically toned story that’s small in scale but carries great emotional force.  It’s a beautiful adaptation.

The film is set at a Christmas house party for family and friends, a regular thrown by two spinster sisters, Julia (Catheen Delany) and Kate (Helena Carroll) Morkan. The soiree – with recitals, dancing and wonderful meal – is an annual treat, with a regular guest list of family and old friends. The Morkan’s nephew Gabriel (Donal McCann) frequently serves as unofficial master of ceremonies – this year nervously checking and rechecking his after-dinner speech. However, at this year’s dinner Gabriel’s wife Gretta (Anjelica Huston) is caught-off-guard by a moving song, that brings back to her a flood of memories from her younger days of a late first love – a revelation of a past life that in their bedroom after the party, stuns Gabriel and causes him to reassess everything he thought he knew about his wife’s past and how his own life has been bereft of the sort of passion she has displayed over a memory.

The summary above essentially captures the entire story of this James Joyce tale that is short on events but deeply long on emotional meaning. Critics have sometimes said it can only be a shadow of the original – but it’s an adaptation not a replacement. Huston’s film is a gentle, unhurried, carefully presented chronicle of everyday lives and the emotional depth that’s can lie buried beneath them. The Dead is short on flash, but it has such warmth, love and respect for its characters, and vibrancy in its playing that it hardly matters that for almost an hour nothing (as such) actually happens. Instead, Huston and his actors so completely understand and communicate the warm bonds between its characters – from decades of knowing each other – and the entire party has such an air of truth to it you can genuinely just enjoy watching the characters enjoy it.

It’s full of perfectly observed moments that ring true – and all straight from Joyce. The younger men who attend the party, and duck out of a gorgeous piano recital for a quick drink, to return and lead vigorous applause at its end. The awkwardness of small talk between two people that don’t really know each other, but are too polite to turn away. The affectionate indulgence of the drunken son of an old friend (“sure, he’s not as bad as he was last year”) who is quietly not passed the port and leads a praise for Julia’s slightly-off-note singing that is so lavish it manages to be as touchingly well-meant as it is grin-inducingly embarrassing. Huston had a long-held regard for the warmth and generosity of Irish hospitality and feeling and this seeps into every pore of the film.

But the film is stuffed full of moments of simple, real-world pleasure crafted by a director who understood that the impact of the stories late emotional revelations depended on the everyday low-key presentation of the film’s first hour. And there is no end of delight be had from the Morkan sister’s tearful pleasure and pride at Gabriel’s sincere speech of gratitude at the dinner’s end (even if it is overladen with classical parables). Or in the quietly supportive way Gabriel goes about organising events for them in the house, from shepherding the tipsy Freddy to a bathroom to sober up to ending events by gently wakening Protestant Dan Browne at the party’s end from his drunken doze in the cloakroom. Around all these events is the conversation of people who have known each other for years and are comfortable to sink back into the patter of familiar themes.

All of which is then perfectly counter-pointed by Gretta’s quiet revelation of a past of passion and deeply held first love that she has never spoken of before – and causes Gabriel to certainly look anew at everything in his life. It’s a sad and delicate Proustian revelation of how the slightest nudges to our memory (in this case the soulful rendition of an old Irish song) can unlock sudden wells of feeling, making events from years ago suddenly seem as painfully recent as yesterday.

For suddenly Gabriel moves from initial jealousy into a deep and abiding sadness at how nothing in his own life could ever have motivated such depth of feeling from himself – that frankly he has nothing in his experience to match the grief and unforced emotion his wife has displayed. It’s a very Joycian revelation in which the present and the future is readdressed in light of the past. Suddenly Gabriel must reflect that his life has been one of competent and forgetful mediocrity and that he himself will die – and that fate awaits us all, with the snow falling on us all living or dead, and that Gabriel will forever lack the emotional depth and poetry to express it.

The film’s elegiac qualities match perfectly with the end of Huston’s career – and maybe the sad regret of Gabriel is Huston judging whether he made an impact either. The film however is beautiful, recreating Ireland perfectly in California with a superb cast of Irish theatre stalwarts specially imported. Donal McCann is wonderful as Gabriel, Anjelica Huston quietly moving as his wife while the rest of the cast are faultless: from Cathleen Delany and Helena Carroll’s carefully judged spinsterish generosity to Donal Donnelly’s garrulously friendly drunkenness (perhaps motivated by the impossibility of living up to his mother’s – an imperious Marie Kean – high standards). The Dead may not capture all the depth and beauty of Joyce’s writing (what can?) but it captures more than enough to be a beautifully judged film.
Email ThisBlogThis!Share to TwitterShare to FacebookShare to Pinterest
Labels: Anjelica Huston, Colm Meaney, Dan O'Herlihy, Donal McCann, Helena Carroll, John Huston, Literary adaptations, Marie Kean, Rachael Dowling